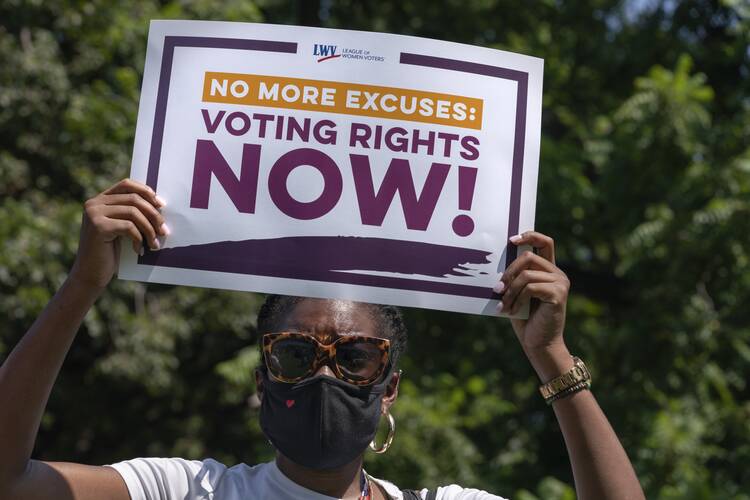 LaQuita Howard of Washington, with the League of Women Voters, attends a rally for voting rights, Tuesday, Aug. 24, 2021, near the White House in Washington. (AP Photo/Jacquelyn Martin)

On Aug. 28, the 58th anniversary of the March on Washington for Jobs and Freedom at which Martin Luther King Jr. gave his “I have a dream” speech, people will take to the streets again in an event called March On for Voting Rights. The original March on Washington, directed by leaders from the N.A.A.C.P. and the Southern Christian Leadership Conference, took place with support from many U.S. bishops (the U.S. Conference of Catholic Bishops had not yet been formed), as well as Catholic interracial councils, parishes and other groups around the country. This year’s march deserves similar support from the Catholic community.

Hundreds of restrictive voting laws are being introduced and passed across the country—purportedly to deter voter fraud, though fraud has not proven to be a significant problem in U.S. elections. Such laws now face much less scrutiny under the 1965 Voting Rights Act, which has been effectively dismantled because of Supreme Court decisions in 2013 and again this year. According to the organizers of the march, the new laws “suppress voting methods that enrich our democracy and lead to high turnout.”

Hundreds of restrictive voting laws are being introduced and passed across the country—purportedly to deter voter fraud, though fraud has not proven to be a significant problem in U.S. elections.

The U.S. bishops recently wrote a letter to Congress urging lawmakers to “ensure that legal and other hurdles do not obstruct any eligible Americans from exercising their right to vote in form or effect,” especially people of color. They have remained largely silent regarding specific legislation, however. Meanwhile, in May, the National Black Sisters’ Conference and the Leadership Conference of Women Religious issued a joint statement supporting national voting rights measures, such as the For the People Act, and condemning “laws that limit participation and threaten our democracy.” Though neither group has officially co-sponsored the August march, the L.C.W.R. is sharing virtual resources for those who cannot attend in person, and member congregations are promoting participation and developing their own virtual resources.

Aug. 28 is also the feast day of St. Augustine, and his wisdom should motivate us to march in solidarity with those vulnerable to disenfranchisement. Indeed, his conception of justice as “right relationships” grounded in love resonates with Dr. King’s vision for a “beloved community” and can inform contemporary voting rights advocacy.

The interplay between internal character and public action is a key feature of Augustinian ethics. For Augustine, the virtue of justice orders our internal lives so we can express each facet of ourselves wholly and authentically. Justice brings our intellects, emotions, bodies and wills into alignment. When our internal selves are rightly ordered, we recognize both our limits and our unique significance, and we are impelled to share our gifts with the community—and to empower our neighbors, who are equally significant, to do the same.

By advocating for voting rights, we reinforce our soul’s ability to recognize the dignity of our neighbors.

Justice as an internal virtue motivates our pursuit of right relationships in the public realm, but this private-public connection works both ways, as practicing justice externally helps us to develop the virtue. By advocating for voting rights, we reinforce our soul’s ability to recognize the dignity of our neighbors.

Justice, then, is personal as well as structural. Though Augustine is skeptical of the extent to which any system of government can foster authentic justice, he nevertheless maintains that political authorities are obligated to issue laws that facilitate the common good, and citizens should object to those laws that fail to do so. For Augustine, as for Dr. King, one cannot claim to have the virtue of justice if one acquiesces to unjust systems.

A national ethos that marginalizes the experiences of people of color and of the economically disadvantaged is incapable of facilitating the common good, which is one reason why voting rights advocacy is a critical practice of justice. Whatever else the common good entails, we will approximate it only if every person can contribute her voice meaningfully to defining what is good in the collaborative effort of building a just society. The right to vote without unnecessary or unequal impediments is one important means of ensuring that all citizens can participate fully in these democratic efforts.

If we are to live freely in our God-given dignity, then, we must reject repressive structures and develop just ones in which all people can participate freely. This may require us to look past our preconceived convictions so we can truly see our neighbors. And the voting rights issue requires a keen eye. As Kristin Mattson has emphasized, many restrictive voting laws, “though largely neutral on their face, disproportionately impact people of color.”

It’s too difficult for ‘ordinary’ people to run for office. The For the People Act can change that.
Matt Keller

When faced with injustice, we can choose to shut our eyes and live in “the darkness of destructive selfishness,” as Dr. King puts it, or we can choose to see our neighbors—to walk, as he says, “in the light of creative altruism.” The former path obstructs our moral vision by directing our focus inward; the latter helps us to maintain a worldview wide enough to engender solidarity. It is perhaps propitious that Augustine is the patron saint for those with sore eyes.

This summer, as Catholics are embroiled in controversies surrounding the U.S. bishops and their eucharistic coherence document, as well as the Latin Mass, we can easily succumb to the tendency to focus inward on our religious tradition. But these internal tensions should not blind us to external injustices or distract us from promoting the common good in public life. Indeed, actions that promote the common good are themselves eucharistic: They build a community of love.

If Catholics can recognize this integral connection between private virtue and public justice, then we can help to foster right relationships and build the beloved community. On Aug. 28, we should celebrate Augustine’s feast day by seeing our neighbors with the eyes of love and standing together in eucharistic justice as we advocate for democratic freedom.