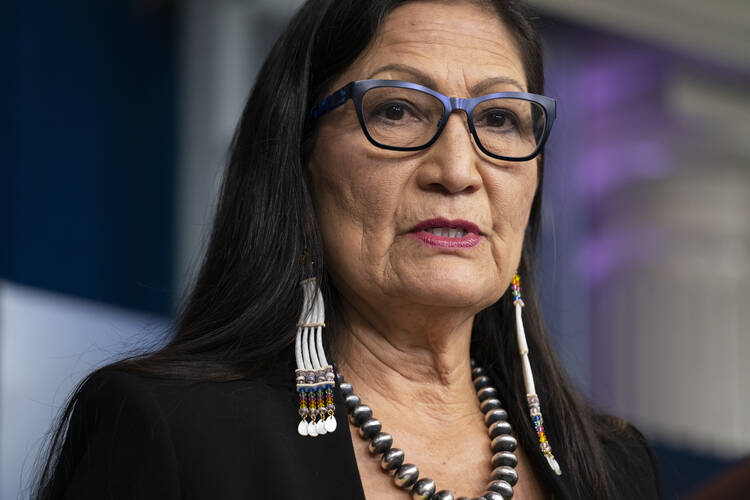 In this April 23, 2021, file photo, Interior Secretary Deb Haaland speaks during a news briefing at the White House in Washington. On Tuesday, June 22, 2021, Haaland and other federal officials are expected to announce steps that the federal government plans to take to reconcile the legacy of boarding school policies on Indigenous families and communities across the U.S. (AP Photo/Evan Vucci, File)

Responding to the announcement of a Department of Interior initiative that will look at the history of Native American boarding schools and seek to identify the possible grave sites of a still-unknown number of Indigenous children, the U.S. Conference of Catholic Bishops, through its spokesperson Chieko Noguchi, issued a cautious statement on June 28, noting that the conference would “look for ways to be of assistance” to the Interior Department’s investigation:

“We are deeply saddened by the information coming out of two former residential boarding school sites in Canada,” Ms. Noguchi said. “We cannot even begin to imagine the deep sorrow these discoveries are causing in Native communities across North America.

“It is important to understand what might have occurred here in the United States,” she said. “Therefore, we are following closely the announcement last week by the Department of the Interior of a formal inquiry into residential boarding schools. The United States Conference of Catholic Bishops will look for ways to be of assistance.

“We are deeply saddened by the information coming out of two former residential boarding school sites in Canada. We cannot even begin to imagine the deep sorrow these discoveries are causing in Native communities.”

“By bringing this painful story to light, may it bring some measure of peace to the victims and a heightened awareness so that this disturbing history is never repeated,” she said.

Beginning in 1819 and continuing through 1969, the U.S. government provided the resources and logistical support for the schools and the Catholic Church and other religious denominations administered them. The schools were intended to assimilate Indigenous children.

Catholic orders in the United States administered 84 of the schools. The Society of Jesus managed four of them.

In Canada hundreds of graves have been detected with ground-penetrating radar at two the sites of two former residential schools in Canada in recent weeks. Thousands more are expected to be discovered as other sites in Canada are investigated. A six-year investigation by Canada’s Truth and Reconciliation Commission uncovered multiple accounts of brutality, neglect and sexual abuse within the residential schools network.

The Department of Interior is for the first time in U.S. history being led by a Native American. On June 22 Secretary of the Interior Deb Haaland ordered the investigation into the history of U.S. boarding schools, which had served as the model of the Canadian network, and a search for the graves of the children who died at them. The initiative represents the first formal national effort to investigate the history of the Indigenous schools in the United States, though it is not the first time the federal government has attempted to acknowledge what Haaland referred to as a “dark history.”

More than two decades ago, Assistant Secretary of Indian Affairs Kevin Gover issued an apology for the emotional, psychological, physical and spiritual violence committed against children at the off-reservation schools. Then in 2009, President Barack Obama quietly signed off on an apology of sorts that was buried deep in a multibillion-dollar defense spending bill; the language had been watered down from the original legislation introduced years earlier.

A member of New Mexico’s Laguna Pueblo, Ms. Haaland outlined the initiative while addressing members of the National Congress of American Indians during the group’s midyear conference. Ms. Haaland said she hoped it would “shed light on the unspoken traumas of the past.”