Pope Francis meets with Secretary of State Antony Blinken to discuss ‘hot button issues’ like the Middle East, the Holy Land and China 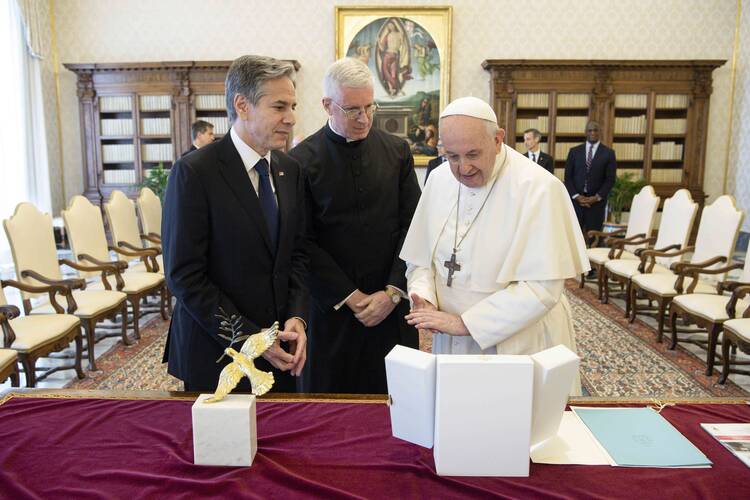 Pope Francis exchanges gifts with U.S. Secretary of State Antony Blinken during an audience at the Vatican June 28, 2021. Blinken presented a sculpture to the pope of a dove holding an olive branch. (CNS photo/Vatican Media)

Pope Francis received the U.S. Secretary of State, Antony John Blinken, in a private audience in the library of the Apostolic Palace this morning, June 28, “for around 40 minutes in a cordial climate,” the Vatican stated afterwards.

Before the papal audience, Mr. Blinken had a 45-minute conversation with Cardinal Pietro Parolin, the Vatican secretary of state, and with Archbishop Paul Gallagher, the secretary for relations with states. Informed Vatican sources told America that during the meeting they “touched on all the hot button issues, including the situation in the Middle East, the Holy Land and China.” The time for their meeting was limited because of the tight schedule of all the participants involved, including the pope, a source said.

The U.S. State Department issued a statement on the secretary’s trip to Europe, which ends on June 29, that said he would meet with senior Holy See officials “to underscore our shared commitment to freedom of religion or faith and tackling the climate crisis.”

Vatican sources said that during the meeting they “touched on all the hot button issues, including the situation in the Middle East, the Holy Land and China.”

The Vatican issued a statement after Mr. Blinken’s visit but shared little information about the content of those conversations in the Apostolic Palace, except to say that during the conversation “Pope Francis recalled the visit he made [to the United States] in 2015 and expressed his affection for and attention to the people of the United States of America.”

Mr. Blinken is the second top official of the Biden administration to be received in private audience by Pope Francis this year. The first was the U.S. special envoy for climate, John Kerry, on May 15.

The visits of the two members of the U.S. administration to the pope are seen in Rome as the lead-up to the much-anticipated visit of President Biden, the second Catholic president of the United States, with Pope Francis. That visit is expected at the end of October, when the U.S. president visits Rome for the important meeting of the heads of the G20 states. The G20 summit brings together leaders of the world’s 20 chief economic powers. Mr. Biden and Pope Francis may also meet in Glasgow at the opening session of Cop26, the U.N-sponsored conference on climate change, in early November.

Pope Francis and Mr. Biden have already met three times—in 2013, 2015 and 2016—when Mr. Biden was vice president, and the chemistry between the two appears to be good. The relations between the Holy See and the Biden administration are much more positive and friendlier than with the previous U.S. administration.

The Holy See has welcomed the positive approach of the United States to many of the issues that are close to the pope’s heart, including climate change, concern for peace in the Middle East and in the Holy Land in particular and the need to combat Covid-19 and address the immigration question.

Top Vatican officials (who did not want to be named) have told America they do not share the apparent desire of some members of the U.S. Conference of Catholic Bishops to consider denying Communion to President Biden and other Catholic politicians over the abortion question, as was evident from the letter sent by Cardinal Luis Ladaria to Archbishop José Gomez of Los Angeles, president of the U.S.C.C.B., shortly before the bishops’ virtual meeting this month.

Pope Francis and Mr. Biden have already met three times—in 2013, 2015 and 2016—when Mr. Biden was vice president, and the chemistry between the two appears to be good.

Before his meeting with the pope, Mr. Blinken was given a private, early morning tour of the Apostolic Palace and the Sistine Chapel, where Francis was elected pope in the conclave of March 13, 2013.

Mr. Blinken came to Rome after visiting France and Germany and before traveling to southern Italy for a meeting with the foreign ministers of the G20 states at Matera and Bari.

The members of the G20 are: Argentina, Australia, Brazil, Canada, China, France, Germany, India, Indonesia, Italy, Japan, Republic of Korea, Mexico, Russia, Saudi Arabia, South Africa, Turkey, the United Kingdom, the United States, and the European Union. This time, however, in the clearest sign of rising geo-political tensions, China and Russia decided not to send their foreign ministers in person to the meeting, but they will participate virtually.

On the previous day in Rome, June 27, Mr. Blinken met the Israeli foreign minister, Yair Lapid. It was the first top-level meeting between a representative of the new Israeli coalition government and the Biden administration and came at a time when discussions are underway in Vienna over the possibility of the United States rejoining the Iran nuclear treaty.

During his visit in Paris, Mr Blinken had expressed his hope of seeing the emergence of “conditions which may allow the relaunching of a peace process and the establishment of two states, Israel and Palestine.” He said: “I think the conditions are not there. We have to work on it. And that’s what we will do.” At the same time, he emphasized the importance of avoiding provocations in the Holy Land that could revive violence in the coming weeks and months.

After his visit to the Vatican, Mr. Blinken was scheduled to co-chair a meeting of the International Coalition against the Islamic State. The group was created in 2014 and involves over 80 countries, led by the United States. ISIS remains active in Syria and Iraq.

The State Department’s statement said that Mr. Blinken would also participate in a discussion of the crisis in Syria, focusing on humanitarian needs. He will also have bilateral meetings with President Sergio Mattarella of Italy and Foreign Minister Di Maio to underscore the important role of the U.S.-Italy partnership in addressing key global priorities.

In Bari and Matera, the secretary of state will attend the G20 foreign ministers’ meeting “to reinforce the U.S. commitment to multilateralism and discuss continued cooperation in combating the Covid-19 pandemic, addressing the climate crisis, and building back better with our global partners, with a focus on Africa.”