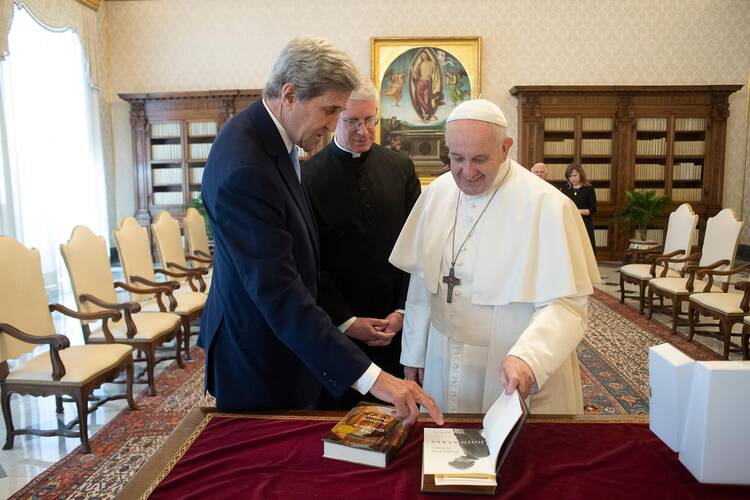 A smiling Pope Francis welcomed John Kerry, President Joseph R. Biden Jr.’s special presidential envoy for climate, in a private audience at the Vatican this morning, May 15. It was the second time they spoke together at length; they last met in 2016, when Mr. Kerry was U.S. Secretary of State.

Vatican Media photos revealed a relaxed and friendly atmosphere for the face-to-face private conversation (with the assistance of a Vatican interpreter) in the private library of the Apostolic Palace. The two also exchanged gifts. Mr. Kerry gave Pope Francis a copy of his autobiography, Every Day Is Extra, and the Pulitzer-winning environmental novel The Overstory by Richard Powers. Pope Francis gave Mr. Kerry a signed copy of his message for World Peace Day, a collection of his encyclicals and a sculpture of a grapevine.

The warm welcome and positive atmosphere was hardly surprising, as Vatican sources told America that Pope Francis is very pleased that the United States under Mr. Biden has rejoined the Paris Climate Agreement and has committed itself to taking strong action both at home and abroad to address climate change. Mr. Biden also plans for the United States to play a leading role at the 26th UN Climate Change Conference of the Parties (COP26) in Glasgow next November, a gathering of nations that have signed on to the Paris accords of 2015.

After his meeting with the pope, Mr. Kerry also had a private conversation with the Vatican’s Secretary of State, Cardinal Pietro Parolin.

Vatican sources told America that Pope Francis is very pleased that the United States under Mr. Biden has rejoined the Paris Climate Agreement.

Because the Vatican did not issue any statement after the two private encounters, as is normal on occasions that do not involve a head of state, there is no official indication as to what topics were discussed, though climate change and the U.S. role in addressing it were likely at the heart of the discussions. The rapidly expanding crisis in the Holy Land was also likely discussed, as Pope Francis and the Vatican are deeply concerned at the immense destruction and loss of life in the ongoing violence.

Mr. Kerry spent about one hour in his two conversations in the Vatican, and afterwards drove to the Vatican Media (formerly Vatican Radio) office where he sat down for interviews, before traveling to London and Berlin for meetings with European leaders on the climate crisis.

Asked why he came first to visit Pope Francis, Mr. Kerry (who is Catholic) said, “the pope is one of the great voices of reason and compelling moral authority on the subject of the climate crisis. He's been ahead of the curve. He's been a leader. His encyclical ‘Laudato Si’’ is really a very, very powerful document, eloquent and morally very persuasive.” Mr. Kerry said he believes that Pope Francis “will be a very important voice leading up to and through the Glasgow conference, which I believe he intends to attend.” Mr. Kerry was also overheard telling his staff that the pope would attend the Glasgow conference.

Mr. Kerry said he believes that Pope Francis “will be a very important voice leading up to and through the Glasgow conference."

Mr. Kerry emphasized that Pope Francis “speaks with a moral authority that is quite separate. It’s unique and we need all the power we can bring to the table.” He told Vatican News that “we need everybody in this fight. All the leaders of the world need to come together and every country needs to do its part.”

Vatican sources told America that the invitation to COP26 from the United Kingdom, which is hosting the meeting together with Italy, has not yet arrived in the Vatican, though it is expected soon.

Asked what the United States can do to get countries to come together to address climate change, Mr. Kerry said, “there are differences, of course. And those differences have been embraced in the language of the Paris Agreement” but “we all have a common responsibility, that's key. No country is exempt from needing to take measures to deal with this crisis.”

On the other hand, “we don't expect a very small economy, a very small country, and a very small emitter of greenhouse gases to step up and do the same thing we're going to do. We accept [that] we are the second largest emitter in the world. China's first; behind us is India, and then you have Russia and other countries coming. But the bottom line is this: No one country can solve this problem. We all have to take steps and the issue is finding the...point at which people are doing what they reasonably should be expected to do and can do.”

Mr. Kerry said, “the United States has to put up its fair share of funding for adaptation for resilience.” He said President Biden “has set a target of reducing our emissions over the next decade by 50 to 52 percent. But we need other big emitting countries to step up and also offer some reductions.”

"The Holy Father speaks with special authority to our sense of obligation to each other."

“If the United States was at zero-emissions tomorrow, we’d still have a crisis,” he said, noting that twenty countries are responsible for about close to 75 percent of worldwide greenhouse gas emissions. “Those 20 countries, which are the most developed in the world, have a special responsibility.”

Mr. Kerry added that the fight against climate change can also have economic benefits, noting that two of the three fastest-growing job markets in the United States last year were for wind turbine technicians and solar panel installers. In addition to creating millions of new jobs, he noted, “We can have cleaner air. We can have better health. We can have less cancer. We can have less air problems where people are choking and kids are going to the hospital in the summer because of environmentally induced asthma. And we can be more secure in our nation's because we can depend on energy that's at home—renewable energy, alternative energy, sustainable energy.”

“The Holy Father is one of the, if not the, most powerful voices on the planet and he's been extraordinary in the eloquence of his call on people to to step up and be reasonable and to live out our responsibility as human beings in caring for God's creation,” Mr. Kerry stated. “Because he is above politics and outside of the hurly-burly of day-to-day, national conflict, I think he can sort of shake people a little bit and bring them to the table with a better sense of our common obligation.”

“I think that the world has a special respect for Pope Francis and there is no question that he has already been a significant leader in this endeavor. And we look to him for further guidance and help in getting this job done.”

Mr. Kerry concluded by noting that “big, powerful nations like the United States have had the ability over years to be emitting and growing, but now we're at the day of reckoning with respect to the consequences of the way we've been growing. And I think that the Holy Father speaks with special authority to our sense of obligation to each other, and the ways in which we need to all step up now together, given the divisions of the world and some of the polarization and the ideology and conflict. That voice is more important than ever.”