Refugees have a right to stay in their homelands, too. How can we make it safer for them to do so? 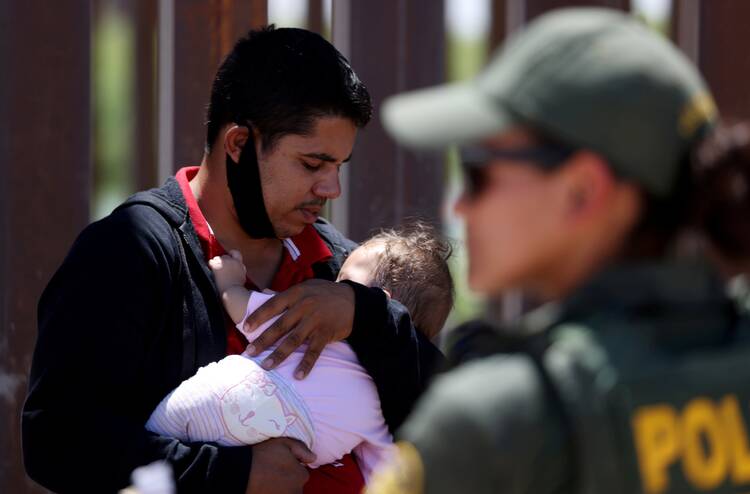 A man from Brazil holds his 9-month-old daughter in Andrade, Calif., on April 19, 2021, as they wait to be transported by Border Patrol after crossing into the United States from Mexico. (CNS photo/Jim Urquhart, Reuters)

Latin American refugees end up on our border the way African and Middle Eastern refugees end up on the shores and borders of Europe. What we do with them matters, for they are our neighbors. We need humane solutions. Unfortunately, our current immigration system is mostly about deterrence. Our policy solutions are one-dimensional: We only see things from this side of the border, and we neglect other perspectives on the migration crisis.

The right to stay in one’s own land should be taken as seriously as the right to emigrate. This is part of Catholic social teaching, but we rarely hear about it. So it gives me a little hope when leaders like Vice President Kamala Harris speak about the root causes of migration. According to The Los Angeles Times, Ms. Harris said to a virtual meeting of immigation and asylum policy experts on April 15 that she would be guided by the belief that most people do not want to leave their nations of birth unless they feel they have no choice. The Times quoted Ms. Harris as saying people should be given “some hope that if they stay at home, help is on the way.”

The right to stay in one’s own land should be taken as seriously as the right to emigrate. This is part of Catholic social teaching, but we rarely hear about it.

Vicki Gass, a policy adviser for Central America at Oxfam International, recently posed a question along similar lines to The New York Times reporter Giovanni Russonello: “How do you address the issues of people living on the ground, who will never get asylum, who don’t necessarily want to leave their countries, but who are forced to leave because the governments haven’t done a good job of allowing for them to stay?”

That question points us to better ways of responding to the migration crisis. I offer three of them as a Catholic and as an Iraqi immigrant who knows firsthand the anguish of being torn “from the nourishment of tradition, family and geography,” as Edward Said wrote in an essay on exile.

First, we need to create safe, efficient and timely legal channels for asylum seekers tailored specifically to those from our own hemisphere. We can do this first by setting up asylum agencies at the countries of origin. That is, we can go to them rather than wait until they travel all the way to us. The criteria for asylum should be clear but not overly burdensome; they must be discerning but not crushing to people who live in fear.

We can do set up asylum agencies at the countries of origin. That is, we can go to them rather than wait until they travel all the way to us.

The establishment of asylum channels at countries of origin can go hand-in-hand with the expansion of charitable efforts in these same countries. There is no reason why organizations like Catholic Charities USA should not work closely with possible emigrants and with American immigration officers in those countries. Would-be refugees should receive fair consideration for legal immigration, but charities on the ground should also be there to help those who do not qualify.

I understand that in many of these countries, organized crime can be as powerful as the government and can thwart charitable work. But that is never a cause for giving up, or not getting started in the first place. Charitable services should go beyond the “give a family a box of food” model and help rebuild communities.

Second, we need to target the sources of the refugee crisis: the poverty, violence and lack of stability in the lands of origin. That means working with the governments of these lands to create a human ecology conducive to their common good. There is also a need for U.S. companies to invest in these nations—but without plundering the people and their land.

We need to target the sources of the refugee crisis: the poverty, violence and lack of stability in the lands of origin.

Diplomats need to be on the ground, working with governments to make it possible for people to live in their own lands. Sometimes this is as simple as asking local politicians: “Do you really want to see your country emptied of its people?” We should make it difficult for them not to care. This includes finding creative ways to help these governments address the powerful gangs operating within their territories.

Many times the government takes assistance money and it never reaches the people. This objection is valid, and I have heard from refugees about that very problem in Iraq. But again, it doesn’t mean we throw up our hands and say it is a lost cause. We need to think creatively about how we can go around corrupt governments through charitable agencies who are more capable of getting things done in local communities.

Third, charity organizations should help to educate people in countries of origin about the treacherous journey of migration for unaccompanied minors. Pamphlets could explain the requirements and legal channels of immigration; the dangers of this journey for children; safer ways to obtain help; and other information to help families make better decisions.

There are times when emigrating is the answer; people have a right to move, and receiving communities must find humane ways to integrate refugees. But sometimes helping people to stay put and to build better countries for themselves is more respectful of their human dignity.

As an immigrant, I have found that many people, no matter where they are on the political spectrum, seem to have only one answer to hardships: “Move!” “Emigrate!” “Go somewhere better!” But there is something deeply wrong with the belief that whenever things get bad, it is best to just pick up and go. This thinking completely neglects people’s roots—their communities, countries and cultures. 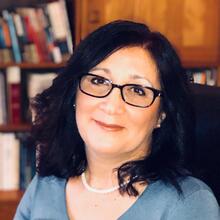