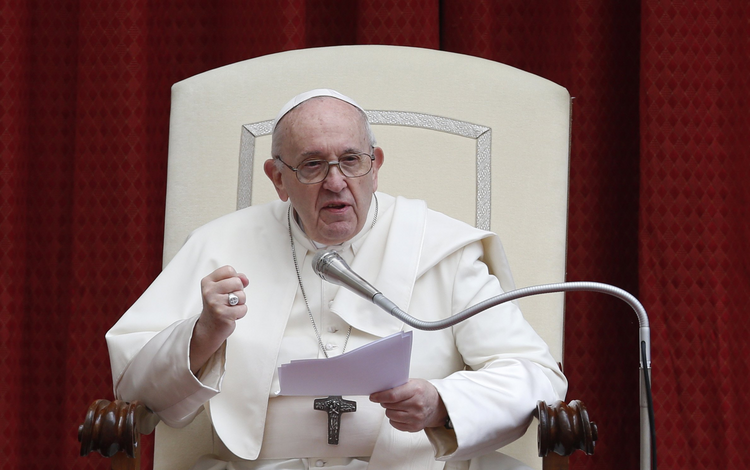 Pope Francis leads his weekly general audience in the San Damaso Courtyard of the Apostolic Palace at the Vatican May 12, 2021. It was the first time in more than six months that visitors and pilgrims have been able to attend the audience. (CNS photo/Paul Haring)

ROME (AP) — Pope Francis met Thursday with Argentine President Alberto Fernandez, months after Argentina legalized abortion despite a personal appeal from the pontiff and opposition from the Catholic Church.

In a break with usual practice, the Vatican communique about Fernandez’s visit omitted any reference to issues discussed between the president and pope. The brief statement provided only a rundown of topics Fernandez discussed with the Vatican secretary of state and foreign minister: the pandemic, Argentina’s financial crisis and its fight against poverty.

The meeting took place in a side study off the Vatican’s auditorium rather than in the Apostolic Palace, where official state visits are usually held. The location, often used for less formal meetings, is where Francis received Queen Elizabeth II in 2014.

It’s the second time Francis and Fernandez have met and added yet another wrinkle in the Argentine pope’s sometimes strained relationship with the governments of his native country.

It’s the second time Francis and Fernandez have met and added yet another wrinkle in the Argentine pope’s sometimes strained relationship with the governments of his native country. He has declined to return home since his 2013 election, friends say, because he wants to avoid being used for political ends by the reigning government.

Argentina’s abortion law, which Fernandez firmly supported, went into effect in January. It guarantees the procedure up to the 14th week of pregnancy and beyond that in cases of rape or when a woman’s health is at risk.

Fernandez, a Peronist, had campaigned on pledges to make abortion legal and free. Argentina thus is the largest nation in Latin America to legalize elective abortion, a development feminist movements have hailed and that could pave the way for similar legislation across the socially conservative, heavily Roman Catholic region.

Pope Francis: Prayer can be a struggle. That’s normal. Embrace it.
Pope Francis

Francis, who has repeatedly denounced abortion as evidence of today’s “throwaway culture,” issued a last-minute appeal before the December vote, noting in a tweet that Christ was born as an outcast, and “came into the world as each child comes into the world, weak and vulnerable.”

Fernandez is in Italy as part of a European tour that also included Portugal, Spain and France.