Pope Francis: Prayer can be a struggle. That’s normal. Embrace it. 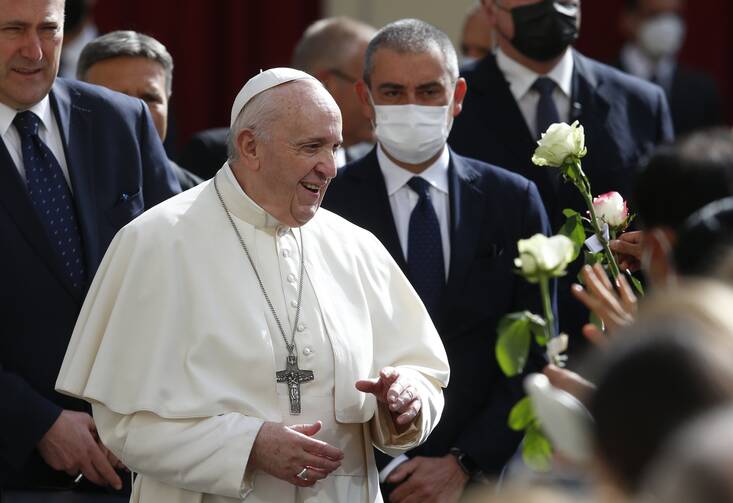 Pope Francis greets people during his weekly general audience in the San Damaso Courtyard of the Apostolic Palace at the Vatican May 12, 2021. It was the first time in more than six months that visitors and pilgrims have been able to attend the audience. (CNS photo/Paul Haring)

Below is the text of Pope Francis’ weekly Wednesday audience, delivered on May 12, 2021.

I am happy to resume this face-to-face meeting, because I will tell you something: it is not nice to speak in front of nothing, to a camera. It is not nice. And now, after many months, thanks to the courage of Msgr. Sapienza, who said, “No, we’ll do it there”, we are gathered here again. Msgr. Sapienza is good! And finding people, finding you here, each one of you with your own story, people who come from all over, from Italy, from the United States, from Colombia… That little football team of four Swiss brothers, I think… who are over there… four. The little sister is missing, I hope she arrives… And seeing each one of you pleases me as we are all brothers and sisters in the Lord, and looking at each other helps us to pray for each other.  Also people who are far away but always make themselves close to us. The ever-present Sister Geneviève who comes from Lunapark, people who work... So many. They are all here.

And speaking of prayer, Christian prayer, like all Christian life, is not a “walk in the park.” None of the great people of prayer we meet in the Bible and in the history of the Church found prayer “comfortable”. Yes, one can pray like a parrot – blah, blah, blah, blah, blah – but that is not prayer. Prayer certainly gives great peace, but through inner struggle, at times hard, which can accompany even long periods of life.

Christian prayer, like all Christian life, is not a “walk in the park.” None of the great people of prayer we meet in the Bible and in the history of the Church found prayer “comfortable.”

Praying is not something easy, and this is why we flee from it. Every time we want to pray, we are immediately reminded of many other activities, which at that moment seem more important and more urgent. This happens to me too! It happens to me. I go to pray a little… and no, I must do this and that… We flee from prayer, I don’t know why, but that is how it is. Almost always, after putting off prayer, we realize that those things were not essential at all, and that we may have wasted time. This is how the Enemy deceives us.

All Godly men and women report not only the joy of prayer, but also the tediousness and fatigue it can bring: at times it is a difficult struggle to keep to the time and ways of praying. Some saints continued it for years finding any satisfaction in it, without perceiving its usefulness. Silence, prayer and concentration are difficult exercises, and sometimes human nature rebels. We would rather be anywhere else in the world, but not there, in that church pew, praying. Those who want to pray must remember that faith is not easy, and sometimes it moves forward in almost total darkness, without points of reference. There are moments in the life of faith that are dark, and therefore some saints call this “the dark night”, because we hear nothing. But I continue to pray.

The Catechism lists a long series of enemies of prayer, those that make it difficult to pray, that put us in difficulty (cf. nos. 2726-2728). Some doubt that prayer can truly reach the Almighty: why does God remain silent? If God is Almighty, He could say a couple of words and end the matter. Faced with the elusiveness of the divine, others suspect that prayer is a merely psychological operation; something that may be useful, but is neither true nor necessary: and one could even be a practitioner without being a believer. And so it goes on, many explanations.

Those who want to pray must remember that faith is not easy, and sometimes it moves forward in almost total darkness, without points of reference.

However, the worst enemies of prayer are found within us. The Catechism describes them thus: “Discouragement during periods of dryness; sadness that, because we have ‘great possessions’, we have not given all to the Lord; disappointment over not being heard according to our own will; wounded pride, stiffened by the indignity that is ours as sinners; our resistance to the idea that prayer is a free and unmerited gift” (2728). This is clearly a summary that could be extended.

What should be done in time of temptation, when everything seems to waver? If we look at the history of spirituality, it is immediately seen that the masters of the soul were very clear about the situation we have described. To overcome it, each of them offered some type of contribution: a word of wisdom, or a suggestion for dealing moments fraught with difficulty. It is not a question of elaborate theories, of preconceived theories, no, but of advice born of experience, which shows the importance of resisting and persevering in prayer.

It would be interesting to review at least some of these pieces of advice, because each one deserves to be explored further. For example, the Spiritual Exercises of St. Ignatius of Loyola is a short book of great wisdom that teaches how to put one’s life in order. It makes us understand that the Christian vocation is militancy, it is the decision to stand beneath the standard of Jesus Christ and not under that of the devil, trying to do good even when it becomes difficult.

Prayer works miracles, because prayer goes directly to the heart of the tenderness of God, who cares for us like a father.

In times of trial, it is good to remember that we are not alone, that someone is watching over us and protecting us. St. Anthony the Abbot, the founder of Christian monasticism, also faced terrible times in Egypt, when prayer became a difficult struggle. His biographer, St. Athanasius, Bishop of Alexandria, recounts one of the worst episodes in the life of the hermit saint when he was about the age of thirty-five, a time of middle age that for many people involves a crisis. Anthony was disturbed by the ordeal, but resisted. When he finally became serene again, he turned to his Lord with an almost reproachful tone: “But Lord, where were you? Why did you not come immediately to put an end to my suffering?” And Jesus answered: “Anthony, I was there. But I was waiting to see you fight” (Life of Anthony, 10). Fighting in prayer. And very often, prayer is combat.

I am reminded of something I experienced close up, when I was in the other diocese. There was a married couple with a daughter aged nine, with an illness that the doctors were unable to diagnose. And in the end, in hospital, the doctor said to the mother, “Madam, call your husband”. And the husband was at work; they were labourers, they worked every day. And he said to the father, “The child will not survive the night. There is nothing we can do to stop this infection.” Perhaps that man did not attend Mass every Sunday, but he had great faith. He left, weeping; he left his wife there with the child in the hospital, he took the train and he travelled seventy kilometres towards the Basilica of Our Lady of Luján, Patroness of Argentina. And there – the Basilica was already closed, it was almost ten o’clock at night, in the evening – he clung to the grates of the Basilica and spent all night praying to Our Lady, fighting for his daughter’s health.

At the end of our lives, looking back, we too will be able to say: “I thought I was alone, but no, I was not: Jesus was with me.”

This is not a figment of the imagination: I saw him! I saw him myself. That man there, fighting. At the end, at six o’clock in the morning, the Church opened, he entered to salute Our Lady, and returned home. And he thought: “She has left us. No, Our Lady cannot do this to me”. Then he went to see [his wife], and she was smiling, saying: “I don’t know what happened. The doctors said that something changed, and now she is cured.” That man, fighting with prayer, received the grace of Our Lady. Our Lady listened to him. And I saw this: prayer works miracles, because prayer goes directly to the heart of the tenderness of God, who cares for us like a father. And when He does not grant us a grace, He will grant us another which in time we will see. But always, combat in prayer to ask for grace. Yes, at times we ask for grace we are not in need of, but we ask for it without truly wanting it, without fighting… We do not ask for serious things in this way. Prayer is combat, and the Lord is always with us.

If in a moment of blindness we cannot see His presence, we will in the future. We will also end up repeating the same sentence that the patriarch Jacob said one day: “Surely the Lord is in this place; and I did not know it” (Gen 28:16). At the end of our lives, looking back, we too will be able to say: “I thought I was alone, but no, I was not: Jesus was with me.” We will all be able to say this. Thank you.

[Read this next: Pope Francis explains prayer and the communion of saints]