Is there a ‘crisis’ on the U.S.-Mexico border? It’s a tough question to answer. 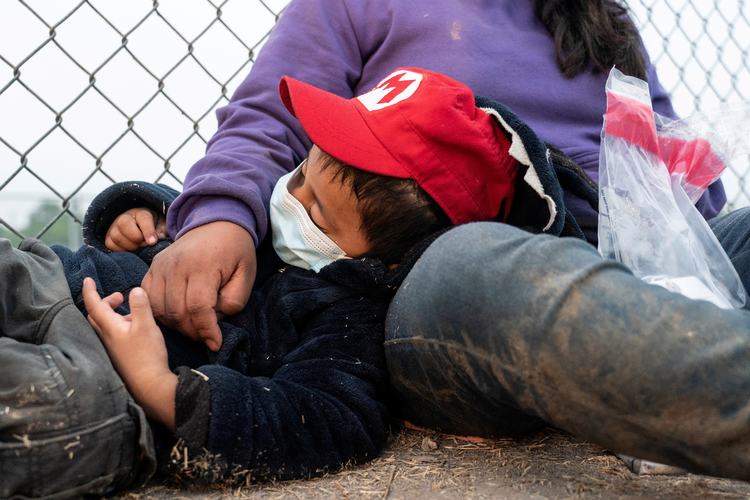 After crossing the Rio Grande from Mexico into the United States to seek asylum, a 4-year-old migrant child sleeps on the ground by his mother while they wait to be transported by Border Patrol in La Joya, Texas, April 8, 2021. (CNS photo/Go Nakamura, Reuters)

An influx of migrants and unaccompanied minors at the U.S.-Mexico border is straining the government’s capacity to process and house asylum seekers and testing the Biden administration’s immigration policy. On America’s Behind the Story, senior editor J.D. Long-García spoke with Dylan Corbett, the executive director of the Hope Border Institute—a grass-roots organization guided by the tenets of Catholic social teaching—to learn about the reality of the situation at the southern border, the politicization of immigration and the role of the Catholic Church in addressing the migrant crisis.

The following transcript has been edited for style and length.

Is there a crisis on the U.S.-Mexico border?

Oftentimes when people talk about a crisis at the border, they think about uncontrolled numbers of people. If you just look at arrivals at the U.S.-Mexico border in the first quarter of 2021, there is not a crisis. There are increasing numbers, and we have certainly seen a significant rise in the amount of children. But these are not unprecedented numbers. These are certainly not unmanageable numbers. There are peaks and valleys in terms of arrivals.

We saw a significant increase in the amount of people coming in 2014, then again in 2016, again in 2019. And now in 2021, we are seeing an uptick. And those different years have been under different administrations, both Democrat and Republican. So, it is hard to speak of a crisis in terms of the numbers.

If you are seeking refuge and asylum—protection from persecution or extreme violence in your home country—and you come to the U.S.-Mexico border right now, there is a good chance that you will be expelled; that you will not be offered even an opportunity to make an asylum claim. That is a crisis for that individual. That is a crisis for that family. It is a question of perspective. Whose perspective do we adopt when we ask questions like that?

If you come to the U.S.-Mexico border right now, there is a good chance that you will be expelled. That is a crisis for that family.

You are there in El Paso, Tex., so you have that firsthand experience of what is going on. What have you witnessed? What can you tell us about the people who are coming and the stories they are sharing with you?

Right now, though, there are some peculiarities to immigration at the border. Certainly, this is also a corridor for migration of unaccompanied youth and minors. We are seeing an increase in that, and it is very complicated. We have also seen the people who were placed in Remain in Mexico. There were about 65,000 people in total returned to Mexico under that policy. Those folks are being given an opportunity to make their asylum claims from the safety of the United States, which is the ordinary process for an asylum seeker. There has also been a real rise in single adults who are crossing the border, and we have not seen that for some time.

Now, at this part of the border, virtually everybody who comes—except for those who were placed in Remain in Mexico—is being returned [to Mexico]. Folks who are trying to come over, even if they are asylum seekers, are being forcibly returned under a pandemic-related order called Title 42, without hearing their claims, without ensuring due process.

I understand the complexity that you are describing, in terms of the different factors that are pushing migrants to make sometimes very desperate choices. I think for the common person, there is a correlation, maybe not a causality, with the Biden administration. I have seen photos of people on the border with Biden shirts. Are you hearing that from migrants? Are they more hopeful about their chances given the new administration?

Because the church has so much experience in this domain, there is an opportunity to partner with the Biden administration on addressing root causes.

There have been a number of things that the Biden Administration has done, from changing the narrative, changing the tone on how we talk about immigration and then taking some real policy steps. So, there is an expectation that Biden would have more humanitarian policies at the border. In practice, however, that has not happened.

That is interesting to hear, that difference between possibly perception and action thus far. I want to ask you about the unaccompanied minors and the situation that they are in right now. The media has not been allowed to enter a lot of these detention centers. Certainly, as a person in the media, I would want to respect the dignity of those children. But at the same time, that is a measure of accountability. Have you all been able to go in there? And if so, what have you seen?

Because of the pandemic, and because the Trump administration left the infrastructure abandoned at the border—they were expelling so many people under Title 42 and then began to return child minors—there was a lack of adequate personnel and lack of adequate infrastructure. So the Biden administration is trying to recover from that. Normally children are supposed to be in the custody of border enforcement only 72 hours and then transferred. Now, that whole system has been backed up by the lack of infrastructure and by the pandemic. There are backlogs. Children are spending more time in the custody of border enforcement agencies. Not 72 hours but days and days and days and days.

That is a red flag because border enforcement agencies do not have a good track record when sheltering people for significant amounts of time. The facilities are awful. The agents are simply not trained. There are not qualified staff to ensure child protection, health, safety, etc. Under the Trump administration, we saw more children die than had died in the past decade or more. We saw more adults die. The Biden administration is taking good steps to open up additional facilities here in Texas, California and other parts of the country, so we can address the bottlenecks. But they were a little flat-footed, frankly. The increase in children was going on for some months; they could have predicted this.

All the border enforcement agencies are really trained and funded to do—their DNA—is simply to detain and deport.

Money has a real pernicious influence on this whole reality of human migration. South of the border, we are talking about trafficking, smuggling. North of the border, there is also the reality of money influencing how we deal with immigrants. We have seen human rights abuses in the care of unaccompanied minors at the border. And oftentimes, those come from organizations that are profit-based.

When there is a profit motive, you introduce a real, terrible dynamic. There have been organizations reducing services, reducing the standard and quality of care. There have been patterns and practices of these organizations keeping children for longer than they need to be kept, and we know that there are psychosocial consequences of children being kept in prison-like facilities.

There is a strong profit motive in immigrant detention. Many of the detention centers are managed and run by for-profit corporations, which have an interest in detaining more and more migrants. So there are evil effects, we would say in the Catholic moral tradition, when you introduce the profit motive into detaining human beings north of the border.

South of the border, money can also have bad consequences, in terms of smuggling. But whenever we have tried to limit migration at the border, either by criminalizing the act of migration or [closing] our borders, people find a way around that. For those guides or smugglers or coyotes, there is a profit motive to try to find ways around that system. The only way that we are going to finally address human smuggling is to make sure that there are legal pathways for people to enter the United States.

There are evil effects when you introduce the profit motive into detaining human beings north of the border.

For the most recent story that I wrote about immigration, you talked about the current situation as an opportunity for the church. Can you share more of what that vision would be for the church to be more participatory in responding to this situation?

The church has a lot of practical experience in welcoming the stranger—in welcoming Christ, who comes to us in the migrant. And the church has a lot of social capital. There is a major opportunity for the church to speak a different narrative, to lift up the reality that people on the move do not present a threat or something to be afraid of but a challenge to human solidarity. They remind us of our interconnectedness.

I think that that is what we have seen in the pandemic: that we are all related. That unless we focus on the least privileged, on the most vulnerable, we are not going to get through crises like the pandemic together. We are not going to address things like human migration in the Americas unless we address it together. The church has a significant role to play in changing the narrative.

It is a major opportunity for the church to spread the good news of the Gospel but also to make a positive contribution to receiving people on the move at the border.