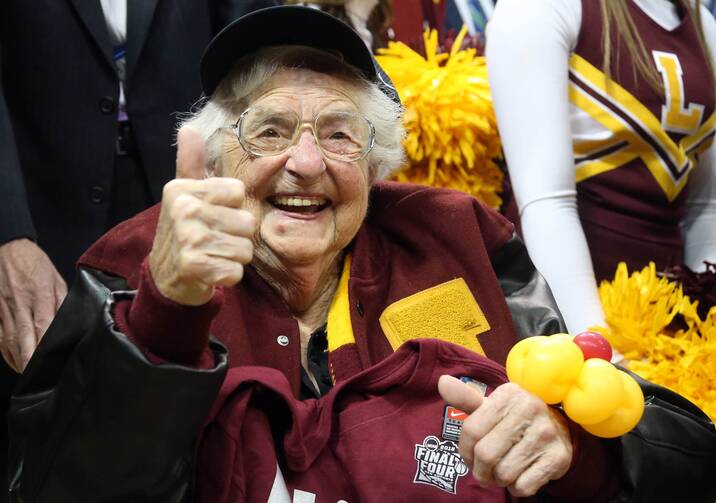 Sister Jean Dolores Schmidt, longtime chaplain of the Loyola University Chicago men's basketball team and campus icon, gives a thumbs up after the team defeated the Nevada Wolf Pack in the semifinals of the South regional of the 2018 NCAA Tournament March in Atlanta.(CNS photo/Brett Davis-USA TODAY Sports via Reuters)

A year after it was canceled because of the COVID-19 pandemic, the NCAA basketball tournament is back. And one of the sport’s most beloved fans will have a shot at witnessing any buzzer-beaters by her favorite team in person, too.

Sister Jean Dolores Schmidt became the focus of a media frenzy three years ago when she accompanied the Ramblers of Loyola University Chicago on their underdog run to the Final Four at the 2018 men’s tournament.

Sister Jean, a member of the Sisters of the Charity of Blessed Virgin Mary, has served as team chaplain since 1994. Her pious courtside presence quickly became one of the feel-good stories of March Madness that year.

In a March 13 interview with the Chicago Tribune, Sister Jean, 101, said she had asked university administrators for their blessing to attend the tournament, which instead of bouncing around the country will be confined to the Indianapolis area to minimize potential spread of the coronavirus.

Approval came March 16, as the Tribune reported that Sister Jean, who has been fully vaccinated, will travel to Indianapolis in time to watch the eighth-seeded Ramblers take on No. 9 seed Georgia Tech March 19.

COVID-19 precautions are limiting the number of fans into the Indianapolis basketball bubble, and teams are restricted to 34 people in their travel parties. All members of a party must have seven consecutive days of negative COVID-19 tests before traveling to the tournament and once there are required to take daily rapid tests.

“I have not lost hope in going,” she previously told the Chicago newspaper. “I want to go so badly.”

Sister Jean, in making her pitch to join the team, said she turned to Luke’s Gospel and the parable of the persistent widow, who did not grow weary in asking a judge for a just decision.

Like many women religious during the pandemic, she has been in lockdown for much of the past year and has kept up with her campus ministry work virtually. Only recently was she able to meet with two other sisters in person. Like many sports fans, she has been unable to attend Ramblers games in person.

She turned to Luke’s Gospel and the parable of the persistent widow, who did not grow weary in asking a judge for a just decision.

Still, Sister Jean has stayed in contact with the players and coach Porter Moser, sending them emails after games and even offering the team her signature pregame prayers and pep talks, including during the Ramblers’ run earlier in March to the Missouri Valley Conference championship.

In a column for Yahoo Sports, Dan Wetzel made the case that the NCAA should do everything in its power to make sure Sister Jean is safely in attendance at Loyola’s first tournament game, even if NCAA President Mark Emmert has to drive her there himself.

Other Catholic angles abound at the 2021 men’s tournament, tipping off March 18.

That begins with Gonzaga University, making its 21st consecutive tournament appearance with perhaps its best chance yet to cut down the championship net.

The Bulldogs, with a record of 26-0, are the No. 1 overall seed, and many basketball insiders see 2021 as their year. Should coach Mark Few and his team capture that elusive title, Gonzaga would be the first men’s champion with a perfect record since the Indiana Hoosiers won the championship in 1976.

Eight Catholic schools made the men’s tournament, and three punched their March Madness tickets to the women’s tournament. Two universities will compete in both tournaments.

The Catholic schools in the women’s tournament, announced March 15, are Gonzaga (No. 5 seed), Marquette University (10) and Mount St. Mary’s University (15). Marist College (15), which was founded by the Marist brothers but is now nonsectarian, also made the bracket. The tournament will be held in San Antonio.

On the men’s side, joining Gonzaga and Loyola Chicago in Indianapolis are Creighton University (No. 5 seed), St. Bonaventure University (9), Georgetown University (12), Villanova University (5), Iona College (15) and Mount St. Mary’s, which will try to become the No. 16 seed in the East region on March 18 against Texas Southern University.

[For more on Sister Jean, read: How Loyola Chicago’s Sister Jean prays—on and off the court]

Brian Roewe - Catholic News Service
Show Comments ()
Join the conversation: Login or create an account
Before you can comment, you need to update your profile to include your first and last name, as required in our comments policy. Then reload this page and you'll be set up for commenting. Update your profile