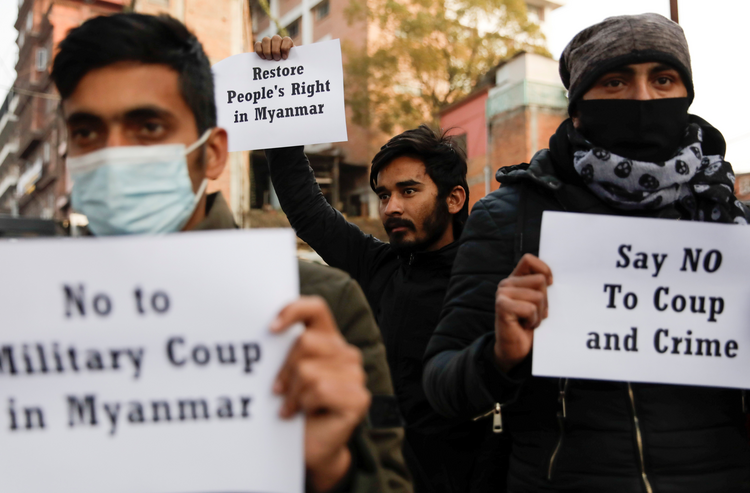 Aware that a coup appeared to be imminent, Cardinal Charles Maung Bo, the archbishop of Yangon, speaking on Jan. 25 in the name of the “Religions for Peace in Myanmar,” an inter-religious body, and as president of the Federation of Asian Bishops Conferences, issued “an urgent, fraternal appeal for peace and reconciliation” to the “elected leaders in the new Government, to responsible persons in the military, to all civil servants, to ethnic leaders both political and military, and to all people of good will.”

Aware that a coup appeared to be imminent, Cardinal Charles Maung Bo, the archbishop of Yangon, speaking on Jan. 25 issued “an urgent, fraternal appeal for peace and reconciliation.”

He addressed the message especially to Suu Kyi, the de-facto leader since 2015, and appealed for a negotiated not a military solution, and he pleaded with “all civilian and military leaders” to “lay aside the futile pursuit of military solutions” to the country’s many problems. But the military, which has close links to China, was already moving in the opposite direction; it alleged electoral fraud in the Nov. 8 election, notwithstanding strong evidence that it was free and fair.

Aware that she was likely to be arrested again—after already spending 15 years in detention or house arrest (1989-2010)—Suu Kyi, the daughter of the country’s independence hero, wrote a letter in which she accused the military of returning the country to a dictatorship. According to the BBC, she called on her followers “to not accept this” and to “protest the coup,” but that is difficult now given the military firepower on the streets and with social communications greatly weakened overnight, and in some places paralyzed.

Today, at dawn, the military carried out the arrests and declared a one-year state of emergency just hours before the parliament was due to convene to confirm the landslide victory of Suu Kyi and her National League for Democracy that has governed this country 2015.

The military had already governed the country with an iron fist for almost 60 years (1962-2011) until international and internal pressure caused them to open the path to “a disciplined democracy” just 10 years ago. In reality, they never completely gave up power and had a constitution drafted and approved in 2008 that gave them 25 percent of the seats in parliament that effectively blocked any substantial changes to the constitution, and also retained the key ministries of defense, homeland security and border control.

Ms. Suu Kyi, a Nobel Peace Laureate in 1991 for her defense of human rights, had sought in various ways to keep democracy alive and avoid the military return to power. She even went to the extent of defending the military at the International Court of Justice in the Hague over the repression of the Rohingyas, a stance that caused her to lose much credibility in the West. But she remained highly popular at home as evidenced by her party’s landslide victory that caused great embarrassment to the military, who perhaps viewed it as a growing threat to their power.

The military coup has been condemned by many countries including the United States, the European Union and the United Kingdom. They have called for the immediate release of those arrested, and respect for the result of the election. China urged all sides “to resolve differences.”

Pope Francis, visited the country in November 2015, at the invitation of Suu Kyi (with whom he enjoys a good relation) and of Cardinal Bo and the local bishops, in the hope that he could in some way contribute to the strengthening of democracy in this land where religion plays an important role in the life of the people, 87.9 percent of whom are Buddhist, 6.2 percent Christian (including 750,000 Catholics), 4.3 percent Muslim, and the rest are Hindu and animist.

It is likely that the pope will comment on this grave attack on democracy in Myanmar when he addresses the ambassadors from 183 countries that have diplomatic relations with the Holy See, next Monday, Feb. 8.