Pope Francis prays for peace in Myanmar, calling on its leaders to work for the common good 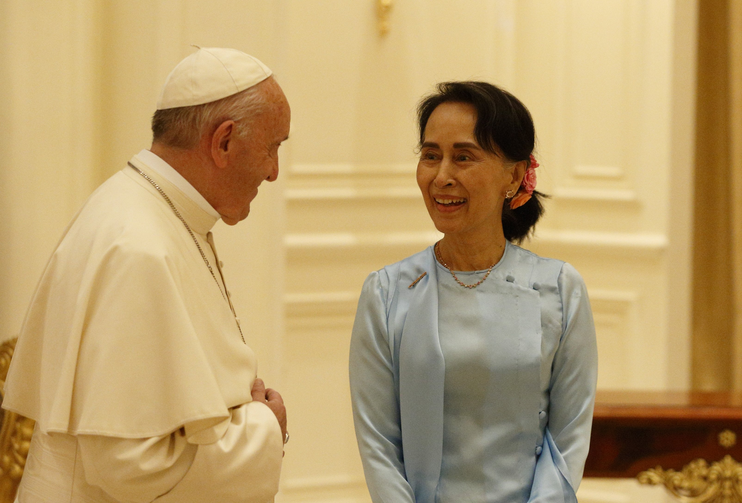 Pope Francis today expressed his “live concern” at the recent developments in Myanmar where the military has seized power, overthrowing the results of the recent election. He called on “those who have responsibility” to “work for the common good, by promoting social justice, national stability” to ensure “a harmonious democratic living together.”

Speaking after reciting the Angelus from the papal study of the apostolic palace, Pope Francis said he was “following the developments” in this south-east Asian state of almost 55 million people that he visited in November 2017.

“In this delicate moment,” he said, “I wish to assure my spiritual closeness, prayer and solidarity to the people of Myanmar.”

“I pray,” the pope continued, “that those who have political responsibility show sincere willingness to serve the common good, promoting social justice and national stability” in view of a harmonious and democratic cohabitation.

Pope Francis today expressed his “live concern” at the recent developments in Myanmar where the military has seized power, overthrowing the results of the recent election.

He asked the faithful gathered in St. Peter’s Square for the first time since before Christmas and those connected by social media, to join him in prayer for “a nation that I carry in my heart with much affection, ever since my apostolic visit there in 2017.”

Francis made that visit with the main aim of strengthening democracy in the country and giving a helping hand to its de-facto democratically elected leader and Nobel Peace laureate, Aung San Suu Kyi, with whom he has a very good relationship.

Sources in Rome say Pope Francis learned with deep concern about the upending of democracy by the military on the morning of Feb. 1, just as the parliament was due to convene in Naypyidaw, the country’s third-largest city that has been its administrative capital since 2005 and is the seat of government and of the presidency.

It was expected in Rome that Pope Francis would have addressed this attack against democracy tomorrow morning, Feb. 8, when he greets the ambassadors from 183 countries (including Myanmar) that have diplomatic relations with the Holy See

“In this delicate moment,” the pope said, “I wish to assure my spiritual closeness, prayer and solidarity to the people of Myanmar.”

While he may still speak about the situation in Myanmar tomorrow, sources say Pope Francis nevertheless decided to speak today for two main reasons. First, he knew that the Catholic bishops of Myanmar, led by their president Cardinal Charles Maung Bo, had called on the Catholics to hold “a day of prayer, fasting, and adoration” this Sunday, Feb. 7, in churches and homes throughout the country for peace in this land that borders China, India, Bangladesh, Thailand and Laos. He spoke as a way of giving support to the bishops initiative and to keep international attention on this situation.

Second, he is concerned at what could happen in the country now that the military is faced with a growing nonviolent resistance that has begun to gain momentum in the country, including in Yangon (the largest city) and Mandalay. The BBC reports that Myanmar is witnessing the largest protests since the Saffron Revolution in 2007, with protestors calling for the release of Aung San Suu Kyi and a return to democracy. Although they have arrested around 160 people, the military has so far not resorted to the brute force of past decades. Instead, they sought to contain the protests by blocking the internet and social media today, but that did not stop tens of thousands coming out on the streets in protests.

Around the time the pope spoke, the military restored the internet and Cardinal Bo tweeted from Yangon that young people are in the streets. But clearly the peace is fragile, and both the pope and the cardinal are hoping that a way can be found for the military to backdown, not in a year’s time as they have promised but much sooner. Time will tell whether they will do so.