The contradictions of Harry and Meghan’s Oprah interview 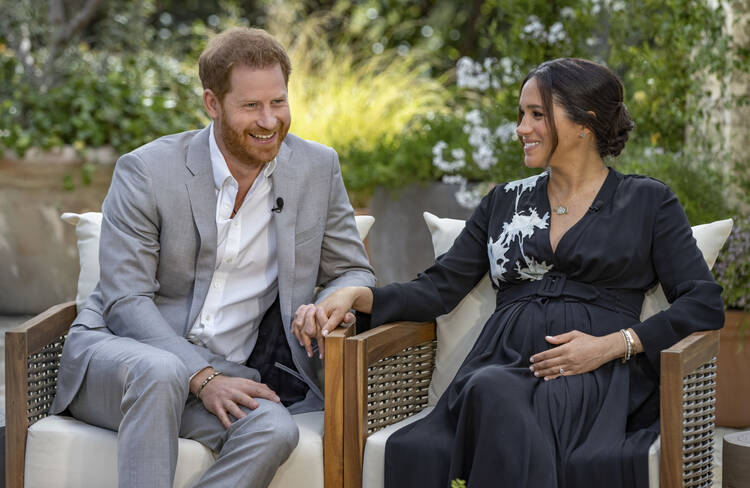 This image provided by Harpo Productions shows Prince Harry, left, and Meghan, Duchess of Sussex, speaking about expecting their second child during an interview with Oprah Winfrey. (Joe Pugliese/Harpo Productions via AP)

In the summer of 1999, after a hot and stuffy train trip from London, I boarded a hovercraft and crossed the Solent, the strait that separates Great Britain from the Isle of Wight, the largest and second-most populous island off the coast of England. From the dock in the isle’s small town, I walked a half-mile to the Medina River, which I crossed via one of the world’s few remaining chain ferries. I then grabbed a cab for a two-mile ride to a visitors’ station, where I climbed into a horse-drawn cart and clip-clopped up a long, winding drive. After the last bend, Osborne House, in all of its strange and glorious grandeur, came fully into view.

A mansion in the style of an Italian palazzo was an odd choice for a home in what was, in the mid-19th century, a rather modest fishing and farming village. Yet if the house seemed out of place, much more so did its residents, which included the doughty little woman who was then reigning over an empire on which the sun never set. Osborne House was the summer home and rural retreat of Queen Victoria and Prince Albert, who designed it themselves. It was here, for the most part, that they raised their nine children.

I realized almost at once why Osborne was Victoria’s favorite home, and it has a lot to do with the great lengths I had taken to get there. In the 19th century, Osborne House would have been almost impossible to reach for an average person—not to mention the average Fleet Street journalist. For that reason, Victoria could be most comfortably herself on the Isle of Wight. The elegant yet homey rooms still convey that sense of freedom that seemed to elude her elsewhere. While the royal palaces in London are designed mainly as stages for great state theatricals, Osborne House, for all of its majesty, is basically a family home, and until I visited that day, I had not really thought of the royal family as, well, a family.

More than 17 million people watched as Harry and Meghan dropped bombshell after bombshell, including serious yet vague charges of racism among the royal family and their entourage.

So Osborne House was much on my mind as I watched Oprah Winfrey’s interview with Queen Victoria’s great-great-great-great grandson, Prince Harry, and his wife, Meghan Markle. More than 17 million people watched as Harry and Meghan dropped bombshell after bombshell, including serious yet vague charges of racism among the royal family and their entourage. Harry said, in fact, that it was racism in the British press that drove him to move Meghan and their young son to the United States. He also faulted the family and the palace guard that supports them for failing to protect his wife, saying that they were left defenseless in the face of a tabloid onslaught.

The interview also yielded new questions and revealed some seeming contradictions. There are the simultaneous claims, for example, that the couple has been tortured by their press coverage and also that they don’t read or watch their press coverage. The couple further claimed that they had been silenced during their brief royal life together and that this is why they are now speaking out. But they are speaking out about people—the royal family—whom Meghan and Harry claim have themselves been silenced. Just how the people to whom the couple are speaking can be expected to respond in light of that fact is murky. Lastly, while Harry and Meghan’s stated intention to repair their relationships with the family seems sincere, this interview seemed like a strange way to go about it. How is the excruciatingly public airing of these charges and grievances not widening the breach?

But the most shocking and painful part of the interview was the duchess’s account of her struggle with anxiety and depression and how these drove her to contemplate suicide. One can only imagine the sense of hopelessness that must have driven her to such depths. Our hearts quite rightly go out to her, and we can thank God that they have found some peace and a place to call home.

While Harry and Meghan’s stated intention to repair their relationships with the family seems sincere, this interview seemed like a strange way to go about it.

What the dramatic interview means for the future of the British monarchy is now topic number one in the commentariats on both sides of the Atlantic. But talk of this as the force that will destroy the institution really misses the mark. The British monarchy isn’t going anywhere. As difficult as it is to imagine in the press of the present news cycle, scandal and drama in the royal family is nothing new. There was Princess Diana’s agonizing Panorama interview, as well as other televised tell-alls by Prince Charles and Sarah, Duchess of York, in the 1990s. But while the medium has changed, the content is familiar to students of history.

Meghan Markle’s life is exceptional—but her suffering isn’t. We should honor her bravery in sharing it.
Maggi Van Dorn

At Osborne House, Queen Victoria spent many sleepless nights worrying about press intrusions and public charges of indecency and adultery leveled against members of her family. Her son, the future Edward VII, was very nearly named as an accomplice in an adultery and divorce trial that was the talk of Britain. Her grandson and heir, Prince Albert Victor, was implicated in a scandal involving a homosexual brothel in London and was even rumored to be the notorious Jack the Ripper. There was only a scintilla of truth in the former charge and none in the latter. Still, the speculation only stopped when Albert Victor died prematurely at the age of 28.

History suggests that the monarchy is so deeply entrenched in the constitution and culture of Britain that it will almost certainly weather this crisis. The lasting damage from this sad affair will not be to the queen and the British monarchy, but to Elizabeth Windsor and her family. Can the obviously strained and seemingly severed ties among these brothers, fathers, sons and daughters be repaired? One hopes so. Here, too, I would like to think that the British people will be patient, even sympathetic. After all, everyone has a family that involves some painful history, and few of us would want to tell Oprah and the whole world about it.

Everyone has a family that involves some painful history, and few of us would want to tell Oprah and the whole world about it.

At the moment, of course, reconciliation appears pretty unlikely unless the very human people involved are able to summon the courage to forgive, to extend their mercy, to seek to understand one another. Let us pray that God gives them the grace they will surely need to do that difficult work. For apart from the consolation that reconciliation would bring to these people who purportedly love one another, imagine how powerful a witness it would be—a living model of a family who, through their love, tenderness and mercy, were able to overcome their divisions—to transform their wounded hearts into hearts of wounded healers.

“I long for our cheerful and un-palace-like rooms at Osborne,” Queen Victoria wrote to her daughter during one of the queen’s long stays at Windsor Castle. For her family, Victoria wrote, “It is impossible to imagine a prettier spot.”

Correction: A previous version of this article stated more than seven million people watched the interview. It was viewed by more than 17 million.