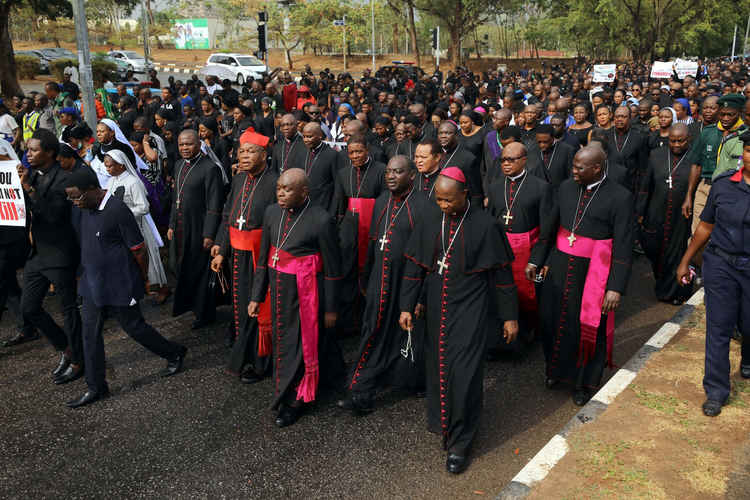 The Rev. John Gbakaan was abducted and held for ransom on Jan. 15 near Tufa village in the Middle Belt region of Nigeria. He had been traveling that evening with his brother to visit their mother in Benue state, north-central Nigeria.

The pastor of St. Anthony Catholic Church was allegedly ambushed by armed gunmen and held for an initial ransom of 30 million Nigerian naira, about $80,000. His abductors quickly dropped the ransom to 5 million naira, about $15,000, but Father Gbakaan was found dead the next day with machete cuts all over his body. No arrests have been made in connection with the priest’s murder. The whereabouts or condition of his brother are also unclear. He has not been seen since he left on the trip.

In November last year, the Rev. Matthew Dajo, a priest of the Archdiocese of Abuja—Nigeria’s capital city about 100 miles from Father Gbakaan’s diocese—was also seized by armed men and held hostage for 10 days. At least 20 priests in Nigeria have been abducted over the past five years.

In 2018, armed herdsmen killed two priests and 17 parishioners during morning Mass at St. Ignatius Quasi parish in a rural community in Benue state, provoking a national uproar and attracting international attention to the violence experienced by the Nigerian Catholic community. The attackers also destroyed farmlands and razed houses in the impoverished farming community.

Thousands of Catholic faithful and concerned citizens flooded Nigeria’s streets in protest of the ongoing violence and growing insecurity.

Following the attacks, thousands of Catholic faithful and concerned citizens flooded Nigeria’s streets in protest of the ongoing violence and growing insecurity. Some Catholic bishops joined the march and held a prayer rally for the victims and for peace in the country.

“We joined this [protest] because we wanted to show how bad we felt about the killings and to also show our displeasure towards the government’s inability to protect us,” Samson Otuko told America this month. “Even now we still live in fear because the herders are still occupying our forests and farmland.”

“The attacks on priests by bandits or armed men on face value may simply be a manifestation of growing criminality,” said the Rev. Evaristus Bassey, the former executive director of Caritas Nigeria. “Priests are seen as part of the privileged group, and so the attacks may come as [an expression of] a form of anti-clericalism.

“Some of us may not have helped matters with our level of ostentation,” said Father Bassey, who serves as a parish priest in southern Nigeria and heads the Justice Development and Peace Commission in the Archdiocese of Calabar. “We drive fine cars and appear quite content, so we stand out and become a target.” But, he added, “truly, it is a wrong perception. Many of us are quite poor and the only thing we may possess is a fine car. We cannot also dismiss other considerations.”

The attacks are not limited to ordained clergy and those training for the priesthood have also been targeted.

The attacks are not limited to ordained clergy and those training for the priesthood have also been targeted. In January 2020, four seminarians were attacked and abducted from Good Shepherd Seminary in northern Nigeria. Michael Nnadi, an 18-year-old seminarian was killed while the three others were released some weeks later.

Pope Francis has invited the global Catholic community to pray over the insecurity in the country. “Today, I would like to pray in particular for the population of the northern region of Nigeria, victims of violence and terrorist attacks,” he said in his address at St. Peter’s Square in the Vatican following the Angelus prayer on Aug. 8, 2020.

The growing attacks on priests and their ministries has left many living in fear. “The security situation is not just bad; it is extremely so,” said Father Bassey. “You want to hurry to get back home; you don’t want to be in a lonely place; you can’t step out and take a stroll.

“The truth is that I have had to do drastic adjustments to my lifestyle and by taking precautionary measures,” he said. “I have colleagues and parishioners who have been kidnapped and the stories I hear are not pleasant at all. I pray myself out of such circumstances because I am not sure how I would react.”

Pope Francis has invited the global Catholic community to pray over the insecurity in the country.

He suggested that three factors were at play in contemporary Nigeria, contributing to growing insecurity for priests: “growing criminality nurtured by a get-quick-rich mindset; anti-clericalism based on a loss of the sense of the sacred; and terrorist religious considerations.”

In September 2019, hundreds of priests from the diocese of Enugu, a city in Nigeria’s southeast region marched in a protest against the frequent abduction and killing of priests. Their demonstration followed the killing of the Rev. Paul Offu, a priest of the diocese, who had been returning to his parish when he was ambushed by armed men suspected to be cattle herders from the Fulani ethnic group.

In the wake of the killings and the ensuing public outrage, the state government said it planned to recruit about 1,700 forest guards to carry out regular patrols in the forests, where armed militia herdsmen were known to hide, to protect local farmers and vulnerable communities.

“The Nigerian state has become so weak that non-state militias have arisen—the Fulani perceived as an invading force and others perceived as a defending force,” said Father Bassey. “It leaves those of us from minority groups quite vulnerable because we cannot defend ourselves, and the government is either incapable or deliberately cannot defend us. The militias know the weakness of the state and so attack at will, knowing there isn’t really a restraining force.”

The Nigerian government has been unable to provide adequate security for its people and there is growing insecurity. “Government may be doing all in its power,” he said, “but the perception among citizens is that the government is actually [aiding] the terrorists through misguided policies.”

The Nigerian government has been unable to provide adequate security for its people and there is growing insecurity.

"You give special treatment to terrorists, more terrorists get bred,” said Father Bassey “You give ransom to bandits; they use the money to buy more weapons and so the vicious cycle continues,” he explained. “I think the government has not helped the situation by not doing much to dislodge the perception that it is out to promote the agenda of an ethnic group.”

President Muhammadu Buhari, who is from the Fulani ethnic group, has been accused of protecting his kinsmen and not doing more to condemn their crimes. In a situation where the attackers appear to be protected by authorities and escape arrest, said Father Bassey, among the people there is a “resentment that has gradually built up.”

In December 2015, Mr. Buhari claimed that the Nigerian government had “technically defeated” Boko Haram, the Islamic militant terrorist group, meeting a promise he made to win the election in March that year.

However, it would appear that this has not happened. While the military has regained major territories occupied by the terrorists, Boko Haram continues to regularly carry out attacks in the northeast, targeting both Muslim and Christian communities.

On Christmas eve last year, Boko Haram insurgents stormed Pemi, a Christian town in the northeast, killing seven people and abducting a priest.In the early years of its violent campaign to impose Islamic law on the country, the terrorist group earned global notoriety for carrying out targeted attacks on Christian communities, bombing churches, abducting, and killing priests and consecrated women and men.

In a scathing homily on Christmas Day last year, the Most Rev. Matthew Kukah of the Diocese of Sokoto deplored the “endless bloodletting,

In a scathing homily on Christmas Day last year, the Most Rev. Matthew Kukah of the Diocese of Sokoto deplored the “endless bloodletting, a collapsing economy, social anomie, domestic and community violence, kidnappings, armed robberies” afflicting Nigeria. The bishop criticized especially the country’s Muslim president, accusing him of “nepotism.”

The Muslim Solidarity Forum, a group of Islamic organizations, condemned Bishop Kukah for attributing terrorism and growing attacks by bandits and herders to Islam and for what they understood to be the bishop’s call for a military coup over growing insecurity, maladministration and nepotism.

The possibility that militant Islamic movements might be behind the regular attacks and killings of priests in the country cannot be dismissed. According to Father Bassey, some herdsmen seem to be working in collaboration with Boko Haram and the Islamic State in West Africa “and see it as a religious duty to kidnap and torture priests or even kill them.”

Ugochukwu Ugwoke, I.Sch., a parish priest in southwestern Nigeria, confirmed Father Bassey’s intuition. “Of course,” he said, “the cattle herders are so much involved in the acts.”

“I will not be surprised if more priests become targets of attacks,” said Father Bassey, suggesting that angry members of more militant Islamic groups could commit further violent attacks on Christians, “as a means of avenging their honor,” he said, “which they seem to think has been mocked.”

@PatrickEgwu6
Provide feedback on this article
Join the conversation: Login or create an account
Before you can comment, you need to update your profile to include your first and last name, as required in our comments policy. Then reload this page and you'll be set up for commenting. Update your profile