Seminarian murdered by kidnappers in Nigeria 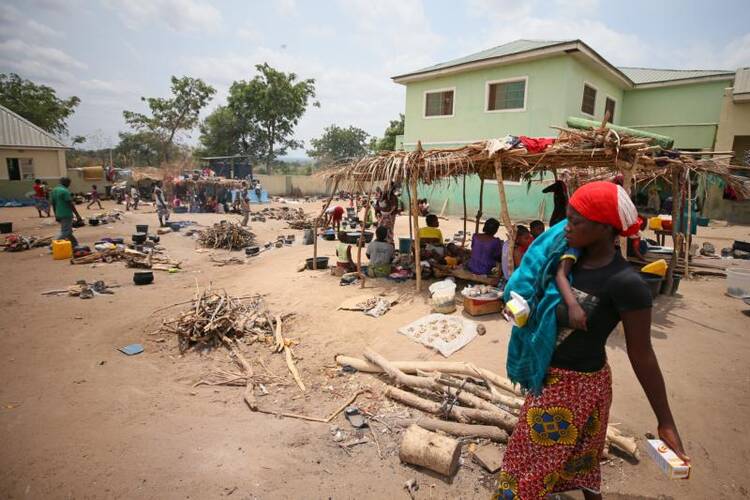 A woman carries a child through a camp in the state of Benue, Nigeria, April 11, 2018. The Catholic Diocese of Makurdi and others condemned the killings of two priests and 17 parishioners of St. Ignatius Catholic Church in the state. (CNS photo/Afolabi Sotunde, Reuters)

VATICAN CITY (CNS) -- An 18-year-old seminarian, kidnapped along with three other seminarians, was found murdered in Nigeria, according to Aid to the Church in Need.

The Catholic charity confirmed the death of Michael Nnadi, who was kidnapped with the others Jan. 8 during an attack at the Good Shepherd Seminary in Kakau, in Nigeria's Kaduna state.

"With immense sorrow, we must inform you that the last seminarian held by kidnappers, Michael, was murdered. The rector of the seminary of Kaduna identified the body in the afternoon," Aid to the Church in Need tweeted Feb. 1.

The three other seminarians -- Pius Kanwai, Peter Umenukor and Stephen Amos -- were released in late January.

Nnadi's death is the latest in a string of attacks against Christians in Nigeria, who have been targeted by terrorist groups like Boko Haram, but also by bandits seeking to extort money from the Catholic Church.

In an interview with Aid to the Church in Need Jan. 31, Archbishop Augustine Akubeze of Benin City, president of the Nigerian bishops' conference, said attacks against Christians are "due to lack of security in the entire country."

After three priests are murdered in the Philippines: ‘We will not be afraid.’
Nash Tysmans

The church, he added, lacks resources, such as video cameras in churches and seminaries, which "would be useful at least to capture some terrorists."

"Many Nigerians are asking themselves if the president lives in a parallel universe," the Nigerian archbishop said. "How can he be surprised after we have participated in numerous mass burials of Christians killed by Boko Haram?"

Thomas Heine-Geldern, executive president of Aid to the Church in Need, said the kidnapping of the seminarians, as well as targeted attacks and murders of Christians in Nigeria were a sign that the government needs to do more to ensure the safety of its citizens.

"The murders and abductions remind me of the situation in Iraq before the invasion of the forces of the so-called Islamic State," Heine-Geldern said Jan. 13. "Already at that stage, Christians were being abducted, robbed and murdered because there was no protection by the state. This must not be allowed to happen to the Christians of Nigeria. The government must act now, before it is too late."