Africa was winning the Covid-19 battle. Then came rising death rates (and waves of misinformation). 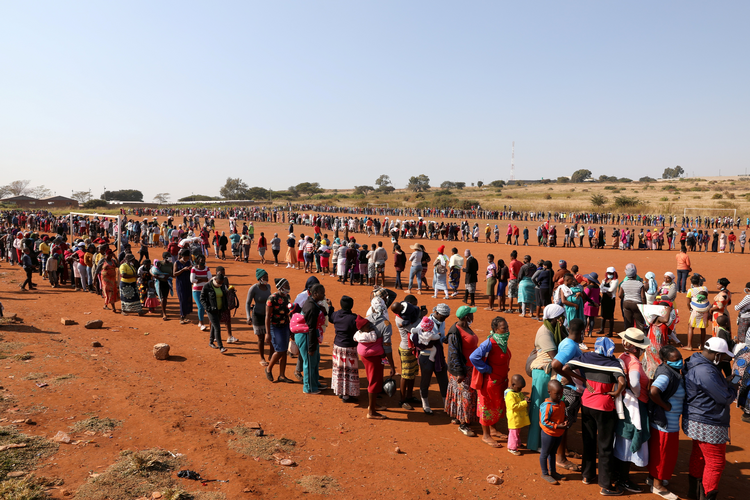 African states appeared to be faring better than many other nations during the Covid-19 crisis. Now, Africa has the highest infection-to-death ratio in the world, according to statistics released on Feb. 4 by the African Centers for Disease Control and Prevention.

The number of deaths in Africa so far, more than 95,000 people, accounts for less than 4 percent of the global total. But the 2.6 percent rate at which people are now dying from complications related to Covid-19 in Africa is almost half a percent higher than the 2.2 percent global average.

“Our case fatality rate is becoming very troubling,” said John Nkengasong, the Africa C.D.C. director, reporting at a press conference in Addis Ababa, Ethiopia, that the continent now had the highest worldwide death rate. “It used to be the reverse.”

Dr. Nkengasong worried that the number of deaths—2.2 million worldwide lost to Covid-19 since the pandemic’s outbreak in Wuhan, China, at the end of 2019—have had a dulling effect. “I would like us to continue to remember that these individuals, they are loved ones, they are sisters, mothers, brothers, uncles...to put a face to these numbers They are not just statistics.

“It would be a tragedy,” he said, “if we begin to normalize these deaths going forward.”

African states appeared to be faring better than many other nations during the Covid-19 crisis. Now, Africa has the highest infection-to-death ratio in the world, according to Africa C.D.C.

Deaths due to Covid-19 on the African continent are likely to be significantly higher than the officially reported numbers. Many of Africa’s 54 nations are debt-ridden and under-resourced. On Feb. 5, Zambian officials requested a debt restructuring after the country defaulted on payment last year citing pandemic-related strains. Last week Chad asked for the same, acknowledging it would be unable to meet debt repayments.

The most impoverished African countries do not have strong testing capacity and lack the sophisticated and integrated death-reporting systems seen in wealthier nations. “Testing is the number one tool to fight this pandemic because without testing we will be fighting blindly,” said Dr. Nkengasong in a press release issued by the Africa C.D.C. on Jan. 29 to announce a $12 million grant from The Rockefeller Foundation to expand testing and contact tracing in Africa.

Leadership lapses and the spread of erroneous information and fear about possible treatments for the disease also threaten a successful Covid-19 response in Africa. While the spread of misinformation and fake news is not limited to Africa or particularly acute there, misinformation shared by authority figures can be devastating, especially in poor, rural communities where many believe in the promises of politicians.

Misinformation shared by authority figures can be devastating, especially in poor, rural communities where many believe in the promises of politicians.

Almost nine months ago, President John Magufuli of Tanzania, for example, ordered an end to the public reporting of Covid-19 cases. He has dismissed the possibility of a national lockdown or the imposition of travel restrictions to control the pandemic.

“We Tanzanians haven’t locked ourselves in and we don’t expect to lock ourselves down,” he said in late January during a farm opening in his native region in the western part of the country. “I don’t expect to announce any lockdown because our God is living and He will continue to protect Tanzanians.”

Mr. Magufuli fired his deputy health minister and other top health officials when they failed to tow the party line. Last May, he claimed that his son had been infected with Covid-19 but was restored to full health after he “quarantined and used steam inhalation, took lemons and ginger.” The president claimed, last month, that Tanzanians should follow a similar course of treatment, using steam inhalation and herbal medicines—measures not sanctioned by the World Health Organization—to fight the disease.

In June, the Roman Catholic president praised a Sunday congregation in Dodoma, the country’s capital city, for refusing to wear masks. He said that masks had not been approved by the government and could therefore be infected with the virus. “Corona in our country has been removed by the powers of God,” he told the people as they gathered for prayer.

“I don’t expect to announce any lockdown because our God is living and He will continue to protect Tanzanians,” said Mr. Magufuli.

At a teacher’s conference in the city, days earlier, Mr. Magufuli told delegates about how he had eradicated another deadly virus. “When I came to power they said we have cases of the Zika virus and I fired the person who announced that,” he said. “Since I fired him five years ago, Tanzania has not had cases of Zika.

“Now we have corona. They said bodies will be lying on streets in Africa. But they did not know God loves Tanzania,” Mr. Magufuli said. “We prayed for three days and the coronavirus is finished.”

The president went on to assert that only four people were infected with coronavirus, even though the official count was 509 Covid-19 cases and 21 deaths. Today, that count remains the same. In late April the president froze the publication of all health data related to Covid-19.

“We are hearing today from [reliable] sources in Tanzania about the urgent and escalating Covid-19 crisis,” Charles Chilufya, S.J., told America on Feb. 3.

Brazil has an ally in the fight against Covid vaccination disinformation: The Catholic Church.
Filipe Domingues

Father Chilufya heads the Africa task force of the Vatican Covid-19 Commission,an advisory body that Pope Francis established last year to respond to the pandemic and to fight for equitable provision and distribution of health care worldwide. “It’s true that there is a perceived dearth of leadership in responding to the pandemic,” said Father Chilufya. “Many feel more could be done to save lives and ensure the crisis does not deepen.”

But so persistent is the Tanzanian president in his conviction that Covid-19 no longer presents a threat that he has rejected the Covid-19 vaccine, preventing its distribution in Tanzania. “Be firm,” he said on Jan. 27. “Vaccines are inappropriate.”

The president doubted the efficacy of vaccines and claimed that people who have been vaccinated overseas were transporting the virus back into Tanzania and being used as “guinea pigs” by vaccine manufacturers in the developed nations. “Those vaccines don’t work; they are not good,” he said at a packed rally in the capital at the end of January. “Tanzanians should be careful with these imported things.

“Vaccinations are dangerous,” the president said on Jan. 28. “If the white man was able to come up with vaccinations, then vaccinations for AIDS would have been brought.”

Mr. Magufuli has also rejected offers of vaccine donations from the West, suggesting, without justification or evidence, that they are an attempt by Western nations to steal Africa’s wealth. He instructed the Tanzanian health ministry not to accept any vaccines until they have been vetted and tested by local experts.

At a press conference on Feb. 1, Dorothy Gwajima, the Tanzanian health minister, told reporters that “the ministry has no plans to receive vaccines for Covid-19.” Dr. Gwajima, declining to wear a mask, said that while the government has no intention of delivering a vaccine to the public, the Tanzanian people should continue to use sanitizers, improve their personal hygiene and even use steam inhalation—a measure consistently dismissed by global health experts as an effective preventative against the coronavirus.

Tanzania’s Catholic bishops are worried about the misinformation being circulated by government authorities, especially in the wake of the discoveries of more virulent strains of Covid-19 in Africa. On Jan. 26, the Tanzanian Episcopal Conference issued a statement encouraging Tanzanians to take Covid-19’s risks seriously and maintain adequate personal and communal precautions against the disease.

“There is a new wave of coronavirus infections and several countries have confirmed that they are going through a difficult period in the spread of the coronavirus and the occurrence of fatalities,” the bishops said. “Our country is not an island….We must defend ourselves, take precautions and cry out to God with all our might so that this scourge will not overtake us.”

Tanzania’s bishops implored the faithful to guard themselves against disease with “all the spiritual, physical, scientific and social arms” they could employ.

Tanzania’s bishops implored the faithful to guard themselves against disease with “all the spiritual, physical, scientific and social arms” they could employ. “Let us not stop praying, maintaining social distance, washing and sanitizing our hands, taking the necessary action when we see signs of illness and avoid congestion which can be dangerous,” they said.

Father Chilufya was cheered by the bishops’ initiative. “The statement of the bishops is very important in a country where clergymen or church leaders are quite influential and listened to,” he said. “As the bishops of Tanzania have said, ‘Tanzania is not an island.’” He worries that the second wave of Covid-19 could “stall any possibility of recovery.”

The pandemic’s impact on Tanzania, especially among its poorest families, has been acute, said Father Chilufya, “imperiling the significant progress made in reducing extreme poverty in Africa and the world since the 1990s.”

The pandemic’s impact on Tanzania has been acute, said Father Chilufya, “imperiling the significant progress made in reducing extreme poverty in Africa and the world since the 1990s.”

According to Father Chilufya, who also serves as director of the Jesuit Justice and Ecology Network Africa, “both the World Bank and the [International Monetary Fund] agree that for the first time in more than 25 years, sub-Saharan Africa is experiencing a recession.”

World Bank estimates suggest, he said, that because of the impact of Covid-19 an additional 26 million people in sub-Saharan Africa are falling into extreme poverty. “This disease-induced socioeconomic shock could not have come at a worse time than now for the sub-Saharan African economy,” he said, “awash in increasing poverty, worsening climatic conditions, a widening budget deficit for countries and a looming debt crisis.”

For some African countries, Father Chilufya worries that it is already too late to avoid a crisis. In countries such as the Democratic Republic of Congo, São Tomé and Príncipe and Mozambique, “the crisis is already there,” he said. “Many African governments do not even have the funds to fight the pandemic and shore up their economies.”