‘Their tents are covered with ice.’ Texas Catholic Charities confront extreme cold and snow on both sides of the U.S.-Mexico border 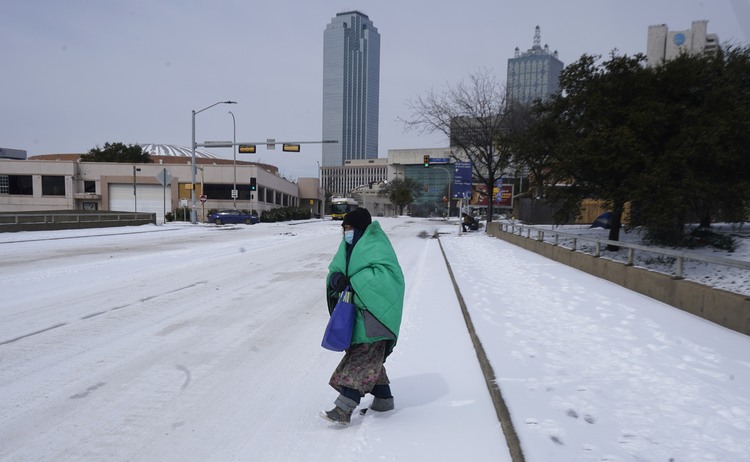 A woman wrapped in a blanket crosses the street near downtown Dallas, Tuesday, Feb. 16, 2021. Temperatures dropped into the single digits as snow shut down air travel and grocery stores. (AP Photo/LM Otero)

“It’s a crazy, bitterly cold time for us in Texas,” Betsy Ballard, the director of communications for Catholic Charities of the Archdiocese of Galveston-Houston, said by email as her community attempted to emerge from a weekend cold snap that has besieged the southwest. She said most Texans were “ill-prepared to deal with substantial icing and power loss.... [I]t’s heartbreaking for the thousands of people who lack sufficient resources to remain warm and fed.”

Rolling blackouts and more bad weather on the way have most Texans hunkering down under blankets and trying to stay as warm as they can on Feb. 16. Those lucky enough to have natural gas fireplaces were using them for warmth as others endured hours with no help from electric heating systems or space heaters as downed power lines and rolling blackouts meant spotty-to-no electric service for millions across the region.

Ash Wednesday Services have been canceled at most parishes in the Diocese of Dallas, with many churches hoping to reschedule Lenten ashes for Sunday Masses, assuming more cold and snow do not derail the weekend schedule, too.

Rolling blackouts and more bad weather on the way have most Texans hunkering down under blankets and trying to stay as warm as they can.

Conditions on both sides of the border were challenging, said Norma Pimentel, M.J., the executive director of Catholic Charities of the Rio Grande Valley. She said as many as 500 newly arriving asylum seekers were forced to seek shelter at a C.C.R.G.V. respite center in Brownsville to escape the cold this weekend.

“Right now because of the freezing temperatures unfortunately the families are suffering tremendously,” Sister Pimentel said. “The cold is so severe...their tents are covered with ice. It’s been very hard for families, especially the children.” Just hearing the parents stories has been heartbreaking, she said, noting that one mother had sent her “a video of a little boy crying because his little feet just hurt too much.”

Most of the people in the camps, she said, come from Central America’s Northern Triangle states of El Salvaor, Honduras and Guatemala. They have little experience dealing with cold weather conditions and have no gear to fend off the cold.

“This is beyond anything they have ever experienced,” she said. “They’ve had so many hardships and things that they have had to deal with over two years now, so this is just devastating for them.”

Conditions on both sides of the border were challenging, said Norma Pimentel, M.J., the executive director of Catholic Charities of the Rio Grande Valley.

She has been making runs across the border with “blankets, socks and gloves and everything else,” but she said the need among the families for cold weather gear remains acute. Most are trying to stay warm around wood fires although a few outdoor propane heating units have been donated to fight off the cold. “Even people on this side are struggling because we are not used to this cold weather,” Sister Pimentel added.

Sister Pimentel said Mexican authorities have been doing what they can, offering to open a shelter up to the people in the camps. But she said many were unwilling to leave their belongings behind in the tent encampments and have remained within them exposed to the cold and snow.

“We’ve been hearing a lot of typical weather-related issues” from Dallas residents, he said, “pipes freezing, icy roads. It’s pretty severe especially for this area and for people who are not used to snow.”

Other diocesan and Catholic Charities offices across Texas were likewise forced to close because of dangerous road conditions, lost power and rolling blackouts caused by downed lines and soaring electric demand for home heating.

Sister Pimentel has been making runs across the border with “blankets, socks and gloves and everything else,” but she said the need among the families for cold weather gear remains acute.

Folks have been struggling with the record single-digit cold, he said. Even though the storm left only a few inches of snow in many parts of Texas and Oklahoma, few people in the region have the shovels, salt, snow tires and other winter weather gear to get through a storm safely, Mr. Bermender said.

Much like the early days of the Covid crisis, he said, area supermarkets were cleared out as residents stocked up before the storm. That is why he is particularly eager to get Catholic Charities Dallas’s mobile food distribution trucks back on the road as soon as possible. “We already faced a huge hunger need” before the storm, he said. Mr. Bermender hopes to have the trucks back in circulation by the weekend, but the forecast is not promising. There is the possibility of another winter storm that could leave three to six more inches of snow.

Middle-class Texans may be dealing with anxiety and inconvenience as power outages deprive them temporarily of heat, but he said the storm has been hardest on the most vulnerable in Dallas, especially its homeless residents outdoors without cold-weather gear.

More than 100 homeless people sheltered from the cold at the St. Jude Center Park Central, opened in December by Catholic Charities Dallas and the Catholic Housing Initiative

Before the cold arrived, Ms. Ballard said, her Galveston-Houston office had “acquired kits with a blanket, mittens, socks and food for people who are homeless” and began distributing them this week.

The Galveston-Houston Catholic Charities office will not be able to open its food pantries this week, she said, “because even our main food supplier, the Houston Food Bank, had to shut down due to icy road conditions.”

Folks have been struggling with the record single-digit cold. Few people in the region have the shovels, salt, snow tires and other winter weather gear to get through a storm safely.

The archdiocese has launched a special fundraising appeal for its cold weather response.

All the regional Catholic Charities heads asked for prayers to help seek Texans through the next difficult days ahead but added practical support was also welcome.

Sister Pimentel asked also for prayers that the Biden administration follow through on its proposed policy reforms on the treatment of asylum seekers at the border as it attempts to disentangle from the “Remain in Mexico” plan to allow asylum seekers.

That Trump administration policy, meant to prevent asylum seekers from establishing residence in the United States as their cases were heard in immigraiton courts, has in the end left hundreds of families stranded at the border and now exposed to dangerous cold. “It’s unfortunate that policies can exist without consideration of humanity,” Sister Pimentel said. “So I’m hopeful that this administration can change that.”