The Trump administration wrecked refugee resettlement. Can Biden build it back? 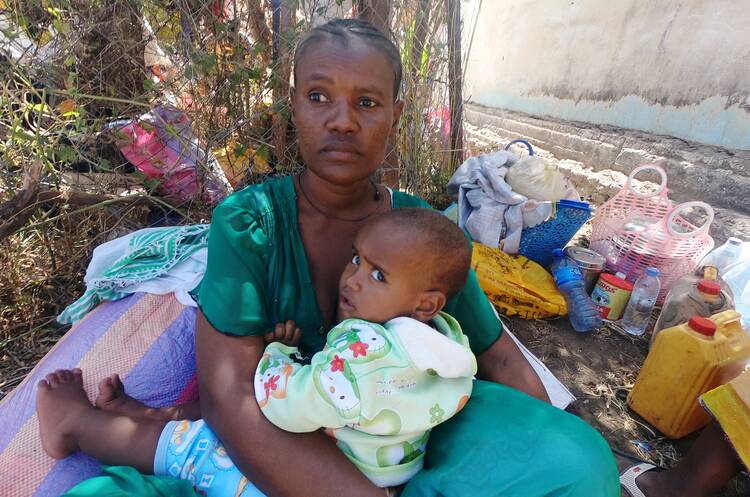 An Ethiopian woman and child, who fled the ongoing fighting in the Tigray region, are seen at the al-Fashqa refugee camp in Sudan on Nov. 14, 2020. (CNS photo/El Tayeb Siddig, Reuters)

In what will no doubt be the beginning of a series of dramatic breaks with the policies of his predecessor, President-elect Joe Biden pledged last week to raise the annual ceiling on refugee resettlements in the United States to 125,000. Under President Trump, those “presidential determinations” had plummeted 86 percent from the 110,000 established in the last year of the Obama administration. In the final year of his presidency, Mr. Trump set a historic low of only 15,000 for 2021.

In most years actual resettlement numbers fall significantly below those ceilings. That means, said Ashley Feasley, the director of Migration Policy and Public Affairs at the U.S. Conference of Catholic Bishops, “in addition to record low presidential determination numbers, there were record low numbers of people who were allowed to be resettled, which means record low numbers of people able to reunite with their families [and] to utilize the United States as a place to flee from persecution and, frankly, a real weakening of the infrastructure in the United States of resettlement agencies who were able to welcome and resettle refugees.”

Mr. Biden chose the 40th anniversary celebration of Jesuit Refugee Service last week to formally announce the new ceiling and a renewed U.S. commitment to accepting refugees. “The Biden-Harris administration will restore America’s historic role in protecting the vulnerable and defending the rights of refugees everywhere and raising our annual refugee admission target to 125,000,” he said, in a recorded message shared during the online event for JRS.

Catholic Charities U.S.A. spent decades building a domestic network to assist the social integration of incoming refugees. Three years of declining numbers and obliterated budgets took a sledgehammer to all that.

Like other refugee advocates, Ms. Feasley welcomed the higher number but believes it may be hard “to get there” in 2022. “There’s a lot of systemic damage in the resettlement system, both domestically and internationally, that has to be addressed,” she said. “That being said,” she added, “our teams are confident that they can ramp up if they have a cooperative partner in the federal government, which we’re certainly hopeful that we will.”

The office of the U.N. High Commissioner for Refugees reports that globally there are just under 80 million people who have been forcibly displaced. While most displaced people remain within the borders of their nations of origin, that figure includes 26 million refugees, people forced to cross borders to escape conflict or other humanitarian crises.

Just about one percent of the world’s refugees are resettled in third countries each year. Before the gravity of the coronavirus pandemic became evident in 2020, the United Nations had hoped to improve that figure to three percent by 2028. For decades the world leader in accepting refugees for resettlement, the United States surrendered that position to Canada in 2018.

Agencies like Catholic Charities U.S.A. spent decades building a domestic network of offices across the country that assist in social integration, education and job placement for incoming refugees. Three years of drastically declining numbers and obliterated budgets took a sledgehammer to all that.

The abandonment of the U.S. commitment to refugees has meant closed offices and lost institutional knowledge, said Chris Ross, senior manager for social policy at Catholic Charities U.S.A. He grimly noted that about half of C.C.U.S.A. refugee resettlement offices around the country have closed during the Trump administration. C.C.U.S.A. had maintained about 80 resettlement offices in 2016. “Now it’s down in the 40s,” Mr. Ross said.

Every independent Catholic Charities agency approached the decline of the system in its own way, but Mr. Ross said most sought to retain critical refugee advocacy staff through reassignment. Others had no choice but to lay off staff, many of whom had deep knowledge of the complex work of integrating refugees into U.S. society.

The truth about refugees is that they prove an economic and cultural boon wherever they land, opening new businesses and taking on difficult jobs that few others are willing to accept.

“Losing that institutional knowledge is not something you can adapt to quickly,” he said. “There have been people who have been doing this work for years.” All that will have to be rebuilt—and quickly—if Mr. Biden’s goal for 2022 is to be reached.

The damage has been deep. Losses include staff members with language skills for communicating with refugees and staff who had learned how to wade through the sometimes Byzantine federal and local bureaucracies that manage refugee and community services. But the damage was not limited to the domestic infrastructure of the refugee resettlement network.

“Global resettlement has been cut in half from 162,000 refugees that were resettled in 2016 to 82,020 in 2019,” said Ms. Feasley. She connects that dramatic international drop-off to decisions made in Washington. “The U.S. was a global leader on refugee resettlement,” she said. “When the U.S. would resettle more, other countries would resettle more.” The Trump administration has demonstrated that the opposite can occur too.

Throwing the system into deeper chaos, she said, were executive orders like the so-called Muslim ban, which attempted to prohibit refugees from some of the world’s most acute crisis zones from entering the United States. The system was further degraded by the haphazard manner the Trump White House treated the issue.

Presidential determinations of refugee numbers are supposed to be calculated in consultation with Congress and in dialogue with the receiving agencies like C.C.U.S.A. During the last few years under Mr. Trump, the determinations were set without consulting congressional or advocacy experts, Ms. Feasley said. The last presidential determination was made just 34 minutes away from its statutory deadline on Oct. 1. The administration also dispensed with the normal practice of establishing regional allocations based on need, instead prioritizing geopolitical interests of the United States.

Refugees are helping Americans get closer to normalcy as the pandemic continues, “delivering our food, working in meatpacking” at no small risk to themselves.

But beyond the institutional destruction, Mr. Trump’s scapegoating and demonizing of refugees during his campaign has also damaged the public’s perception of refugees.

One of his last campaign stops in Duluth, Minn., included an example of the often harsh rhetoric deployed by the president regarding refugees. “Biden will turn Minnesota into a refugee camp,” Mr. Trump told cheering supporters on Sept. 30, “overwhelming public resources, overcrowding schools and inundating hospitals. You know that. It’s already there. It’s a disgrace what they’ve done to your state.”

But the truth about refugees, according to advocates, is that they prove an economic and cultural boon wherever they land, opening new businesses and taking on difficult jobs that few others are willing to accept. Some refugee communities have helped reinvigorate ailing local economies, Mr. Ross said.

Ms. Feasley added that refugees often assume the “essential jobs” that have put them on the frontlines during the Covid-19 crisis. Refugees and other immigrants, she argued, are helping Americans get closer to normalcy as the pandemic continues, “delivering our food, working in meatpacking” at no small risk to themselves.

The president frequently described refugees as a security threat. In the real world, that has not been the case, said Ms. Feasley. “For individuals who are coming through the legal immigration system to the United States, there is not a population that is more vetted by the U.S. government than refugees are, and this has been the case prior to the Trump administration,” she said.

“I think vetting is always an important issue and always needs to be looked at and improved upon, but at the same time we have resettled in this country over three million refugees with very few incidents.”

As advocates for refugees look forward to years of rebuilding under the incoming Biden administration, Mr. Ross describes their mood as pragmatic but hopeful. “Morale has been pretty low because of the administration’s hard stance on immigration in totality,” he said. “We’re hopeful with the new administration, but the effects will last for a while.”

Mr. Ross declined to speculate which refugee community might be considered most in need as the United States considers reopening its doors for fiscal 2022. “If you find yourself in a refugee situation, it’s really tough for you,” he said. “You literally have been forced out of your home for different reasons, but they are all bad.”

In the United States, he said, “we’re blessed that we don’t have to deal with some horrors that exist in the world that other people do.” More reason, he argues, that Americans should be determined to rebuild the “bedrock” legacy of a U.S. commitment to welcoming refugees.

“In the past we have had historic numbers of refugees,” Mr. Ross said. “That’s something we should be proud of.”