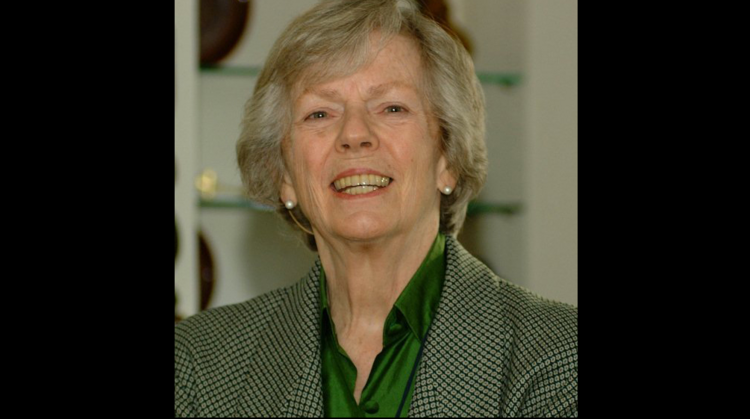 Margaret Snyder, the American Catholic social scientist who died on January 26 at age 91, focused on women’s rights and economic development with implacable resolve. Snyder’s manifold accomplishments were first encouraged by Catholic mentors who believed that rather than speaking reductively of women’s rights or civil rights, the all-embracing term of human rights can be most apt.

A 1946 graduate of The Convent School in Syracuse, N.Y., and a 1950 graduate of the College of New Rochelle, she was inspired by the sense of ethics exemplified by her parents. Her father, a physician who tended impoverished patients and her mother, a silent film pianist who was underpaid for her work because of her gender, provided a model for Snyder’s later career projects. She was also enlightened by local family friends such as Theodore Hesburgh, C.S.C., later president of the University of Notre Dame. Father Hesburgh also advocated for development and women’s rights as co-chair of the National Cambodian Crisis Committee and as a supporter of the Equal Rights Amendment.

Other family friends included the pacifist Daniel Berrigan, S.J. In an article published in 1977 in Movement Magazine, a U.K. student Christian publication, Father Berrigan wrote, “Women who want to enter the priesthood, or who are already ordained, have at least some inkling of the stalemate within the ranks. The truth of being woman is a good boot camp for being a nobody; in culture, in church.” So while Snyder was most influenced by her own family’s life experience, the presence of insightful and perceptive Catholic allies from her young years also helped form her vocation.

While in high school, she volunteered at a Syracuse settlement house, helping African Americans who had relocated from Southern states. In 1952, she earned a master’s degree in sociology from The Catholic University of America.

At age 24, she was hired as women’s dean at Le Moyne College, a Jesuit institution in Syracuse. At the time, she was the youngest female administrator with such responsibilities in the United States. Yet a few years later, while on a Catholic retreat, she decided to follow President John F. Kennedy’s advice to young Americans to volunteer in other countries.

In 1961, her choices were Tanganyika (later Tanzania) and Uganda. From there, she never looked back, eventually emerging from Father Berrigan’s “boot camp for being a nobody” by founding the United Nations Development Fund for Women, later known as UN Women. She was also a co-founder of the African Training and Research Centre for Women, among other accomplishments.

She did so by displaying uncommon determination. A friend and colleague, Nancy Hafkin, described one expression of Snyder’s courage in an open letter posted online after her death. In 1978, when both were working in Ethiopia, several reports essential for eliciting funding had to be printed at a time of paper shortages due to political violence. Hafkin informed Snyder: “We can’t do it. There’s no paper...and the ports are closed.” To which Snyder replied, “And you’re going to let that stop you?”

Cherished by generations of colleagues in the development field, Margaret Snyder found the strength to face down U.N. bureaucrats dismissive of her innovations.

As it turned out, Hafkin sourced the necessary paper from the local American embassy and funding was renewed.

Snyder also campaigned to raise official awareness that although worldwide development programs were overwhelmingly directed at men as heads of households, “historically, women's substantial contributions to family and national well-being were so familiar as to be invisible,” as Snyder mentioned in Transforming Development: Women, Poverty and Politics (1995). In the same book, she likewise observed: “The irony is that we have not yet given women the chance to make life better for their families, and so to make life better for everyone.”

Fortunately, despite societal challenges, “women have always joined forces to help each other,” she wrote. They did so despite bureaucratic impediments, as when some of her United Nations colleagues opposed her grassroots-level efforts, preferring overarching programs such as the World Bank’s so-called structural adjustment programs (SAPs), pressuring countries in Africa and elsewhere to accept loans which upset local agricultural and industrial economies.

After listening to dozens of African businesswomen, Snyder compiled Women in African Economies (2000), in which some of the interviewees are plainly surprised that anyone cares about their views on economic and social pressures as women trying to support their families.

Snyder was also recognized by colleagues in the development field for her willingness and ability to face down U.N. bureaucrats dismissive of her innovations. In a reminiscence published in July 2020, Snyder recalled that when she tried to brief one U.N. executive on her work’s conceptual framework, he exclaimed: “You women are not supposed to conceptualize.”

Growing Up Berrigan: Portrait of a family of peacemakers
George M. Anderson

Even worse, in a bout of bureaucratic one-upmanship, when she was on a fundraising mission to Tokyo, her group’s offices were “without warning moved to another building, scattering documents along the way.” In response, Snyder’s colleagues from the International Women’s Tribune Centre near the United Nations created a poster to encourage her staff, reading: “They can move us but they can’t stop us.”

Her article concludes: “Through all of the administrative issues, we were reminded that working to empower the poorest women was threatening to some high level and powerful people. They could move us, but they couldn’t stop us.” Indeed, her decades of activism made a continuity possible, so that one friend, Winifred Byanyima, a Ugandan aeronautical engineer and diplomat, could post in an online tribute: “You did your work, you made your mark…A luta continua!”

The last phrase, a rallying cry during Mozambique’s war for independence, means “the struggle continues.” It has been echoed by human rights activists in Uganda, Nigeria, South Africa and Indonesia.

Characteristically, a family-penned obituary suggested that in lieu of flowers, contributions be made in Snyder’s name to Mount Saviour Monastery in Pine City, New York or Abbey of Regina Laudis in Bethlehem, Connecticut, both Benedictine institutions, as well as the Green Belt Movement, an indigenous environmental conservation organization based in Kenya.