Can Joe Biden solve the Little Sisters of the Poor dilemma? 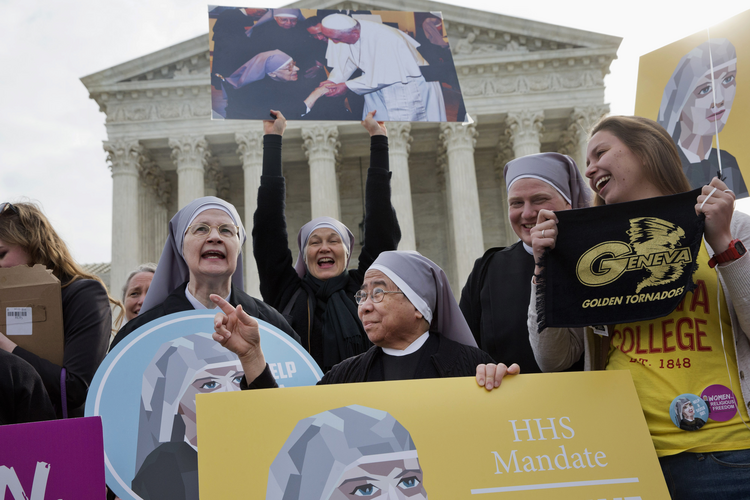 Nuns with the Little Sisters of The Poor, including Sister Celestine, left, and Sister Jeanne Veronique, center, rally outside the Supreme Court in Washington, Wednesday, March 23, 2016, as the court hears arguments to allow birth control in healthcare plans in the Zubik vs. Burwell case. (AP Photo/Jacquelyn Martin)

(RNS) — If there is one thing Joe Biden does not need, it's a lawsuit against the Little Sisters of the Poor, a Catholic religious order of women who care for the elderly.

If he's deluded on this score, he can ask his former boss, Barack Obama, how it went with Little Sisters of the Poor Home for the Aged v. Sebelius, a case litigated over two years that the Obama administration lost in both the court of public opinion and the U.S. Supreme Court.

It does not matter that the “little” sisters are in fact a multi-state organization with 30 residences and hundreds of lay employees. The optics of Catholic nuns in full habit on the steps of the U.S. Supreme Court, portraying themselves as victims of government bullying, is a political loser for the administration. Even liberal justices are sympathetic to the sisters.

The optics of Catholic nuns in full habit on the steps of the U.S. Supreme Court, portraying themselves as victims of government bullying, is a political loser for the administration.

The Obama administration's interpretation of the Affordable Care Act included a requirement that all insurance plans include birth control as an essential part of health care. Known as the “contraceptive mandate,” this had been a key policy goal of women’s groups for decades. The U.S. Catholic bishops objected that their opposition to artificial contraception made the application of the ACA's plan to church institutions an affront to religious liberty.

The Obama administration did not want a fight with the bishops, so Health and Human Services provided a narrow exemption for religious entities that have moral objections to birth control. But while the HHS' workaround exempted parish secretaries and diocesan employees, it did not excuse Catholic hospitals and colleges, which have tens of thousands of employees, both Catholic and non-Catholic.

Catholic officialdom saw the HHS proposal, which was poorly drafted and poorly defended, as a direct attack on Catholic institutions and beliefs. For example, HHS did not consider education and healthcare ministries of the church.

In fact, it was more incompetence than conspiracy. The HHS lawyers were experts in health care law, not the First Amendment or Catholic theology. They had no idea of the minefield they were wading into.

The Obama administration was portrayed as anti-Catholic by pro-life groups and, of course, Republicans. The Catholic bishops, meanwhile, were portrayed by pro-choice groups as a bunch of old men who wanted to take away women's birth control. Many interest groups opposed any compromise because they profited from the fight through publicity and fundraising.

The Catholic bishops, meanwhile, were portrayed by pro-choice groups as a bunch of old men who wanted to take away women's birth control.

For their part, the bishops and the nuns played their hand aggressively. "The Little Sisters escalated their demands every time the Obama people made a concession to satisfy them," explained Professor Douglas Laycock, a religious freedom expert at the University of Virginia School of Law.

The next version of the regulations was better written but more complicated. In brief, HHS provided that if the Catholic organization did not want to pay for birth control in its insurance plan, then the insurance company would have to pay for it.

All the organization would have to do is sign EBSA Form 700 and file it with the government saying that it did not want to pay for birth control in its insurance. The government would then notify the insurance company that it was responsible for paying for the birth control.

This bureaucratic requirement, however, proved an Achilles’ heel to the government proposal, as I warned the White House before the regulations were published. The Little Sisters argued that by signing the form, they were giving their insurance company permission to provide birth control to their employees. They referred to the form as a “permission slip.”

For the sisters, this was “cooperation with evil” and, therefore, morally forbidden.

They referred to the EBSA Form 700 as a “permission slip.” For the sisters, this was “cooperation with evil” and, therefore, morally forbidden.

Most Catholic moral theologians think that the sisters are being overly scrupulous in their thinking, but that was irrelevant to the justices. Legally, it is the sisters' consciences that mattered, not the theologians'. The court ruled that the sisters did not have to file a form with the government if they “have religious objections to providing coverage for contraceptive services.”

That didn't end the debate. The court left it to the parties to work out a way to provide contraceptives to female employees without violating the consciences of the sisters.

In a second case, Little Sisters of the Poor Home for the Aged v. Burwell, the court again "punted," in the opinion of one expert. The court remanded the case, which another analyst explains meant the parties would be “afforded an opportunity to arrive at an approach going forward that accommodates the challengers’ religious exercise while at the same time ensuring that women covered by the challengers’ health plans receive full and equal health coverage, including contraceptive coverage.”

Most Catholic moral theologians think that the sisters are being overly scrupulous in their thinking, but that was irrelevant to the justices. Legally, it is the sisters' consciences that mattered, not the theologians'.

In other words, work it out and don't come back.  That may have been "wishful thinking," according to Laycock. "If you read the briefs, each side had conditions or reservations that were deal killers for the other side."

All of this became moot when the Trump administration exempted religious objectors from the contraceptive mandate. Trump even extended the exemption to for-profit corporations, including those big enough to be listed on the stock exchange.

The Biden administration has been left to pick its way through a minefield. It will certainly want to deal with the exemption for profit-making corporations, but what about the Little Sisters?

All of this became moot when the Trump administration exempted religious objectors from the contraceptive mandate.

The goal should be to try to find a procedure that provides contraceptives to female employees without compromising the consciences of religious nonprofits. That will require sitting down with representatives of the religious organizations and listening to them.

A careful study of the 2016 Supreme Court decision shows a way out.

How we got here: The saga of the Little Sisters of the Poor and the birth control mandate
Ellen K. Boegel

If in some unusual cases this process does not work, for example if the insurance company is a religious nonprofit like one run by the Christian Brothers. Then the government should be responsible for paying for the contraceptive coverage.

Women who have no religious objections to contraceptives should not be stopped from getting them. To do so would be an infringement on their religious freedom, as their beliefs include no such ban.

It remains to be seen if both sides want to find a resolution to this conflict. Republicans enjoy seeing Democratic administrations in fights with nuns. Democrats like to prove their feminist credentials by fighting for contraceptives. Each side is appealing to parts of their base.

But one way out is to eliminate Form 700. It will be a test for both sides to see if they truly want to find bipartisan solutions or just keep fighting.