How we got here: The saga of the Little Sisters of the Poor and the birth control mandate 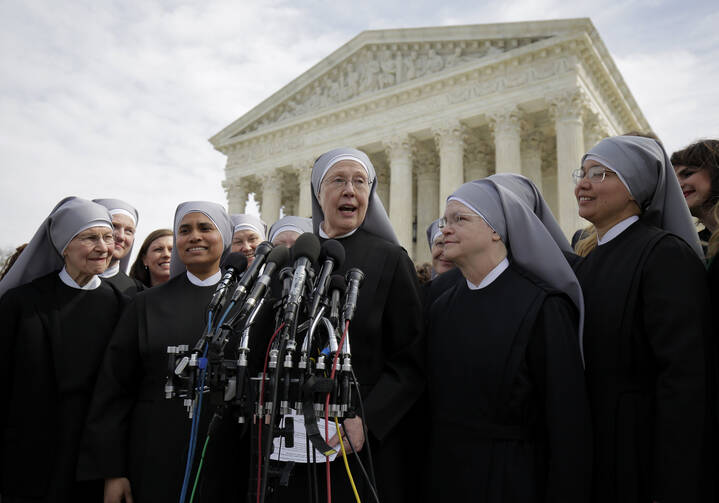 In this 2016 file photo, Sister Loraine Marie Maguire, mother provincial of the Denver-based Little Sisters of the Poor, speaks to the media outside the U.S. Supreme Court in Washington. (CNS photo/Joshua Roberts, Reuters)

Justice Clarence Thomas’s majority opinion in Little Sisters of The Poor Saints Peter and Paul Home v. Pennsylvania is a decisive win for religious rights advocates, but it may not be the last chapter in a saga that began in 2010 just months after Congress passed the Patient Protection and Affordable Care Act and the Obama administration’s Health Resources and Services Administration issued the first of many “comprehensive guidelines” implementing the A.C.A.’s “preventive care and screenings” requirement, which was added before the law’s passage by the Women’s Health Amendment. The complexity of the previous sentence gives only a glimpse of the procedural intricacies discussed in the Court’s majority, concurring and dissenting opinions. When taken together, those 78 pages could serve as a minicourse on the balance of power among individuals, federal and state authorities, and the legislative, executive and judicial branches of government.

Justice Clarence Thomas’s majority opinion is a decisive win for religious rights advocates, but it may not be the last chapter in this story.

The A.C.A., often referred to as Obamacare, was the most important legislation of Barack Obama’s presidency. Prior to its passage, many healthcare policies denied coverage for pre-existing conditions, set lifetime and annual caps on payments and removed sons and daughters from family plan coverage once they turned 21. Many policies also failed to provide coverage for essential services, such as substance disorder treatment. The purpose of the A.C.A. was to provide adequate insurance coverage to as many Americans as possible by setting minimum coverage requirements for qualified plans and requiring employers with more than 50 full-time employees to either provide qualifying plans or pay an Employer Shared Responsibility Payment tax, designed to offset federal tax credits granted employees who purchased their own insurance.

To make individually purchased policies readily available, the federal government offered states the opportunity to set up health insurance exchanges and participate in a Medicare expansion program that grants coverage to higher earning low income workers. (As written, the law required state Medicare expansion, but that was ruled unconstitutional in 2012). The law also imposed a tax penalty on individual taxpayers who did not provide proof of qualified healthcare coverage.

To minimize this rule’s impact on religious rights, H.R.S.A. first created a religious exemption and then a religious accommodation for objecting employers.

Numerous rules and iterations of rules implementing the A.C.A. have been issued by various administrative agencies since the law was enacted in March 2010, but only two provisions are relevant to the Little Sisters of the Poor litigation. The first is the inclusion of contraceptive services in the list of “preventative care” requirements; the second concerns the application of religious exemptions and accommodations.

Since 2011, H.R.S.A. rules have required qualified plans to include zero-cost (to the insured) coverage for all contraceptive methods approved by the Food and Drug Administration. These include methods considered by some, such as the Little Sisters of the Poor, to be abortifacients. To minimize this rule’s impact on religious rights, H.R.S.A. first created a religious exemption and then a religious accommodation for objecting employers. The distinction is more than mere semantics. An exemption eliminates the requirement to do anything related to contraceptive coverage. Exempt employers are free to provide or not provide coverage for contraceptive services. Until 2018, the contraceptive coverage exemption was called the “church exemption” because of its narrow application to churches, church associations and “the exclusively religious activities” of religious orders. The church exemption did not apply to the Little Sisters of the Poor or other religious employers that hire lay workers to provide social services, such as health care and education.

Despite qualifying for the religious accommodation, the Little Sisters of the Poor, and others, were not satisfied.

Despite qualifying for the religious accommodation, the Little Sisters of the Poor, and others, were not satisfied. No matter what changes H.R.S.A. made to the opt-out mechanism, each required some action on the part of the employer and, according to the Little Sisters and their co-plaintiffs, any action, even one as minimal as checking a box on a form, unduly burdened their religious rights. The Supreme Court first took up this claim in Zubik v. Burwell (2016), but deferred from deciding the controversy when all parties thought the dispute was capable of settlement.

Alas, no compromise mechanism was devised, but the 2016 election ushered in a new administration and that administration wrote new rules. In 2018 H.R.S.A. dramatically broadened the category of employers eligible for either a religious exemption or accommodation. Under these rules, all non-governmental employers, including for-profit entities and individuals, that have sincerely held religious or moral objections to contraceptive coverage are exempt. These employers are also eligible, in their discretion, to opt for accommodations. The expanded exemptions pleased the Little Sisters, but displeased states that would now be responsible for the healthcare consequences of thousands of residents no longer provided contraceptive coverage. Pennsylvania, joined by New Jersey, challenged the new rules as procedurally deficient. The Little Sisters were permitted to intervene in the lawsuit to argue the religious aspects of the case.

The case likely will continue in the lower courts where judges will determine whether the broad exemption given by the Trump administration is arbitrary and capricious.

This case was not squarely decided on the religious liberty issues argued by the Little Sisters, but rather on the authority of the various administrative agencies to devise exemptions and accommodations to the A.C.A. The A.C.A. laid out, in 906 pages, only the bare bones of the law. The nitty gritty details, such as what constitutes “essential services” and “preventive care,” was left, as is typical, to various administrative agencies.

Administrative agencies play an important role in all levels of government. They usually operate under the auspices of the executive branch, but are considered the “fourth branch” of government and often function as mini-governments unto themselves carrying out legislative (regulatory), executive (enforcement) and judicial (adjudicative) duties. The extraordinary power granted administrative agencies is tempered by the enabling acts that create them, the A.P.A., which establishes the default guidelines that must be followed to legitimize administrative actions, and the language of each law they are instructed to implement. The Supreme Court’s recent decision nullifying the Department of Homeland Security’s decision to end Deferred Action for Childhood Arrivals (D.A.C.A.) was based, not on the department’s lack of authority, but on its failure to comply with A.P.A. requirements. When it comes to administrative agencies, the devil (or angel) is always in the details.

The majority in the Little Sisters case determined that the H.R.S.A. and other administrative agencies, did not overstep their authority when they decided to devise religious exemptions and accommodations, even though the A.C.A. itself is silent in that regard. The majority also concluded that the rules were legitimate “good cause” exceptions to the rulemaking procedures usually required by the A.P.A.

Finally, the majority ruled that the agencies appropriately considered the religious freedom requirements of R.F.R.A. when they created the religious exemptions and accommodations. The Court did not, however, put an end to the litigation. As it stands, the case likely will continue in the lower courts where judges will determine whether the broad exemption given by the Trump administration to virtually any employer who wants it is arbitrary and capricious. The Little Sisters’s saga continues.