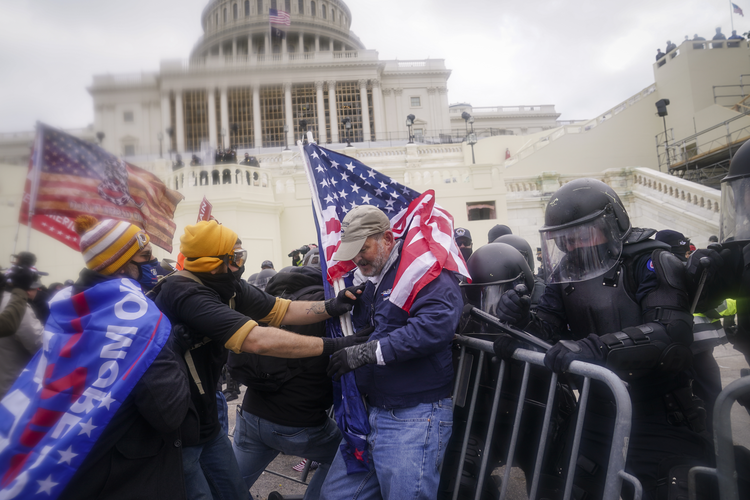 In the wake of the attack on the U.S. Capitol on Jan. 6, how can we achieve national unity and justice without being vengeful or dominative? (AP Photo/John Minchillo, File)

Joseph R. Biden Jr. chose the theme “America United” for his presidential inauguration—a prophetic gesture in light of the seditious attack on the U.S. Capitol on Jan. 6 and the subsequent impeachment of President Trump. Many of us are wondering what it will take to unite this nation and to restore public trust in our governing bodies as well as interpersonal trust between citizens.

In his inaugural address, President Biden built on wisdom from St. Augustine, claiming that “a people [is] a multitude defined by the common objects of their love,” and urged us to find those common objects. Though pride inevitably distorts our perception and pursuit of what is truly lovable, Mr. Biden’s exhortation “not to turn inward”—another Augustinian theme—urges us to pursue unity by reaching beyond our isolating comfort zones and relating rightly to others.

Restorative justice, of which St. Augustine was an early proponent, is a concept rooted in the biblical vision of shalom, or “all-rightness,” and it can provide a helpful framework for us now. Restorative justice is a paradigm for human interaction that focuses on building right relationships. As the theologian Stephen J. Pope wrote in America two years ago, “Restorative justice is strikingly different from criminal justice in giving priority to repairing the harm caused by wrongdoing—including first and foremost the harm done to victims but also to the wider community and even the perpetrators.” It posits that justice is not simply a matter of equity, fairness or retribution; it also must lead to flourishing.

Mr. Biden’s exhortation “not to turn inward” urges us to pursue unity by reaching beyond our isolating comfort zones and relating rightly to others.

If U.S. Catholics want the pursuit of national unity to be truly just, but not vengeful or dominative, we should consider some of the key principles of restorative justice.

First, all human beings are equal in dignity, whether they are perpetrators of harm or victims. Human dignity is not dependent on the moral character of one’s actions. The call to love our neighbors and desire their flourishing is made difficult—but is not reduced—by their complicity in wrongdoing. Dorothy Day put this succinctly: “You love God only as much as the [person] you love the least.”

Sinful actions violate the dignity of both the perpetrator (because their actions reject their identity as made in the image of God) and the victim (because the perpetrator has failed to acknowledge their true worth). Our anger at these actions should stem not only from the awareness that we or our neighbors have been violated, but also from the grief that comes from knowing the offender—also our neighbor—is not living up to the fullness of her dignity.

Second, all of creation is relational: We exist as part of an interconnected web of relationship, and every person is critical to the flourishing of the community. When an offense is committed, this web is broken and must be repaired by the offender for the sake of the common good. As Christopher Marshall, an advocate of restorative justice, has argued, offenders are obligated to demonstrate contrition, confession, change of life and atonement or reconciliation; and members of the broader community should examine their own systemic complicity in wrongdoing. If these conditions are not satisfied, justice cannot be realized because the relationships harmed by the offense remain distorted by the offenders’ recalcitrance. Until all members of a community are empowered to participate fully in interpersonal, social and political relationships, restoration is necessary.

Finally, truth-telling is a critical component of the practice of restorative justice, since our understanding of justice is influenced by our perception of reality. This involves making a good-faith effort to verify claims and to respect expert analysis. If truth continues to be manipulated for political gain, unity will be impossible. So we should ask: Which arguments ask us to incorporate both scientific evidence and broader experiences into our worldviews, and which arguments ask us to close ourselves off from the rest of the world? How can we work toward greater civic participation for all, as opposed to perpetuating exclusion?

Truth-telling is a critical component of the practice of restorative justice, since our understanding of justice is influenced by our perception of reality.

Each person will contribute to her own personal healing as well as to the restoration of community by engaging in active listening (particularly to those who have been directly harmed) and modifying behavior in light of this dialogue. Pope Francis puts this well in “Fratelli Tutti”: “When conflicts are not resolved but kept hidden or buried in the past, silence can lead to complicity in grave misdeeds and sins. Authentic reconciliation does not flee from conflict, but is achieved in conflict, resolving it through dialogue and open, honest and patient negotiation.”

These principles provide a guide for seeking unity in the current political climate. Our divisions have become increasingly vicious over the past few decades, and there are various theories about who is to blame. I suppose the answer is all of us, even if our only sin was typing an intemperate reply on social media. The Trump administration, however, went the farthest, subjecting Americans to constant falsehoods that culminated with a “big lie” about election fraud and resulted in the seditious, racist attack on our democracy. Because of the magnitude of this harm, we cannot move forward in truthful dialogue until it is fully addressed. This must be a focal point for restorative justice.

Those who condoned violence and undermined public trust in democracy by perpetuating lies about election fraud must take responsibility and help to repair the damage. (And, of course, personal reparations should be extended to those who have been directly harmed by this administration and its enablers.) St. Augustine got at the scope of this responsibility when he issued the following rebuke for a violent riot in the fourth century: “How easily those events might have been prevented or nipped in the bud.... Everyone was implicated in the outrages that were committed with their consent, even if they neither took part in them nor instigated them.”

How can we work toward greater civic participation for all, as opposed to perpetuating exclusion?

At a minimum, restorative justice will require public apology and the repudiation of lies and misinformation, combined with a commitment to truth-telling going forward. Condemning violence or asking for unity without accepting responsibility for past sins will not work, as it skips over the necessary steps of confession and contrition.

For the most egregious offenders, punitive measures may be necessary to motivate contrition and to protect the nation from further harm. Holding people accountable for their roles in injustice—whether through the impeachment process or by excluding someone from a social media platform—is not incompatible with national unity. Rather, it may be a necessary component of repairing harm.

At the same time, we must resist the desire to destroy those who offend us. Loving our enemies does not mean accepting the wrongs they perpetrate, but it does mean that our responses should be motivated by a desire to see them flourish in the fullness of their God-given dignity. Unless we keep this aim, our imposition of civic justice will not lead to unity but to vengeful oppression—an oppression far beyond the “cancel culture” of which we are so often warned.

As the restorative justice advocate Kay Pranis emphasizes, the movement is “deeply rooted in values of interdependence and non-domination” and in “honoring each individual as a unique and indispensable part of the larger whole.” In practical terms, this means that dismissing the concerns of our political opponents offhand will lead only to continued bitterness. To the extent that the left has failed to hear the right’s grievances charitably or to respond fairly to their legitimate needs, there is reparative work to be done on their side, too.

I hope President Biden will make use of restorative justice principles, but more importantly, I hope all Catholic citizens and leaders will infuse them into our political engagement. In the words of Pope Francis, injustices and hostility can be overcome only “by cultivating those virtues which foster reconciliation, solidarity and peace.”

As we move forward, let us examine our own complicity in injustice, making amends to those we have harmed and acting with the desire to restructure our political systems according to the principles of justice that lead to the flourishing of all.