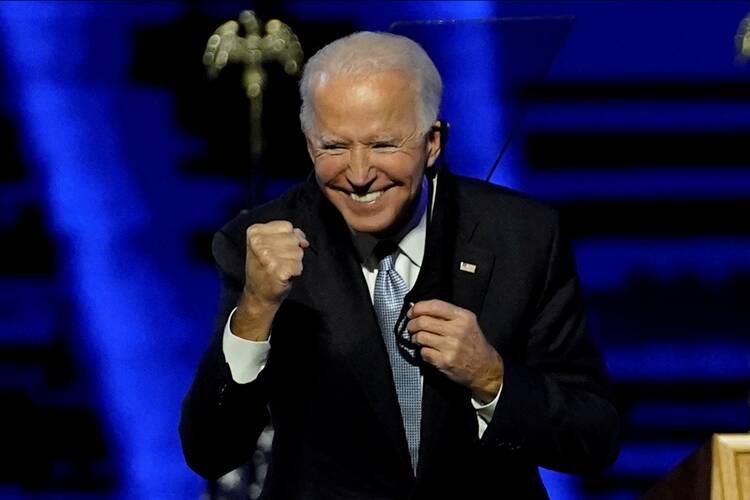 The “On Eagle’s Wings” debate was never just about a hymn. It was about whether Catholics will rip each other apart during the Biden presidency. The controversy over the song has come and gone. But the episode has a lasting warning for us.

Many Catholics, myself included, missed this at the time. Twitter was awash in musical takes after then President-elect Joseph R. Biden Jr. invoked the hymn in his Nov. 7 victory speech. Some noted the significance of the song for his family, others the pastoral implications for how we talk about hymns and devotions that others like.

But this conversation was divorced from the obvious and important context in which the hymn was invoked: the election of the second Catholic president in U.S. history. Politics—and not liturgy—was the frame for the conversation. But you never would have guessed that from our infighting.

The “On Eagle’s Wings” debate was never just about a hymn. It was about whether Catholics will rip each other apart during the Biden presidency.

Catholics are primed to import political controversies into their dealings with each other. And the fight over “On Eagle’s Wings” is not going to be the last such spat. Indeed, by President Biden’s inauguration, the disagreements had extended to the U.S. bishops. After Archbishop José Gomez issued a statement that criticized Mr. Biden’s support for abortion rights on the day of his inauguration, Cardinal Blase Cupich publicly rebuked the president of the U.S. Conference of Catholic Bishops, calling his statement “ill-considered.”

Mr. Biden is Catholic, and so we can count on more invocations of Pope Francis and Dorothy Day and will surely hear more about his deep devotion to religious sisters. (When the Electoral College sealed his victory on Dec. 14, the president-elect quoted the Prayer of St. Francis. His inauguration was also suffused with religious imagery.) Indeed, even his Mass attendance will become contentious. Moreover, the Biden administration, like the Biden campaign, at times is going to strategically deploy Catholic cultural reference points to mobilize certain kinds of Catholics. That means it will simultaneously countermobilize other kinds of Catholics, thus perpetuating and deepening Catholic divisions.

This is not to call into question the sincerity of Mr. Biden’s faith or to accuse him of seeking to divide the church. But we should not be naïve about the role religion plays in the electoral process and in governance. Religion is something that political campaigns and administrations selectively invoke to appeal to voters, much as they do with race or class.

I doubt many U.S. Catholics think about it this way. After all, it is easy to think that political manipulation is something that others fall prey to. When my candidates invoke such identities, they are being sincere. When other candidates do it, it is cynical. And so Catholics who loved the “On Eagle’s Wings” reference were largely unaware that they were being prompted to respond a certain way, just as those who dislike it were largely unaware that they were being countermobilized. But as we argued about a hymn, we were also reinforcing our political tribalism.

It is a cliché to decry the divides within U.S. Catholicism, but the Biden administration offers an opportunity for Catholics to resist playing into those divisions. Catholics need not give up their party affiliations nor change their voting behavior. Nor, for that matter, should they stop debating the Trump presidency or refrain from criticizing the incoming Biden administration. What Catholics do need to do, however, is become more conscientious of how their political affiliation defines them in general and and can reshape their religious identity in particular. We have to recognize the ways in which our political and ecclesial identities and behaviors interact to divide us. We have to recognize and resist those habits of division.

The Biden administration is going to routinely put Catholicism in the spotlight. Will non-Catholics see us as evangelizers of love and mercy? Or will we be defined by our bitter family feuds?

But this opportunity will be wasted unless Catholics can commit themselves to ideals of church unity and love of neighbor and can put those ideals into practice. No less important: How will Catholics present themselves to the rest of the country? The Biden administration is going to routinely put Catholicism in the spotlight, offering us a national stage to discuss our life and mission. Will non-Catholics, many of whom will be non-Christians barely aware of the Gospel, see us as evangelizers of love and mercy? Or will we be defined by our bitter family feuds? Will we choose ad intra warfare over ad extra evangelization?

Catholics have developed habits of division that may play out at every significant moment of the Biden administration. If that is true, then part of the solution to our woes is not just different or better ideas, but different and better habits. We need practices and spaces in which to grow into the kinds of Christians who can love and live and work together. Those are not the kinds of resources the political parties will give Christians, but they are the only way Christians can function in the parties if they are to be true to the Gospel.

The Gospel has no party, but it needs partisans.