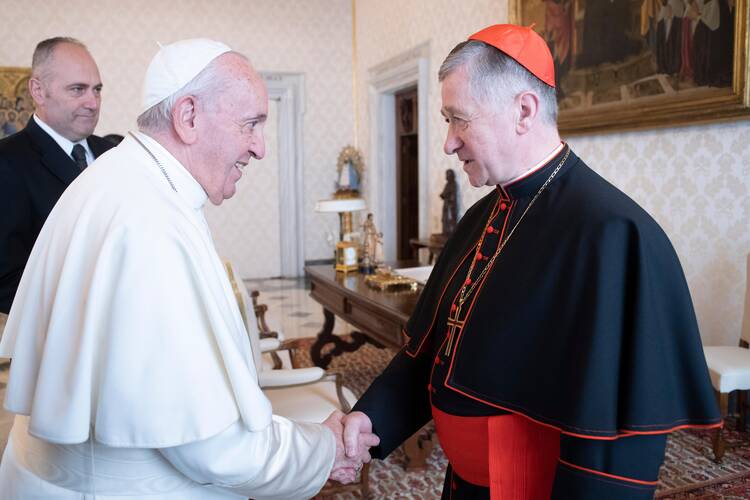 Pope Francis received Cardinal Blase J. Cupich in a private audience at the Vatican’s apostolic palace this Saturday morning, Jan. 30. He is the first U.S.-based American bishop to meet the pope since the assault on the Capitol, the inauguration of President Joseph R. Biden and the publication of the statement by the president of U.S. Conference of Catholic Bishops on the day of the inauguration, which did not go down well in the Vatican.

The cardinal, who was chosen by Pope Francis in September 2014 to be the ninth archbishop of Chicago, arrived in Rome on Wednesday, Jan. 27, to participate on the following day in a meeting of the Congregation of Bishops, of which he is a member. The congregation advises the pope on the selection of bishops and other matters relating to the episcopate. It was the first time since last February that he has been able to participate, and he was able to do so because, as reported in the Chicago media, he has received the Pfizer vaccine against Covid-19.

Vatican sources suggest that Pope Francis would have been keen to talk with the cardinal about the situation in the United States.

Francis has received Cardinal Cupich on a number of occasions at Santa Marta, the Vatican guesthouse where he lives, but news of such private encounters is not made public. Significantly, however, this time he decided to receive the Chicago cardinal in the private library of the apostolic palace, a sign that he wanted it made known publicly. The Vatican broke the news when it listed the audience in its daily bulletin given to the press.

Vatican sources (who did not want to be identified because they were not authorized to speak) suggest that Pope Francis would have been keen to talk with the cardinal about the situation in the United States. They said the pope has been following events there closely since the presidential election last November. They said he was briefed on the assault on the U.S. Capitol, the prayer service attended by Mr. Biden and Kamala Harris at the Lincoln Memorial with Cardinal Wilton Gregory and the inauguration on Jan. 20.

The same sources said Francis was fully briefed about the statement issued that same day by Archbishop José Gomez in the name of the U.S. bishops and the objections raised not only in private with the archbishop by several bishops, but also expressed publicly in different ways by some others, including Cardinals Cupich and Joseph W. Tobin of Newark. They said he was also informed of the public support for the statement by a number of bishops, including Archbishops Allen H. Vigneron, Salvatore J. Cordileone and Joseph F. Naumann and some lay Catholics including the author George Weigel and Tim Busch, the co-founder of the Napa Institute.

The sources said the pope was also briefed on the serious objections and reservations raised by several of his senior Vatican advisors to the U.S.C.C.B. president’s statement. Their objections were summarized succinctly for America by one advisor who asked not to be named. He said: “This was not the time, nor the place, nor the way [for such a statement].”

He elaborated, saying their disagreement with Archbishop Gomez’s statement is not about the abortion issue as such but relates to its confrontational approach, its timing and the accompanying strategy relating to “eucharistic coherence,” meaning refusing Communion, which was referred to in the letter from Archbishop Gomez to the bishops that accompanied the statement.

This morning, Pope Francis and Cardinal Cupich talked together in private. The Vatican did not disclose the content of their conversation, and the cardinal was not available for comment.

Correction, Jan. 30: Cardinal Sean O'Malley, the archbishop of Boston, did not publicly object to Archbishop Gomez's statement from the U.S.C.C.B. on the inauguration of President Joe Biden, but issued his own statement, which can be read here.