What will it take to end the death penalty? Catholic activists say a more visceral approach is needed. 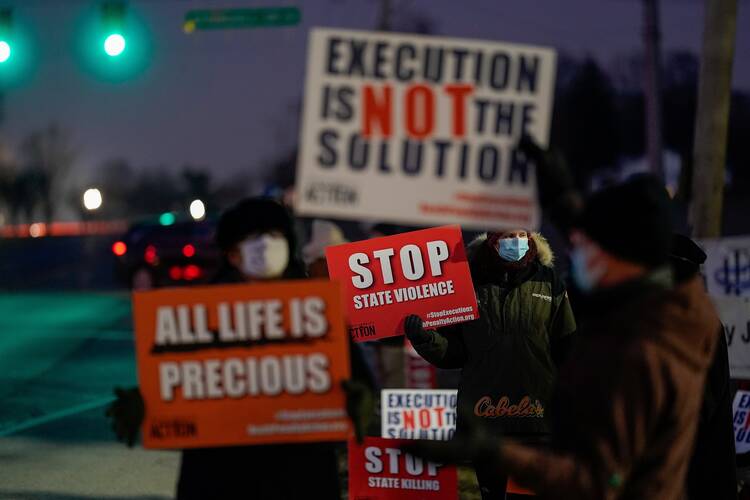 Demonstrators in in Terre Haute, Ind., gather to protest the execution of Lisa Montgomery on Jan. 12. She was put to death by lethal injection at the federal prison in Terre Haute soon after the U.S. Supreme Court lifted a hold on her execution at 1:31 a.m. (EST). She was the first woman to be put to death in federal prison since 1953. (CNS photo/Bryan Woolston, Reuters)

The federal death penalty will almost certainly be suspended under President Biden, and great strides have been made to reduce the use of the death penalty at the state level. But the work of putting an end to capital punishment is far from done, and recent events have pointed to the need for a conversion of U.S. culture from death and vengeance.

These were some of the themes that surfaced during a panel discussion on Jan. 8 sponsored by the Initiative on Catholic Social Thought and Public Life at Georgetown. The panel, “Killing In Our Name: Federal Executions and Pro-life Witness,” hosted by Initiative director John Carr, took the federal executions in the final days of the Trump presidency as its point of departure.

Krisanne Vaillancourt Murphy, the executive director of the Catholic Mobilizing Network, described this rush of federal executions as an “aberration,” as it does not reflect the great successes of the death penalty abolition movement in recent years: 22 states have abolished the death penalty, and 12 others have imposed moratoria or have not carried out an execution over the last 10 years.

The work of putting an end to capital punishment is far from done, and recent events have pointed to the need for a conversion of U.S. culture from death and vengeance.

Ms. Vaillancourt Murphy told America, “There is already signifcant momentum at the state level to move away from the practice of capital punishment.” During the discussion at Georgetown, Ms. Vaillancourt Murphy urged online participants to make the fight to end the death penalty their own, a point that the Most Rev. Daniel Flores, bishop of Brownsville, Tex., and chair-elect of the U.S. Conference of Catholic Bishops’ doctrine committee, echoed in noting that advocacy against the death penalty has to be integrated into parish life.

Indeed, such opportunities were as much part of the reason for the panel as the Trump executions. The participants at the Georgetown discussion evinced a measured optimism about what could be done under the Biden administration.

Ms. Vaillancourt Murphy laid out some of those possibilities for America:

At the outset, the Biden administration needs to immediately suspend federal executions—and from what he has declared in his campaign platform, we fully expect this will happen. Yet that is simply the beginning. President-elect Biden’s next steps could include declaring an official moratorium on federal executions for the duration of his term and commuting the death sentences of all those currently on the federal death row. Lastly, and perhaps the most politically challenging, Biden could advocate to end the death penalty in law with Congress and the states. All of these actions will take courage and political will, especially in these challenging and divided times in our country.

The Challenge of Conversion
The recent progress toward ending the death penalty is owed in no small part to the life and mission of Helen Prejean, C.S.J., one of the most famous anti-death penalty advocates in the United States, who spoke at Georgetown of the challenge of changing public opinion on capital punishment, calling it “a journey of conversion.” She spoke of the difficulties many have in seeing not only the dignity of innocent life, but also the dignity of those guilty of crimes—although she also noted that many on death row have been exonerated of crimes.

The church has always seen the death penalty as an “extreme measure,” even if the sense of the dignity of the condemned person has slowly “unfolded.”

Sister Prejean suggested that this conversion has to be preached to and undertaken by the entire people of God, not just priests and other faith leaders. She thus implicitly raised the question: How does the church reach members who are no longer regularly in the pews or parish halls?

This challenge of conversion was also addressed by Bishop Flores, who called for a change in how Americans “understand the human condition.” Bishop Flores said that “the one time in his public ministry Jesus had a chance to say yes, the death penalty is justified, is when they brought the woman caught in adultery, and they said, ‘The Law of Moses says…. And he didn’t deny the law, but he addressed himself to the condition of the ones who were condemning.”

The Rev. Dr. Jack Sullivan Jr., the executive director of the Ohio Council of Churches, noted the close connection between death penalty, race and poverty. He noted that in his early work he was discouraged from linking death penalty abolishment to racial justice because “no one would be willing to take the message seriously.”

But he refused to ignore the connection, instead seeing it as key to changing hearts and minds: “Anybody who espouses our faith must find himself interested in addressing the evils of racism and white supremacy.” As Dr. Sullivan told America, “If we Christians were to articulate and authenticate a vision of love for all of humanity in the public policy arena, we could see a plethora of unjust policies—from executions to the seemingly acceptable extrajudicial executions of unarmed Black people—coming to an end.”

The rush of federal executions was an “aberration” that does not reflect the great successes of the death penalty abolition movement in recent years.

Dr. Sullivan’s witness on the panel underlined that anti-death-penalty work is ecumenical, as has been all of his work. “Challenges would have occurred if we elected to allow our theological and cultural differences to discount and trivialize our areas of agreement,” he told America. “Fortunately, I experienced no challenges, just an appreciation for our willingness to work together and thus project a stronger anti-death-penalty witness together than any of us could have projected if restricted to our own groups.”

Changing Catechism
Despite whatever opportunities the Biden administration might offer for opposing the death penalty, Catholics continue to be divided by the issue, including in their reaction to Pope Francis’ changes to the Catechism in 2018. The Georgetown panel did not shy away from this challenge.

This controversy, Bishop Flores wrote recently in America, “centers around the historical fact that Scripture and tradition acknowledge the authority of the civil authority to administer [capital punishment]. How, then, can the church say it cannot justly be administered today by the public authority?”

On the panel, Bishop Flores offered an answer to that question. He noted that John Paul II focused on the question “What good does the death penalty serve in terms of protecting the wider community?” and concluded that “in most cases, the good can be served without the extreme measure of taking a human life.”

Pope Francis, he said, prudentially judged that “not only does it not serve a good, but you can protect society in other ways without going to the extreme measure of taking someone’s life.”

Bishop Flores emphasized that the church has always seen the death penalty as an “extreme measure,” even if the sense of the dignity of the condemned person has slowly “unfolded,” as Sister Prejean noted later, comparing the changing understanding of the death penalty to a similar process addressing slavery.

Pope Francis has said that “we are in a throwaway culture and we have a way of justifying heinous things because it is the law.”

Returning to the discussion of Jesus and the woman caught in adultery, Bishop Flores reminded the audience that Pope Francis has said that “we are in a throwaway culture and we have a way of justifying heinous things because it is the law.”

Mr. Carr noted that St. John Paul II called upon the United States to end the death penalty in 1999 during his visit to Saint Louis. The pope made that plea in a homily that focused on the need for the church’s new evangelization to be “unconditionally pro-life”: “The dignity of human life must never be taken away, even in the case of someone who has done great evil. I renew the appeal I made most recently at Christmas for a consensus to end the death penalty, which is both cruel and unnecessary.”

A Culture of Death

The panel sought to offer a broader vision of human dignity to challenge those who support the death penalty. Given Bishop Flores’s description of Pope Francis and Christ as addressing themselves “to the condition of the ones who were condemning,” one might think the mixed reception in the United States to Pope Francis on the death penalty reflects more than just a love of scriptural tradition narrowly construed, for it arises in a culture with a strong affinity for violence. Indeed, the panel happened only two days after the riot at the U.S. Capitol.

In a widely-circulated piece in The New York Times on Dec. 20, Elizabeth Bruenig reflected on the challenge of changing public opinion on the death penalty:

Arguments against the death penalty tend to be abstract: moral declarations about taking human life, conclusions from academic studies of legal procedures, dissections of prosecutions, or philosophical concerns about the limits of government power. But arguments for the death penalty are visceral: the blood of a baby girl seeping out into her eyes, the tangled scars crisscrossing her soft skin.

Ultimately, the Georgetown panelists urged a similarly “visceral” approach, with Sister Prejean noting the importance of stories and sharing experiences, and Bishop Flores’s call to “humanize” those subject to execution. Dr. Sullivan attributed his work to personal experiences of the murder of his sister, and Ms. Vaillancourt Murphy to the witness of advocates like Sister Prejean.

That visceral approach would seem to resonate with the Biden administration’s focus on reconciliation and compassion, but it will be challenged by all of the obstacles raised by the panelists: fear, anxiety, suspicion and the culture of violence evidenced by the Capitol Hill insurrection.

And thinking more generally about protecting human life, what can the movement to end the death penalty illuminate for the possibilities of resisting and converting the culture of death? How can the broader pro-life movement benefit from that work? These will be questions that anti-death-penalty efforts in the Biden years might help to answer.