In 2020, the Trump administration executed more prisoners than all states combined 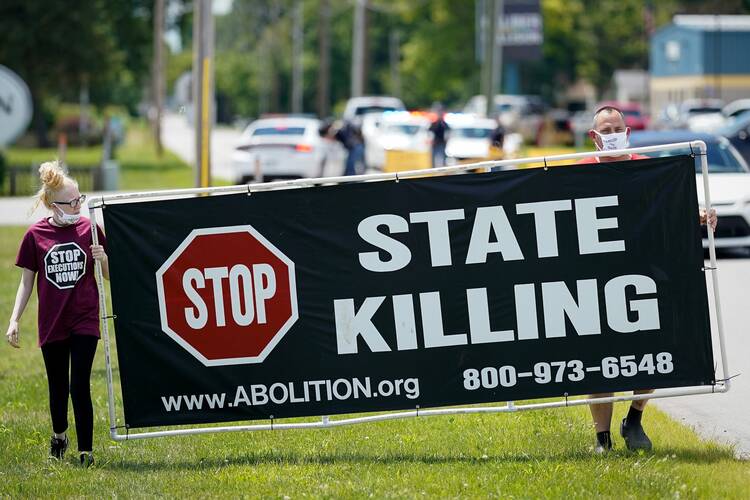 In July demonstrators show their opposition to the death penalty outside the Federal Correctional Complex in Terre Haute, Ind., where federal executions are conducted. (CNS photo/Bryan Woolston, Reuters)

As 2020 stumbles to a conclusion, the Death Penalty Information Center, in an annual survey released on Dec. 16, found much that was notable (Colorado became the 22nd state to abolish capital punishment) and much that was regrettable: The federal government made an aggressive return to the application of the death penalty after an informal moratorium of 17 years.

The Trump administration, in fact, was responsible for 60 percent of the nation’s total executions in 2020, thanks to an execution spree in the second half of the year that was without precedent and widely condemned. The U.S. Conference of Catholic Bishops was among the institutions and advocates that repeatedly urged a halt to the federal executions.

In their most recent statement on the issue, the U.S. bishops said, “The death penalty is not necessary to protect society. It is not necessary to hold people accountable for grave crimes. The decision not to execute someone, even someone who has done something terrible, is not ‘soft on crime’; rather, it is strong on the dignity of life.”

The Trump administration was responsible for 60 percent of the nation’s total executions in 2020, thanks to an execution spree in the second half of the year that was without precedent and widely condemned.

“A shameful aberration” is how Krisanne Vaillancourt Murphy, the executive director of the Catholic Mobilizing Network, described the Trump administration’s decision to resume federal executions this year. “It goes against nationwide declines in executions, falling death sentencing rates and a long-term drop in public support for capital punishment,” she said, responding to queries from America by email. “And it clearly violates church teaching.”

The Catholic Mobilizing Network promotes the abolition of the death penalty and models of restorative justice in collaboration with the U.S. bishops’ conference.

Ms. Vaillancourt Murphy added, “These executions are not being carried out in the interest of public safety, as evidenced by the multiple Covid-19 outbreaks to which the federal executions have been linked. It is hard to describe the restart in executions, after a 17-year hiatus, as anything short of vengeance.”

Pope Francis, in his address to the U.S. Congress during an apostolic visit to the United States in 2015, urged the global abolition of the death penalty, arguing that even “just and necessary punishment must never exclude the dimension of hope and the goal of rehabilitation.” In June, U.S. bishops voted to update the United States Catholic Catechism for Adults to reflect the church’s revised position that the death penalty is “inadmissible because it is an attack on the inviolability and dignity of the person.”

And in his recent encyclical “Fratelli Tutti,” Pope Francis asserted that there was no turning back from this new understanding of the inadmissibility of the death penalty, committing the church to its full abolition.

For the first time in the nation’s history, the federal government carried out more executions—10—than all of the states of the union combined—seven—and more than any previous administration in the 20th or 21st centuries had authorized during a calendar year. The federal executions included the state-sanctioned killing of a Native American against the wishes of his tribal authorities for a crime committed on tribal lands, and, for the first time in 70 years, two federal inmates were executed for crimes committed as juveniles.

Three of the people executed in 2020 raised significant claims of innocence, according to D.P.I.C. researchers. Five people were exonerated from death row in 2020, bringing the number of people released from death row since 1973 to 172.

With just a few weeks left before the new year, there have been 17 executions in the United States in 2020. That is down from 22 in 2019, despite the unprecedented run of federal executions. Just five states—Alabama, Georgia, Missouri, Tennessee and Texas—performed executions this year and only one, Texas, conducted more than one. According to the D.P.I.C., the total number of executions this year was the lowest since 1991 and the lowest number performed at the state level since 1983.

Two more states where the death penalty remains on the books, Louisiana and Utah, finished a decade without conducting an execution, joining 10 other U.S. states which likewise have ceased resorting to capital punishment. Only seven states—Arizona, California, Florida, Mississippi, Ohio, Oklahoma and Texas—imposed death sentences this year and just three—California, Florida and Texas—imposed more than one.

Two more states where the death penalty remains on the books, Louisiana and Utah, finished a decade without conducting an execution.

“At the end of the year, more states and counties had moved to end or reduce death-penalty usage, fewer new death sentences were imposed than in any prior year since capital punishment resumed in the U.S. in 1970s, and states carried out fewer executions than at any time in the past 37 years,” said Robert Dunham, D.P.I.C.’s executive director and the lead author of “The Death Penalty in 2020: Year End Report.”

“What was happening in the rest of the country showed that the [Trump] administration’s policies were not just out of step with the historical practices of previous presidents,” he added, “they were also completely out of step with today’s state practices.”

As a candidate, President-elect Joseph R. Biden Jr. said that he would support legislation to eliminate the federal death penalty “and incentivize states to follow the federal government’s example.”

Ms. Vaillancourt Murphy acknowledged that Mr. Biden was likely to reverse the Trump administration’s momentum on capital punishment but added, “It remains to be seen how that stance might translate into measurable progress toward abolition.”

“Given the tragic federal execution spree we all have witnessed this year, declaring an official moratorium on federal executions should be prioritized,” she said. “Alongside a moratorium, President-elect Biden could pursue the commutations of death sentences for all those on the federal death row or choose to work with Congress to strip capital punishment from federal law, preventing its use even under future presidencies.”

A “strong Catholic voice” on the issue could help move this second Catholic president of the United States into action, she said.

A “strong Catholic voice” could help move this second Catholic president of the United States into action to abolish the death penalty.

Ms. Vaillancourt Murphy is convinced the continuing moral indictments of capital punishment by church leaders, particularly Pope Francis, are having a significant impact on perceptions of the death penalty, emboldening “education, advocacy and prayer efforts of Catholics in the pews.”

But, she added, “Catholics still have real work to do to address lingering confusion and even misinformation surrounding the church’s position on the death penalty.”

“Given what Catholics believe about the dignity of the human person and recognizing the failures that riddle the system of capital punishment, the challenge before us is to redouble our commitment to ending death penalty once and for all,” she said. “Half of U.S. states have either already repealed capital punishment or are under current execution moratoria. It will take all of us to get death penalty abolition over the finish line.”

She argues that the growing acceptance among many Catholics of a consistent-ethic approach to a wide range of life issues, including capital punishment, “helps parishioners imagine more restorative approaches to justice that prioritize healing the harm caused, rather than outdated, retributive models that focus solely on the law that was broken and punishing the person who was guilty.”

“The deep decline in state executions was unquestionably a by-product of the pandemic, but even before the pandemic struck, the nation was on pace for the sixth straight year of near-record low sentences and executions.”

Growing public unease with capital punishment certainly contributed to its decline in 2020, but according to D.P.I.C. researchers, the coronavirus played a part as well, shutting down executions in states across the country in July, just as the federal government determined to restore capital punishment. “The deep decline in death sentences and state executions was unquestionably a by-product of the pandemic,” the survey’s authors report, “but even before the pandemic struck, the nation was on pace for the sixth straight year of near-record low sentences and executions.”

According to the report, only two states—Missouri and Texas—and the federal government continued to carry out executions after the pandemic reached the United States, and no state did so after July 8. But “ignoring public health warnings, officials in the jurisdictions that carried out executions brought together attorneys, religious advisors, media witnesses, victims’ families, and others for executions, risking virus exposure for them and for those who live and work in the prison,” D.P.I.C. researchers said. In the weeks afterward, Covid-19 outbreaks were reported in each of the facilities that conducted executions.

According to the report, racial disparities exhibited in this year’s executions remain consistent with decades-long trends, “with almost half of the defendants executed being people of color and 76 percent of the executions for the deaths of white victims.”

And executions and new death sentences in 2020 “continued to be directed at defendants and prisoners who were the most vulnerable or who had the most defective court process,” the survey found.

“Every prisoner executed in 2020 had one or more significant mental or emotional impairments (mental illness, intellectual disability, brain damage, or chronic trauma) or was under age 21 at the time of the crime for which he was executed,” D.P.I.C. researchers concluded.

Lisa Montgomery, the only woman on federal death row, is scheduled for execution on Jan. 12, just days before Mr. Biden’s inauguration. She would be the first woman executed by the federal government in 60 years.

Ms. Montgomery was convicted in 2007 of the murder of a pregnant woman and the horrific extraction and kidnapping of her in-utero child. Her execution was delayed after her attorneys contracted Covid-19. They have urged clemency for Ms. Montgomery, arguing that a history of profound abuse as a child and severe mental illness make her ineligible for the death penalty.