William Barr, a Catholic, went out of his way to use the death penalty (and defy church teaching) 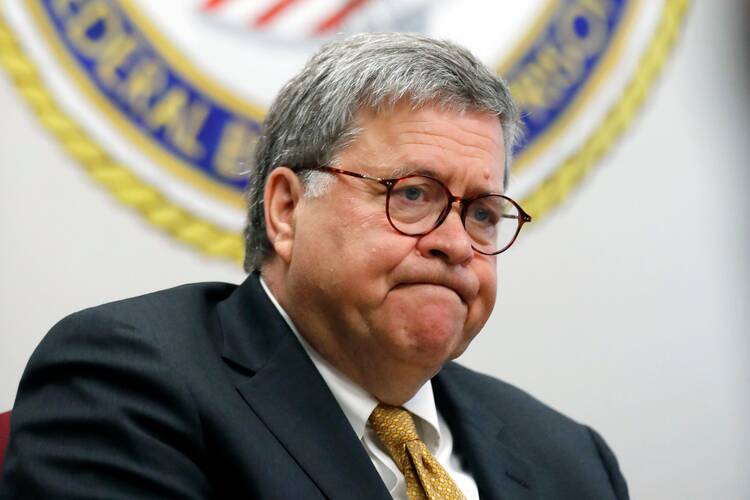 Attorney General William Barr speaks during a tour of a federal prison in Edgefield, S.C, on July 8, 2019. The Justice Department says it will carry out executions of federal death row inmates for the first time since 2003. The announcement Thursday says five inmates will be executed starting in December. (AP Photo/John Bazemore)

(RNS) — In July of 2019, five months after securing his second stint as U.S. Attorney General, William Barr instructed the Bureau of Prisons to resume executing prisoners sentenced to death in federal court.

The last previous non-military federal execution had been in 2003, and before then, only two others (in 2001) had taken place in 40 years. Since the resumption began five months ago, the United States government has executed 10 people. Three more executions are scheduled before President Trump leaves office Jan. 20.

While President Trump is notorious for advocating the death penalty in certain situations, he did not put capital punishment on his agenda as presidential candidate or president. There’s every reason to believe that the agenda was Barr’s own.

It’s hard to see Barr as doing anything but consciously, defiantly thumbing his nose at Catholic teaching.

“The death penalty has an important role to play in deterring and punishing the most heinous violent crimes ... Beyond its deterrent value, the death penalty serves to permanently incapacitate extremely violent offenders who cannot be controlled even in an institutional setting. Finally, the death penalty serves the important societal goal of just retribution. It reaffirms society’s moral outrage at the wanton destruction of innocent human life and assures the family and other survivors of murder victims that society takes their loss seriously.”

Barr issued his recommendations at a time when national panic over violent crime was leading to mandatory minimum sentences; three-strikes-, two-strikes-, and one-strike-and-you’re-out laws, victim impact statements and, yes, additional capital crimes. Over the past quarter century, support for such measures — including the death penalty — has waned for lawmakers and the public alike.

At the very time Barr’s country was ratcheting up its support for the death penalty, his church was dialing it back.

But not, it seems, for Bill Barr, even though, in explaining his July 2019 order, he left out the rationales of deterrence, incapacitation, just retribution and moral outrage. “The Justice Department upholds the rule of law — and we owe it to the victims and their families to carry forward the sentence imposed by our justice system,” he said.

Which brings up his standing in public life as a Catholic — the kind who last year denounced threats to religious liberty and lamented the decline of national morals in a speech at Notre Dame, the kind who this year received the National Catholic Prayer Breakfast’s Christifideles Laici (Christ’s Lay Faithful) Award.

[Related: In 2020, the Trump administration executed more prisoners than all states combined]

At the very time Barr’s country was ratcheting up its support for the death penalty, his church was dialing it back.

In his 1995 encyclical Evangelium Vitae (the Gospel of Life), Pope John Paul II declared the death penalty had to be “viewed in the context of a system of penal justice ever more in line with human dignity and thus, in the end, with God’s plan for man and society.” In this respect, it was like slavery, which the church had once acquiesced in, but which the encyclical (quoting the Second Vatican Council) also rejected as an insult to human dignity.

An offender should therefore not be executed “except in cases of absolute necessity: in other words, when it would not be possible otherwise to defend society.” In 1997, the church’s catechism was updated to express the encyclical’s position.

This presented a challenge to U.S. Catholic officials — or at least to those officials who took the new teaching seriously.

Thus, in a 1998 co-authored article in the Marquette Law Review, Amy Coney Barrett held that because Catholic judges were both “obliged by oath, professional commitment, and the demands of citizenship to enforce the death penalty” and “obliged to adhere to their church’s teaching on moral matters,” they should recuse themselves from presiding over death penalty trials. (Judging death penalty appeals, she has subsequently indicated by word and deed, is another matter.)

Under Pope Francis, John Paul’s death penalty démarche has gone a ways further. In a letter to the International Committee Against the Death Penalty in 2015, Francis called the death penalty “inadmissible, no matter how serious the crime committed,” writing that it “contradicts God’s plan for man and society” and “does not render justice to the victims, but rather fosters vengeance.”

In 2018, the catechism was revised to declare the death penalty “inadmissible because it is an attack on the inviolability and dignity of the person.” The revision concluded by stating that the church “works with determination for its abolition worldwide.”

Under the circumstances, it’s hard to see Barr as doing anything but consciously, defiantly thumbing his nose at Catholic teaching.

Think of it this way. Since Lyndon Johnson assumed the presidency, no administration, Republican or Democratic, with the exception of George W. Bush’s, has felt obliged to carry out a non-military federal death sentence. By leaving well enough alone, Barr would neither have violated his oath of office nor his church’s moral teachings.

Abortion may be an older and more serious offense in Catholic moral theology, but what he’s done is the functional equivalent of going out of his way to require women to abort their fetuses. He leaves office with the blood of 10 people on his hands, and three yet to come.

Mark Silk - Religion News Service
Show Comments ()
Join the conversation: Login or create an account
Before you can comment, you need to update your profile to include your first and last name, as required in our comments policy. Then reload this page and you'll be set up for commenting. Update your profile