With Congress in turmoil, Catholic charities mobilize to respond to Covid-19 hunger crisis

With Congress in turmoil, Catholic charities mobilize to respond to Covid-19 hunger crisis 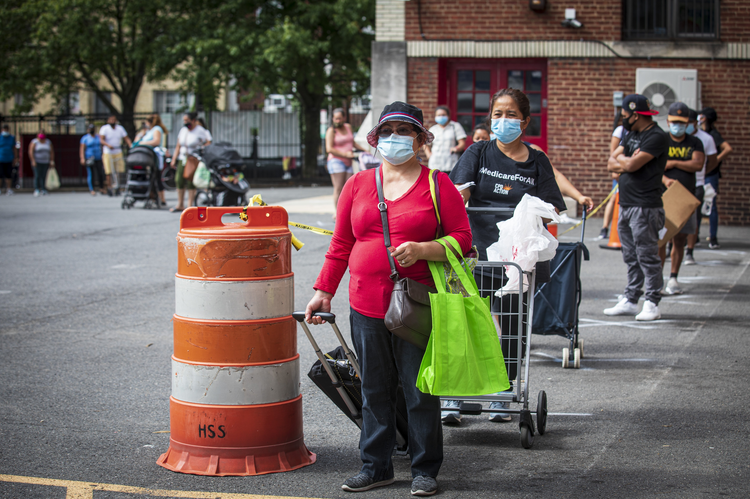 A woman waits in line at Catholic Charities' Spanish Catholic Center parking lot in Washington July 15, 2020, to pick up free food supplies. Since the start of the coronavirus pandemic in March, Catholic Charities of the Archdiocese of Washington has served hundreds of thousands of meals to people in need across all of its food programs. (CNS photo/Chaz Muth)

The Croton-Cortlandt Food Pantry, hosted at Holy Name of Mary Church in Croton, N.Y., had adapted its distribution scheme to match the times. In the days before the coronavirus, the pantry’s offerings were laid out like a small neighborhood grocery; its weekly clients were free to pick out the food items they wanted.

But with a contact-limiting redesign in place in December, the pantry’s clients waited inside their cars in a rumbling line that snaked across a municipal parking lot up to a small tent set up just outside the back doors of the parish center. Volunteers huddled under the tent against a cold rain, waiting to run bags of groceries into open trunks, as contact-free as possible. The car-queue stretched along the perimeter of the small lot and out onto one of Croton’s main roads. A volunteer periodically ran out to make sure the food line was not snarling town traffic too badly.

From small-town traffic jams outside church food pantries to scenes of cars backed up for miles outside food distribution sites, a global hunger crisis is being realized.

The pantry was open just a few hours on this Saturday morning, and the thread of cars rarely let up as volunteers moved in quick rounds between tent and trunk. As closing time approached, some of the pre-packaged goods and perishables were running low. Late arrivers sensed that supplies were growing strained.

“Please,” one man whispered after he was informed that each household could receive only two grocery bags. “My brother just lost his job too. Can you give me as much as you can?” The volunteer told him he surely would.

From small-town traffic jams like this one outside a small Westchester County church to unprecedented scenes of cars backed up for miles outside food distribution sites in big cities like Houston and Pittsburgh, a global hunger crisis, foretold in the beginning days of the Covid-19 crisis, is being realized.

More than 27 million U.S. adults reported that their households did not have enough food for at least some of the time, according to the most recent U.S. Census Bureau Household Pulse Survey. This marked a 30 percent increase from late February and early March, just before the pandemic hit, when 19.7 million adults reported difficulty in obtaining enough food for their households some or much of the time. The lines of hungry families are similarly growing longer all over the world.

Coronavirus vaccines that will be distributed across the country over the winter and spring offer a glimmer of hope for an end to the crisis, but since the pandemic began, more than 10 million jobs in the United States have been lost and millions more remain endangered as states grapple with the possibility of additional civic lockdowns to suppress new Covid outbreaks.

“Please,” one man whispered. “My brother just lost his job too. Can you give me as much as you can?”

The unemployment rate in the United States peaked at almost 15 percent at the beginning of the pandemic as lockdowns were initiated across the country last spring. The rate has since settled to just under 7 percent, double the 3.5 percent unemployment from just before the coronavirus surfaced in the United States. The most significant job losses have been concentrated in communities that were already among the most economically vulnerable.

Globally, the United Nations’ International Labor Organization estimates that the pandemic obliterated the equivalent of almost 200 million jobs at the same time its disruptions of production and distribution systems drove up food costs.

“Food insecurity was serious before the pandemic but has really worsened, largely to job loss,” Jane Stenson, Vice President for Food and Nutrition and Poverty Reduction Strategies at Catholic Charities USA, told America by email. “Most of our agencies have reported anywhere from 50 to 300 percent increases in requests for food support.”

Catholic Charities offices across the country report encounters with individuals who are using food banks and pantries for the first time. That may reflect many vulnerable households tapping into food networks and other nutrition programs so they can redirect their monthly budget to rents and mortgages.

“Visiting a food pantry can help keep a family housed, which is so important at any time but particularly during the winter,” Ms. Stenson said.

Covid-related food insecurity is, of course, not limited to the United States. Longer lines for food relief are also familiar sights in Uganda and other East African nations.

Catholic Charities offices across the country report encounters with individuals who are using food banks and pantries for the first time.

Paula Aguirregabiria, the communications officer of Jesuit Refugee Service for Kenya and East Africa, reports that pandemic-related job losses and other income cuts, in addition to a lack of government assistance, have led to a huge increase in the number of new beneficiaries coming to JRS for emergency assistance. “The amount has been so significant we have been unable, in many cases, to assist all the needy individuals,” she said.

Adding to the region’s misery, East Africa has been afflicted by locust swarms that are devouring farmland. Catholic Relief Services reports that 2.5 million people require emergency assistance in Ethiopia, Kenya and Somalia. According to a C.R.S. assessment, “thousands of farming families need food and income at a time when Covid‑19 lockdowns prevent them from seeking alternative work.”

In Cusco, Peru, where the crucial tourism industry has been obliterated by the pandemic, lines of tourists waiting for transport to Machu Picchu were replaced by local residents waiting to pick up sacks of food basics or hot meals. Church leaders in Peru say hunger and related problems, like child anemia, are on the upswing and they are responding by opening soup kitchens.

Ten months into the Covid-19 crisis, dire warnings about hunger issued by the U.N. World Food Program have been exceeded. According to a November situation report, 272 million people in 79 countries are “acutely food insecure” because of the impact of the protracted pandemic in areas already affected by conflict, socioeconomic downturns, natural hazards, climate change and agricultural pests. That figure is about two million higher than the worst-case scenario the agency projected in March.

Over the first three quarters of 2020, W.F.P. provided food assistance to 69 million people, eight million more than it reached in all of 2019. The food program reports that the hunger crisis is likely to continue into the new year, noting that because of Covid-19, both 2020 and 2021 are expected to be “economic lost years.”

Ten months into the Covid-19 crisis, dire warnings about hunger issued by the U.N. World Food Program have been exceeded.

The World Bank estimates that an additional 150 million people will fall into extreme poverty next year because of the pandemic; poorer countries and vulnerable households will be “disproportionately affected.” Economic fallout from the pandemic has set back decades of progress against the most severe forms of malnutrition and is likely to kill 168,000 children before any global recovery takes hold, according to a study released on Dec. 14 by 30 international organizations.

The study, from the Standing Together for Nutrition Consortium, draws on economic and nutrition data gathered this year as well as targeted phone surveys. Saskia Osendarp, who led the research, estimates an additional 11.9 million children—most in South Asia and sub-Saharan Africa—will suffer from stunting and wasting, the most severe forms of malnutrition.

Women who are pregnant now “will deliver children who are already malnourished at birth, and these children are disadvantaged from the very start,” said Ms. Osendarp, the executive director of the Micronutrient Forum. “An entire generation is at stake.”

The fight against malnutrition had been an unheralded global success until the coronavirus pandemic struck.

“It may seem like it’s a problem that is always with us but the numbers were going down prior to Covid,” said Lawrence Haddad, the executive director of the Global Alliance for Improved Nutrition. “Ten years of progress eliminated in nine to 10 months.”

In the United States, Catholic Charities USA’s anti-hunger efforts include helping people understand their eligibility for federal nutrition support—something many of those out of work for the first time may not realize. Ms. Stenson added that many undocumented residents whose U.S.-born children are eligible for nutrition programs have shied away from government support because of recent changes to immigration regulations that mean even a single request for public assistance could jeopardize a citizenship or residency application.

“We would encourage anyone questioning their ability to apply for [the Supplemental Nutrition Assistance Program] to check out their state’s SNAP benefit. If they are eligible, it can be a significant lifeline,” Ms. Stenson said.

But another essential federal lifeline, the U.S. Department of Agriculture’s Farmers to Families food box program, is scheduled to end on Dec. 31, cutting off a low-cost supply of fresh produce and dairy. Local Catholic Charities’ agencies are dependent on food donations or reduced price purchasing from food banks, according to Ms. Stenson, but have also responded to demand with retail purchases. “The increased need has put a real strain on agency budgets,” she said.

A federal stimulus package that included renewed support for U.S. families now faces an uncertain future in Washington after last-minute demands by the Trump administration to trim some parts of the package while adding more money to family relief. Catholic Charities USA’s agencies will continue to try to fill the gaps in monthly budgets for some families but, Ms. Stenson said, that top-level support from the federal government remains essential.

Without quick action, Covid-19 will create a global hunger crisis by the end of 2020
Kevin Clarke

Donna Markham, O.P., president and C.E.O. of Catholic Charities USA, expressed her concern about the long-term impact of the Covid-19 pandemic in a statement released on Dec. 21. “As we have been saying since March, the ability for nonprofits such as Catholic Charities to provide the most basic of needs to the staggering number of individuals and families is not sustainable without federal assistance.

“We will be calling on Congress,” Sister Markham said, “to return to work in January to provide lasting support to those who are sick, unemployed, hungry, threatened with eviction and suffer other consequences from this horrible pandemic.”

With reporting from Catholic News Service and The Associated Press