Former Jerusalem archbishop: How long will Catholics keep ignoring the suffering of Palestinians? 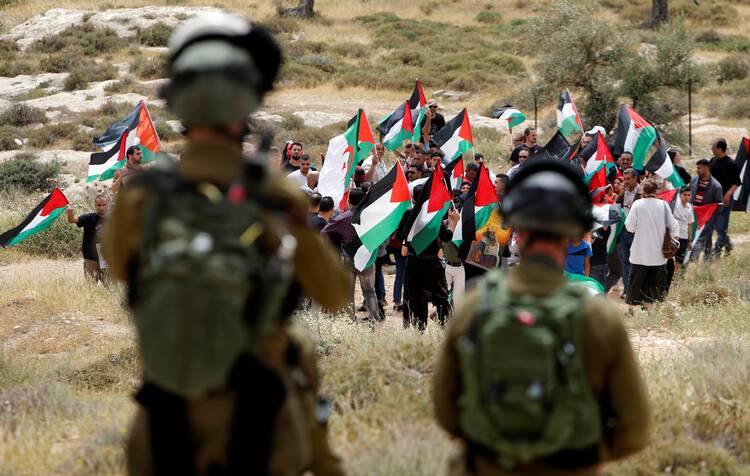 Israeli soldiers in Bethlehem stand guard on May 10, 2018, as Palestinians demonstrate ahead of Israeli Independence Day. (CNS photo/Mussa Qawasma, Reuters)

Israel’s military occupation of Palestine continues in its 53rd year. In particular, Palestinians in Gaza are suffering under a callous siege. The U.S. administration has withdrawn aid for Palestinian hospitals in East Jerusalem and for the United Nations’ humanitarian work in the occupied Palestinian territory.

President Trump’s so-called peace proposal is little more than a justification for the occupation and a false promise of prosperity to Palestinians at the cost of their freedom and independence. In spite of promises to the contrary in recent peace deals with the United Arab Emirates and Bahrain, Israel’s annexation of Palestinian land and resources continues with the recent approval of 3,000 new settlement homes in the West Bank.

Palestinian Christians join the Hebrew prophet Habakkuk in his cry for justice:

It is a question of humanity in the Holy Land. Human beings continue to kill or be killed. The power of the stronger, not the power of God, continues to prevail. Moreover, in regarding the state of Israel as a fulfillment of biblical prophecy, Christian Zionists believe that Israel should receive special status, thereby using the word of God to support policies and practices that privilege one people over another—with deadly consequences.

It is a question of humanity in the Holy Land. The power of the stronger, not the power of God, continues to prevail.

We say that the word of God is a word of life for all. Our God is one of love, not war. God’s word, even spoken in the midst of the conflict, must lead all of us to respect one another as equally created—Israelis and Palestinians having equal rights, freedom and independence.

So we turn to the media, the global Catholic Church and civil society asking, “Will you help?” Can you help both Israelis and Palestinians achieve a just, definitive peace? Or will you keep looking with indifference toward the Holy Land, a land in which one people continues to oppress another people, resulting in continued bloodshed and hatred?

To again quote Habakkuk: “Destruction and violence are before us. The law has become slack and justice does not prevail.”

In 2009, Palestinian Christians from diverse churches, institutions and walks of life called for an end to the Israeli occupation. We at Kairos Palestine issued the document “A Moment of Truth: A Word of Faith, Hope and Love From the Heart of Palestinian Suffering.” This Christian Palestinian cry, a bold theological document grounded in the Scriptures, was welcomed by some but misunderstood and rejected by others. The heart of the document is an invitation for Christians to join Palestinians in their nonviolent resistance shaped by the “logic of love.”

Many have been led to believe a false narrative that the source of trouble is a religious conflict between Muslims and Jews.

Sadly, this document and further pleas did not achieve the kind of solidarity we expected from our sisters and brothers in U.S. churches.

We realize that many have been led to believe a false narrative that the source of trouble is a religious conflict between Muslims and Jews. We say: The heart of the unrest is a prolonged military occupation that abuses human rights and has been declared illegal under international law.

[Related: The expansion of a ‘biblical theme park’ in Jerusalem is another sign of disregard for Palestinians]

Some Western European and North American churches are hesitant to act boldly for fear of being charged as anti-Semitic. We say: Speak as Christians, behave as Christians, concerned with what happens in your Holy Land, to save all of us, and perhaps yourself.

Other church leaders, desiring to be “balanced” in their views, seek to put the victims and the perpetrators on an equal footing. We say: Look at us both as we are—the one, oppressor; the other, oppressed. Help us both to achieve peace and justice in our land, the land of God.

Earlier this year, representatives from 20 countries across five continents joined Palestinian Christians to issue “Cry for Hope: A Call for Decisive Action.” This document has been translated into 13 languages and endorsed by more than 350 Christian leaders, scholars and organizations around the world, and it has been signed by more than 12,400 individuals and churches.

We have made this call out of concern for the future of the people in the Holy Land and beyond—people of every faith and of no expressed faith at all. As we wrote of both Israelis and Palestinians in “A Moment of Truth”: “Our future and their future are one.” Together, we face “either the cycle of violence that destroys both of us or peace that will benefit both.”

In Palestine, as in Israel, there are human beings who wait to be saved from the evil that now prevails. Those who kill need to be healed. Those who are oppressed and threatened with death need to be healed. Our common healing is in the prayers and actions of the church and civil society, acting toward a just and lasting peace that restores dignity, freedom and security to all.

As we declared in “A Moment of Truth,” we believe in God, good and just. We believe that God’s goodness will finally triumph over the evil of hate and of death that still persist in our land. We will see here “a new land” and “a new human being,” capable of rising up in the spirit to love each one of his or her brothers and sisters. 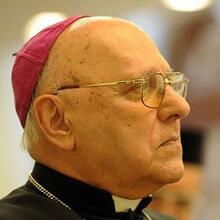