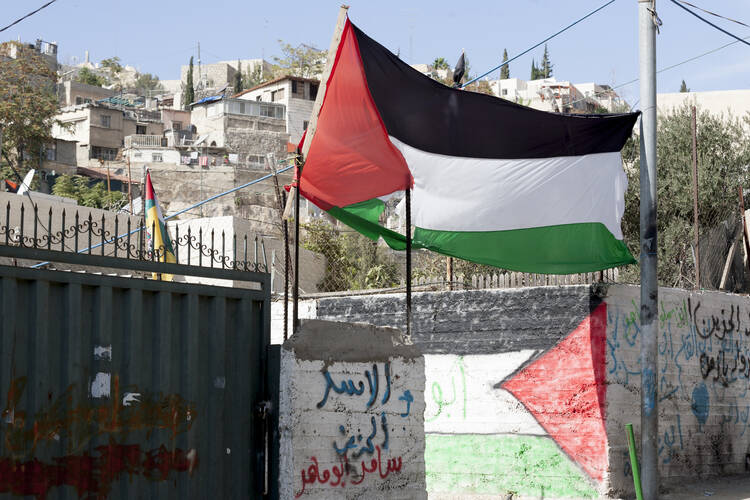 A Palestinian flag in Silwan, one of the few neighborhoods in East Jerusalem were large numbers of Palestinians still reside. (iStock/DZarzycka)

Residents of Wadi Hilweh, a Palestinian neighborhood in the East Jerusalem community of Silwan, awake in the middle of the night to a shaking of their homes and, from below, the sounds of heavy equipment. Wadi Hilweh sits just outside the walls of Jerusalem’s Old City, below the Dung Gate, and it is ground zero for the state of Israel’s ongoing work to expand the reach of its City of David National Park.

The park is one of the country’s most important archeological sites, drawing hundreds of thousands of visitors each year.

Plans for the park’s expansion call for a cable car; a seven-story Jewish cultural center on land where Wadi Hilweh families used to gather; and, in the valley below, homes for settlers and shopping for tourists in the restored area referred to in the Bible as the King’s Garden (Nehemiah 3:15). A biblical theme park, critics charge. All on Israeli-occupied territory, run by settlers.

Israel has never consulted Palestinian residents, many of whose families have lived here for generations, about the excavation work, which has transformed their community.

Israel has never consulted Palestinian residents, many of whose families have lived here for generations, about the excavation work which, for more than 10 years, has transformed their community. Arabic street names have been changed to Hebrew, a parking lot on Wadi Hilweh Road caved in because of the excavation work in 2019, and many homes have been destroyed or damaged.

It wasn't until the parking lot caved in that locals were able to look into the hole below and discover what the state had been excavating for many years without disclosing to residents: a first-century “Pilgrim’s Path” leading from the Pool of Siloam up to the Old City, directly beneath the homes of Wadi Hilweh. The Jerusalem municipality repaired the road but refused to compensate residents for the damage to their homes. For a decade now, the excavation has continued day and night, and residents are being given no information about the next steps or when the work will be completed.

The tunnel work is being undertaken by Israel’s most influential settler group, the Elad Foundation. According to an article in the Israeli daily newspaper Haaretz, Elad “operates in East Jerusalem with two main foci: settling Jews in the largely Arab Silwan neighborhood and running tourist and excavation sites.” Elad and Israel’s Antiquities Authority claim that this area is the site of the Jebusite fortress conquered by King David 3,000 years ago and is therefore a Jewish site to be developed by Israel and surrounded by Jewish neighborhoods.

However, the finding “is highly contested within the archeological community,” according to a report by Emek Shaveh, an Israeli non-government agency working “to defend cultural heritage rights and to protect ancient sites as public assets that belong to members of all communities, faiths and peoples.” Its report states that most Israeli archeologists disagree with Elad and that little has been published in scientific publications. The report also notes that “the fact that an antiquities site within a national park is run by a highly ideological private organization is without precedent in the country.”

Arabic street names have been changed to Hebrew, a section of Wadi Hilweh Road has collapsed, and several homes have been destroyed or damaged.

Talya Ezrahi, the international outreach coordinator for Emek Shaveh, told me that other excavations undertaken by the Antiquities Authority and funded by Elad meet accepted archeological practices. But the Pilgrim’s Path work is “an unprofessional excavation undertaken as a highly political move,” she said. “Standards and best practices have been sacrificed.”

Archeological remains in the area span 7,000 years, with Jerusalem having been inhabited by Canaanites, Assyrians, Babylonians, Persians, Greek, Romans and Byzantines. But Ms. Ezrahi pointed out that announcements about finds from various digs in the City of David are overwhelmingly focused on those associated with the First and Second Temple periods. This attracts Jewish and Christian pilgrims without acknowledging the cultural heritage of other civilizations.

“I grew up in Jerusalem,” Ms. Ezrahi said. “I watched how, gradually, the historical core of the city became a tool to deepen the [Israeli] occupation.”

“It makes me very sad,” she continued. “Many peoples and cultures contributed to what the city is. All sacrificed for a political goal.”

“Many peoples and cultures contributed to what the city is. All sacrificed for a political goal.”

East Jerusalem, a part of the West Bank, was occupied in 1967 and formally annexed in 1980 when Israel passed a law declaring “Jerusalem in its entirety is the capital of Israel.” The international community has never recognized Israel’s annexation, and in a 2016 Security Council resolution, the United Nations declared the expansion of settlements a “flagrant violation of international law.” But successive Israeli governments have sought to ensure a Jewish majority in the entire city, West and East, by transferring Jewish settlers into occupied East Jerusalem.

In the early 1990s, Israeli settlers from the Elad Foundation started taking over Palestinian homes throughout Silwan, settling Jewish families in their place. Elad and other settler organizations orchestrated evictions that have been carried out with the approval of Israeli courts and enforced by Jerusalem’s police; often when Palestinians have resisted, settlers have become violent.

Daniel Seidemann, founder of Terrestrial Jerusalem, is a legal expert on issues related to Jerusalem. He said, “There’s a political purpose to the excavations,” and this is “evidenced by the lack of both architectural ethics and coordination with people living in the area.” Mr. Seidemann acknowledged the archeological evidence that points to the roots of biblical Jerusalem in the eighth century B.C.E. “But,” he maintained, “historical facts don’t allow moral and political suppression of a people. They are being used as a pretext to displace Palestinians.”

The international community has never recognized Israel’s annexation of the West Bank, and the United Nations declared the expansion of settlements a “flagrant violation of international law.”

“This is one of the places where manifestations of policies reminiscent of apartheid hit you over the head,” Mr. Seidemann said.

Zakaria Odeh, executive director of the Civic Coalition for Palestinian Rights, a Palestinian NGO in Jerusalem, agreed. “Israel behaves as if it is above international law and the conventions of human rights,” he said. Pointing to the growing population of Jews in occupied East Jerusalem—around 200,000 now—Mr. Odeh said that “Palestinians expect the international community to raise their voices to stop the continuing systemic injustices and violations and crimes against our people.”

Regarding the ongoing excavations of the underground Pilgrim’s Path, “We want to work with local authorities, the municipality, the police,” said Sahar, a Wadi Hilweh resident. “But the whole process is very confidential. Palestinians are employed on other excavations, but no one from our village works on this project.”

“Everyone has a right to look for their history,” she added. “But why are we not included in the planning?”

Sahar, who declined to share her last name, works for a Palestinian community center. Seven generations of her family have lived in Wadi Hilweh. “We want what every parent wants: a safe place for our children to grow up, to learn and play, to laugh and dance,” she said. “We want them to enjoy their childhood, not to carry psycho-social wounds from settler and police violence.”

“Still,” she said, “we strongly believe that we are owners of these houses, this land. We have hope. We won’t give up. We have no intention to move. We resist by our existence.”

“Look for your history,” Sahar said, addressing Israeli Jews, “but don’t ignore the people living now, above the ground.” 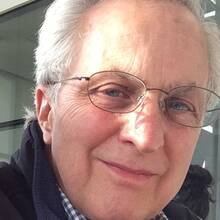 Jeff Wright is a pastor in the Christian Church (Disciples of Christ), appointed by the denomination to serve as a volunteer with Kairos Palestine, led by H.B. Michel Sabbah, Latin Patriarch Emeritus of Jerusalem.