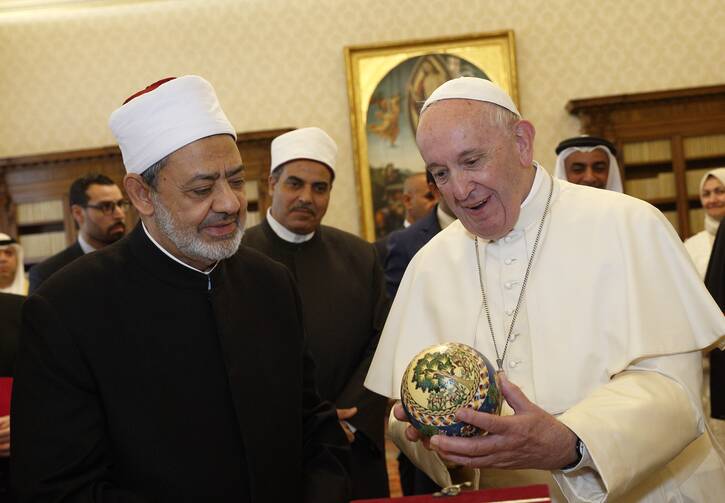 The United Nations General Assembly decided unanimously that Feb. 4 be observed each year as the International Day of Human Fraternity, starting in 2021. It invited member states, the U.N. system and others to observe the date in a manner each would consider appropriate.

It was on Feb. 4, 2019, that Pope Francis and the grand imam of Al Azhar, Sheikh Ahmed al-Tayeb, signed the historic “Document on Human Fraternity” in Abu Dhabi. The General Assembly’s resolution specifically refers to that significant event in Christian-Muslim relations as the inspiration for the date.

“Today marks a great historic achievement in the history of humanity,” Judge Mohamed Mahmoud Abdel Salam told America. Mr. Salam is the secretary general of the Higher Committee for Human Fraternity, the group that spearheaded the initiative. The judge also made history in October 2020 when he became the first Muslim to present a papal encyclical, “Fratelli Tutti,” at the Vatican.

“This signifies the international acknowledgment of the joint efforts of the grand imam and Pope Francis in fostering interfaith and intercultural dialogue.”

“This signifies the international acknowledgment of the joint efforts of the Grand Imam of Al Azhar and Pope Francis in fostering interfaith and intercultural dialogue,” Mr. Salam said.

He said the committee’s members met with U.N. Secretary General António Guterres in December 2019, and the judge handed him a letter containing the proposal for the internationally recognized day. But since the committee could not present the proposal to the assembly—only a member state can do that—it asked the United Arab Emirates to present it and coordinated its effort with the U.A.E. to gain the necessary support from U.N. member states.

[Related: What Pope Francis’ friendship with the Grand Imam of al-Azhar means for Muslim-Christian relations]

The request to declare this international day was presented to the General Assembly on Dec. 21 by the U.A.E. on behalf of 34 countries, including Bahrain, Egypt and Saudi Arabia.

Speaking on Dec. 21, Lana Nusseibeh, the ambassador and permanent representative of the U.A.E. to the United Nations, on behalf of the supporting countries, told the U.N. General Assembly that the international community is deeply concerned that in recent years there has been “a dramatic increase in violence, hate speech, xenophobia, religious bigotry and other forms of discrimination.”

“In the face of such transnational threats,” she said, “we need to support initiatives that encourage solidarity and unity among people in the spirit of ‘human fraternity.’”

She underlined the importance of interreligious dialogue and that the resolution approved by the U.N. General Assembly recognizes the valuable contributions of people of all religions and beliefs to humanity. It also emphasizes the important role of education in promoting tolerance and eliminating discrimination based on religion or belief. It commends all international, regional, national and local initiatives by religious leaders to promote interreligious and intercultural dialogue.

The resolution gained the support of the 27 member states of the European Union as well of the United States and was approved unanimously.

The resolution gained the support of the 27 member states of the European Union as well of the United States and was approved unanimously.

The Higher Committee for Human Fraternity includes five Muslims and two Catholics—Cardinal Miguel Ayuso, the president of the Pontifical Council for Interreligious Dialogue, and Pope Francis’ former private secretary, Monsignor Yoannis Lahzi Gaid, a Coptic Catholic priest. Other members include the secretary general of the World Council of Churches, a Jewish rabbi and a former secretary general of Unesco.

Speaking to America, Mr. Salam emphasized the importance of the personal friendship that has developed over these years between Pope Francis and the grand imam of Al Azhar for good relations between Muslims and Christians and for peace in the world. He drew attention to the fact that the leaders had spoken together by phone for over 20 minutes on Nov. 19, and the following day reaffirmed on Twitter their support for “human fraternity as the solution to erase violence, discrimination and hatred in the name of religion.”

He said the approval of this International Day of Human Fraternity by the United Nations is an important result of that friendship.