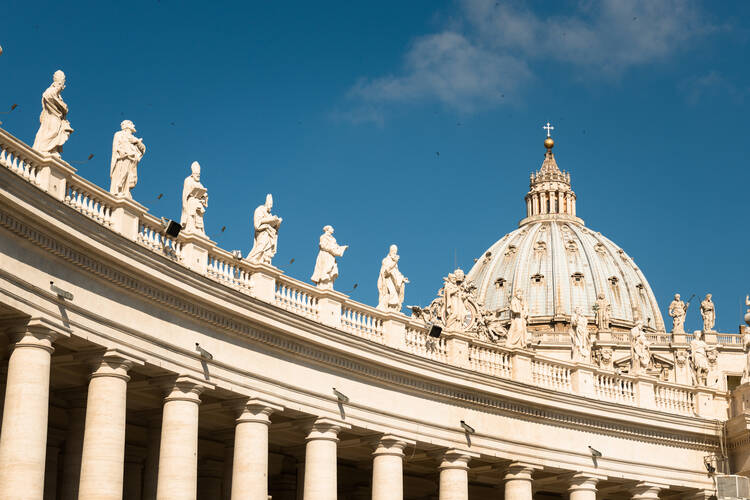 Two cardinals who work closely with Pope Francis have contracted Covid-19. Cardinal Konrad Krajewski, 57, the pope’s almoner and his main contact with the poor and needy in Rome and elsewhere, and Cardinal Giuseppe Bertello, 78, the president of the Pontifical Commission for Vatican City State and president of the Governorate of Vatican City State, have both tested positive for the coronavirus.

Adnkronos, an Italian news agency, which first broke the news about Cardinal Krajewski, reports that he tested positive in the Vatican Health and Hygiene Unit, has symptoms of pneumonia and was transferred to the Gemelli Hospital, where he is now. The Vatican has confirmed the story. Both cardinals were absent from the audience of Pope Francis with the Roman Curia this morning, a Vatican official who was present told America.

The Vatican health authority is making contact with Vatican employees and others with whom the two cardinals had been in contact in recent days. They both work very closely with Pope Francis, and Cardinal Krajewski was seen speaking to him at length last Friday, according to Il Messagero, a Rome daily. The paper also first reported that Cardinal Bertello has tested positive for Covid. America has received independent confirmation of this from a Vatican source.

Dr. Andrea Arcangeli, the head of the Vatican office for Hygiene and Health, announced last week that the Vatican plans to vaccinate its employees and the citizens of the city-state, as well as the families of lay employees. America understands that this will be in mid-January.

Cardinal Luis Antonio Tagle was the first head of a Vatican office to test positive for Covid, he tested positive on arrival in Manila as America reported at the time. Other Vatican employees, both clerical and lay, and 14 Swiss Guards, also tested positive but all are now cured.