In ‘Fratelli Tutti,’ Pope Francis identifies the paradox of populism 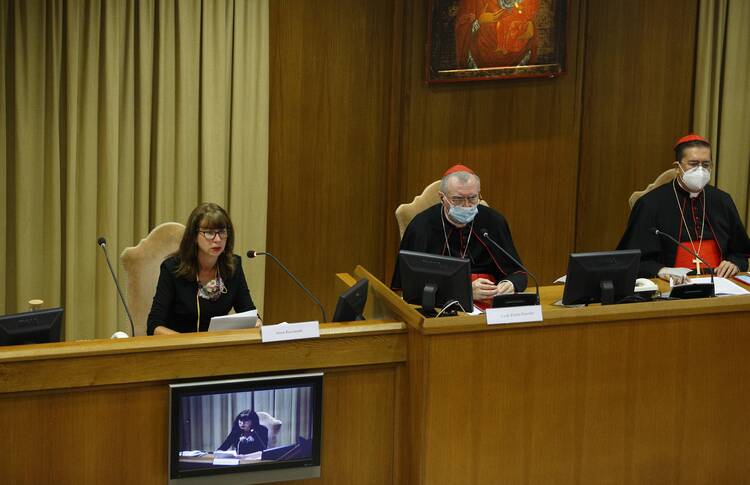 Anna Rowlands, professor of Catholic social thought and practice at the University of Durham, speaks at a press conference for the release of Pope Francis' new encyclical, "Fratelli Tutti," in the synod hall at the Vatican on Oct. 4, 2020. Also pictured are Cardinal Pietro Parolin, Vatican secretary of state, and Cardinal Miguel Angel Ayuso Guixot, president of the Pontifical Council for Interreligious Dialogue. (CNS photo/Paul Haring)

Pope Francis offers “an extraordinary example of thought leadership” in the encyclical “Fratelli Tutti,” “and the world is hungry for it.” So said Dr. Anna Rowlands, St. Hilda Associate Professor of Catholic Social Thought at Durham University in the United Kingdom, in an interview with America last Sunday.

She welcomed the encyclical and noted that it comes at a time “where there is a total lack of reflective space, as well as a real sense of despair on many sides, and an absence of social imagination about what might come next.” She praised Pope Francis for offering it to the world in the midst of the profoundly disorienting global situation marked by the pandemic: “Yet again he has offered thought leadership on a global stage.”

Dr. Rowlands was the only woman among five panelists who presented the encyclical in the Vatican’s synod hall on Oct. 4, the feast of St. Francis of Assisi. The other panelists were Cardinal Pietro Parolin, Vatican secretary of state; Cardinal Miguel Angel Ayuso Guixot, president of the Pontifical Council for Interreligious Dialogue; Judge Mohamed Mahmoud Abdel Salam, a Muslim and secretary general of the Higher Committee for Human Fraternity; and Andrea Riccardi, founder of the Sant’Egidio community.

She believes the document “will be received outside the Catholic world with as great an eagerness, and perhaps more so, than it will be in some quarters of the Catholic world.” She described the encyclical as “a profoundly philosophical document” and said, “I think one of the things that is not yet fully understood about Pope Francis is the depth of his capacity for intellectual thought and intellectual leadership.”

Dr. Anna Rowlands: “I think one of the things that is not yet fully understood about Pope Francis is the depth of his capacity for intellectual thought and intellectual leadership.”

One sees in the encyclical that Pope Francis is “committed to really thinking through what dialogue really means and what populism is,” she said. “He gets populism. He gets what is the drive toward it and he rescues the notion of what it means to be ‘a people’ from the hands of the populists” while recognizing that there are some “who criticize him for being a populist in his own way.”

She said she was particularly impressed by the sharpness of Pope Francis’s analysis. “He drives straight to the heart of that insecurity and elusiveness and the paradox of the way in which people are driven towards populism through fear and mistrust and imagine that a closed world will offer them exactly those kinds of securities that in fact it won’t—because it is driven primarily by fear of the other.”

She called the encyclical a meditation on social aggression and social peace.

“I think what he’s asking for is for us to move away from all forms of culture that involve domination or social aggression,” she said, “into something that is built on the culture of encounter, and we have to do this across the board as a way to build social peace.”

Editorial: ‘Fratelli Tutti’ challenges the American way of life. Are we listening?
The Editors

But, she noted, “Pope Francis takes that first opening section, the question ‘who is my neighbor,’ and he shows how the question is in itself an ancient question.” In telling the parable, Jesus “turns the question around and says: ‘It’s not really a question about anxiously identifying who your neighbor is but it is an invitation.’ Rather, the challenge of the whole passage is how do you become a neighbor and that has a really profound spiritual message as well.”

His Ignatian spirituality “enables him to read Scripture and look at the world and say that we’re in this great abyss of this awful desolation; we have this increasing sense of anxiety, fear, cynicism,” but it also enables him to say, “This is manufactured; it’s a created form of despair, and what we need to do is to name it for the kind of desolation it is, and to find a way through to move beyond this desolation.”

She concluded, “I think he uses this Samaritan passage with that ability to discern the spirit of the age and its lostness and to offer a vision beyond that, a vision marked by hope.”