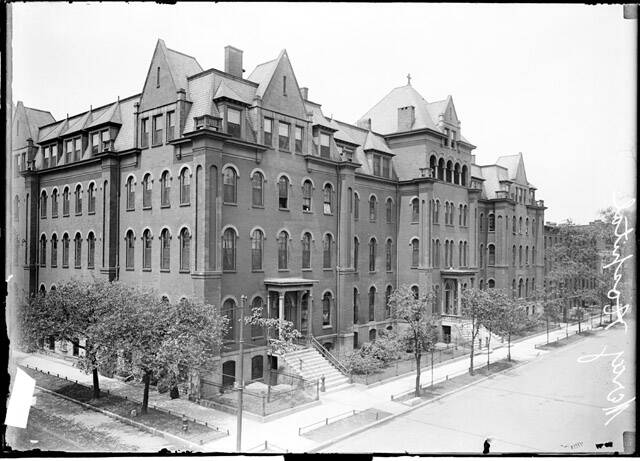 Chicago’s oldest hospital, founded by the Sisters of Mercy in 1852 and the first Catholic hospital in the nation to partner with a medical school, may soon be relegated to history. Citing years of struggling finances, changes in health care and the lack of support from government leaders, Trinity Health announced earlier this year that the 412-bed hospital located in a predominantly Black Chicago neighborhood would close early next year.

A group of neighborhood activists are trying to convince the Catholic health system that runs Mercy Hospital and state lawmakers to save the storied institution, saying that closing a hospital in an underserved community during a pandemic is unconscionable and calling its survival a matter of racial justice. On Tuesday, Dec. 16, a state commission rejected Mercy’s application to close, giving at least temporary hope to community members who want to see the institution remain open. But Mercy Hospital said in a statement it is “disappointed” by the ruling and plans to make its cases to the board “again in early 2021 with our plans to discontinue inpatient services at Mercy Hospital and transition to an outpatient model to serve residents on the south side of Chicago.”

“As an African-American male who was born here in the city of Chicago, when I see an injustice, like when a local hospital is being closed that serves the poor, elderly, people of color and people with chronic diseases, it needs to be addressed,” the Rev. Mr. Alfred Coleman told America.

Chicago’s oldest hospital, founded by the Sisters of Mercy in 1852, may soon be relegated to history.

Mr. Coleman serves as a deacon at Saint James Catholic Church in Chicago’s predominantly Black Bronzeville neighborhood, about a half-mile from Mercy Hospital. A group of parishioners there has been involved in demonstrations in recent weeks, aimed at urging a state regulatory board to reject the request from Michigan-based Trinity Health to close the hospital.

“This side of town is considered a food desert, and now it will be a health care desert. That isn’t fair,” Mr. Coleman said. “It seems to be a little bit about the money more than anything else.”

Jitu Brown, along with three of his siblings, was born at Mercy Hospital. He is head of the Kenwood Oakland Community Organization, which has coordinated some of the recent protests. He said that leaders at Trinity Health should not have allowed Mercy Hospital’s financial situation to become so bleak.

“They should have never allowed it to get to this point,” Mr. Jitu told America. “That’s when you connect with community groups, unions, and you demand at the state level that they fix the funding system so that it’s equitable and so safety-net hospitals are not always on the verge of closure.”

“This side of town is considered a food desert, and now it will be a health care desert. That isn’t fair,” Mr. Coleman said.

For its part, hospital leaders point to a proposal earlier this year that would have saved Mercy Health and built a new hospital on the South Side. But in many ways, activists say, the planned closure of Mercy Hospital is symptomatic of a health care system in the United States that favors patients with private insurance.

Mercy Hospital is considered a “safety-net hospital,” which means it serves a patient population that primarily relies on government-insurance like Medicare and Medicaid. In recent years, safety-net hospitals throughout the United States have struggled to stay afloat as wealthier patients with private insurance seek care at large, urban academic medical centers. Plus, changes in how the federal government reimburses hospitals for providing medical care to underinsured patients means tightening budgets. Safety-net hospitals in rural areas have been especially hard hit, with at least 134 closing since 2010.

At Mercy, about three-quarters of its patients use Medicare or Medicaid, which reimburses hospitals at lower rates than private insurance. Mercy Hospital lost about $84 million between 2012 and 2020. It was profitable this year, though hospital representatives said that was because of one-time government payments and that losses would continue next year.

A state board held a hearing on Dec. 15 on Mercy’s proposal to close the hospital. After four hours of deliberation, the board voted unanimously to reject Mercy’s petition to close. The hospital has two weeks to appeal the decision. Speaking at the hearing, former Illinois Gov. Pat Quinn, a Catholic, called the attempt to close Mercy Hospital “preposterous” and said it was “corporate medicine at its worst.”

At Mercy, about three-quarters of its patients use Medicare or Medicaid, which reimburses hospitals at lower rates than private insurance.

Activists blame political leaders in Illinois for the failure to keep Mercy Hospital open, as well as Trinity Health, the Michigan-based parent of Mercy that runs more than 90 hospitals in 22 states. The health system reported more than $8 billion in cash on hand earlier this year before the pandemic hit.

Should Mercy Hospital win an appeal and be able to close the hospital, activists fear the disparities in health care between the predominantly white North Side of Chicago and the predominantly Black South Side will be exacerbated. The nearest emergency department would be a few miles away from Mercy’s current campus and the loss of a trusted hospital could add to the feeling of distrust some Black Americans feel toward health care providers because of historic injustices.

Mercy Hospital tried earlier this year to stave off closing, partnering with other institutions in a last-ditch effort to convince state lawmakers to inject hundreds of millions of dollars into a new, local health system.

“Mercy has a long history in Chicago of providing compassionate care to those in need,” Mike Slubowski, the head of Trinity Health, said in a press release. “While the way in which patients receive that care might change over the years, our mission to serve the most vulnerable among us remains the same.”

“While the way in which patients receive that care might change over the years, our mission to serve the most vulnerable among us remains the same.”

Trinity Health did not reply to requests for comment.

The chief executive officer of Mercy Hospital, Carol Schneider, said in a statement in October that the planned closure and the opening of a new clinic were essential in meeting the needs of South Side residents.

“While closing the hospital is an incredibly tough decision, it is the right one, and one that will allow us to best continue our Catholic mission of providing access to health care for poor and underserved patients,” she said. “This transformation will allow us to continue this mission with the proposed outpatient center that will provide necessary services that patients on the South Side today need.”

Mercy Hospital has served Chicago for more than a century and a half. According to The Chicago Tribune, Mercy treated victims of the Great Chicago Fire, cared for President Theodore Roosevelt after he was shot in Milwaukee in 1912, was the site of the first successful separation of twins conjoined at the head and was the birthplace of countless Chicagoans, including Mayor Richard M. Daley. It was once located in a small medical district, but it remains the only neighborhood hospital as the area grew poorer.

Sister Patrica Murphy helped found a community outreach program at Mercy Hospital in the early 1970s. She said the Sisters of Mercy decided to leave the hospital walls and go out into the community to make sure the predominantly poor and elderly population who lived in nearby public housing received quality medical care at the hospital. In the first couple of years of the program, Sister Murphy said, she and other members of the team knocked on some 19,000 doors. At Christmas, she and other volunteers delivered meals to the homes of Mercy’s patients. It was a true community, she recalled.

But today, she said, it seems no one wants to pay for health care for people in need.

Sister June Anselme worked on the outreach program for 43 years, before she retired from Mercy Hospital in 2010, one of the last two Sisters of Mercy employed by the hospital. She said she recognizes the financial realities of providing care to people in need without increased government support but called it “sad” that the community will be left without a trusted hospital, especially as the United States begins the largest vaccination effort in its history.

“Where are these people going to go? I don’t know. Maybe they have a plan. Maybe they’re going to be cared for. But that area is in need,” she said.

For Mr. Brown, the community organizer, keeping Mercy Hospital open is a matter of racial justice. He said he and other residents of Chicago’s South Side are tired of fighting for basic necessities that other taxpayers take for granted, like grocery stores, well-resourced schools and hospitals. If political and civic leaders are serious about racial equity, he said, they need to step up when it comes to protecting vital institutions.

“It is inexcusable that we’ve been at this place. It is a blistering lack of leadership,” Mr. Brown said. “Because we don’t need people to say “Black lives matter” at press conferences. This is when Black lives matter, when talking about how institutions function in our communities.”