Pope Francis has endorsed a universal basic income. Covid-19 could make it a reality in Europe. 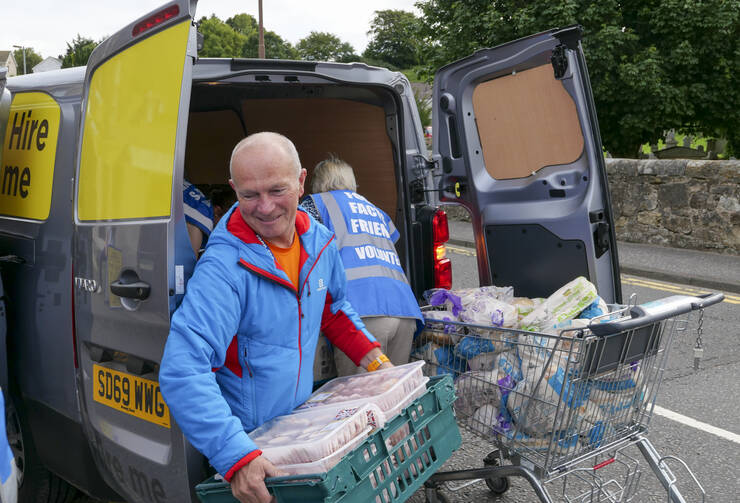 In August volunteers unload a van of food donations to a local food bank in the town of Penicuik, in Midlothian, Scotland. iStock

In 2017, British Prime Minister Theresa May, faced with demands to increase nurses’ stagnant wages, famously denied the existence of any “magic money tree.” Ms. May’s Conservative Party predecessor, Margaret Thatcher, had asserted that the U.K. government had no money of its own; only what it raised from the populace by taxation or borrowing. Most people probably thought this orthodoxy prudent. A budget deficit was a sign of bad governance, strenuously to be avoided.

As the second Covid-19 wave swept Europe so too has a burgeoning conversation about Universal Basic Income that may require a reassessment of hoary thinking on deficit spending. In Scotland, as elsewhere in the United Kingdom, the discussion is not new but it has become more prominent—indeed urgent—as the political and economic response to the pandemic turned fraught.

“Momentum behind basic income has been building for years in the U.K.,” said Michael Pugh, the co-founder and director of the London-based think-tank Basic Income Conversation. “But the pandemic has rapidly accelerated the public’s interest in the idea as gaps in the social security system have left so many people living in insecurity.”

As the second Covid-19 wave swept Europe so too has a burgeoning conversation about Universal Basic Income.

Mr. Pugh, who came to this campaign after working in community organizing, predicts that “as the health and economic impacts of the crisis continue to bite next year, we expect the calls for basic income to get louder and louder.”

The idea even got an unqualified plug from Pope Francis himself. In the recently published Let Us Dream, the pope endorsed an “unconditional lump-sum payment to all citizens” in the context of his regular calls for an economically and environmentally more equitable post-Covid world.

Francis’s version of U.B.I. suggests that it be paid for through taxation. But there are other ideas about how to fund U.B.I. in circulation.

The pandemic’s economic impact has been multifaceted; businesses have been forced to close and the economy has rapidly contracted. Existing social support arrangements were strained; consumer spending fell away. As the lockdown tightened, wages declined and businesses large and small suffered. A record-breaking 15 percent bounceback in growth during the third quarter illustrated how badly the lockdown had throttled the economy, which lurched into recession across the spring and summer.

Massive state social support became unavoidable, even during a Conservative administration whose every instinct had been to reduce the size of the state. As all kinds and sizes of businesses closed their doors, the U.K.’s Coronaavirus Job Retention Scheme saw the state match 80 percent of furloughed workers’ wages.

The program, nearly withdrawn in the autumn, was extended until March 2021 when the widely-predicted second wave of the coronavirus began, striking some months before vaccines will become viable. Many believe the effectiveness of this huge cash injection by the state makes a clear case for the universal basic income. And they’re saying so more and more confidently.

Two concurrent discussions have emerged around the universal basic income—its desirability as a matter of public policy; and concerns about how it would all be paid for.

Various proposals advanced for some form of U.B.I. in the U.K. have now even drawn mainstream politicians, moving the idea from the political fringes. In response to fears of persisting widespread unemployment because of the pandemic, a growing number of parliamentarians and local politicians have called on U.K. governments to at least try out the idea in pilot programs.

Sometimes called Citizens’ Basic Income, U.B.I. begins with a simple proposal—the state should pay each citizen an agreed income regardless of the individual’s employment status, pre-existing earnings or qualifications.

But even as U.B.I. proposals gain traction, many Britons—watching Covid-19 mitigation costs escalate—are becoming anxious about the national debt, despite rarely understanding what it really represents. Reeling from years of Tory austerity policies that followed the banking crash of 2008, many worry massive tax increases will be levied to pay for new spending in response to the pandemic.

Two concurrent discussions have emerged around the universal basic income—its desirability as a matter of public policy; and concerns about how it would all be paid for.

U.B.I. opponents speak of the dangers of a something-for-nothing dependency culture and disincentivizing work. Others contend that state borrowing has to be repaid in the same way that individuals, households and firms need to balance their monthly books in order to remain solvent and to preserve their credit-worthy reputations.

Momentum behind universal basic income “has been building for years, but the pandemic has accelerated the public’s interest as gaps in the social security system left so many people living in insecurity.”

But proponents of Modern Monetary Theory, like Stephanie Kelton, counter that sovereign states, as currency issuers, can and do create money when they need to. They point out that managing the economy of a sovereign state can’t be compared to running a household.

A currency-issuing state cannot go broke because, unlike a bank, household or individual, it has the power to issue more currency at the stroke of a keyboard for expenditure it deems essential. Deficits can encourage growth, according to the theory, which argues that balanced state budgets are not often a public service, even if they remain desirable in running a household.

A limiting risk is inflation. But the theory holds that a judicious injection of “fiat” cash into an economy will increase productivity and G.D.P., thus keeping inflation at bay. U.B.I. advocates think that this is one way their no-strings-attached payment could be financed. Others, Pope Francis among them, advocate for transfers based on levying higher taxes on those who can afford them.

In Scotland, the resurgent independence movement faces interrogation about how it will pay for public expenditure and related currency questions. The “subsidy myth,” that the northern nation depends on London’s munificence to survive and to finance welfare programs, persists.

With insufficient media scrutiny, supporters of the London Government continue to suggest that Scottish membership of the current British union of countries has meant access to massive state spending that Scotland on its own would not have the capacity to create.

Others, like political economist Richard Murphy of Sheffield University, say that when an independent Scotland retains all the taxes it raises and becomes a currency-issuer rather than a user of the U.K. pound, it could well match the funding it now receives as part of the United Kingdom.

Recent polling in Scotland has shown consistent support, ahead by at least 10 points, for a second independence referendum and for a “Yes” vote on the same. The next parliamentary elections, in May, might yet be effectively or even explicitly a plebiscite on independence.

The debate about currency is getting lively again as supporters of a separate Scottish currency grow in confidence. By spring, the universal basic income and the possibility of a newly independent state issuing the currency it needs for it are likely to be a major talking points in Scotland.

— Pope Francis talks about Uighurs, George Floyd and Universal Basic Income in new interview
— Read: An exclusive essay by Pope Francis on a ‘personal Covid,’ his exile in Argentina
— Can Pope Francis visit Iraq safely—even with a Covid vaccine?

David Stewart, S.J., London Correspondent for America 2014-2020, files from his native Scotland where he now lives and works.