Can Pope Francis visit Iraq safely—even with a Covid vaccine? 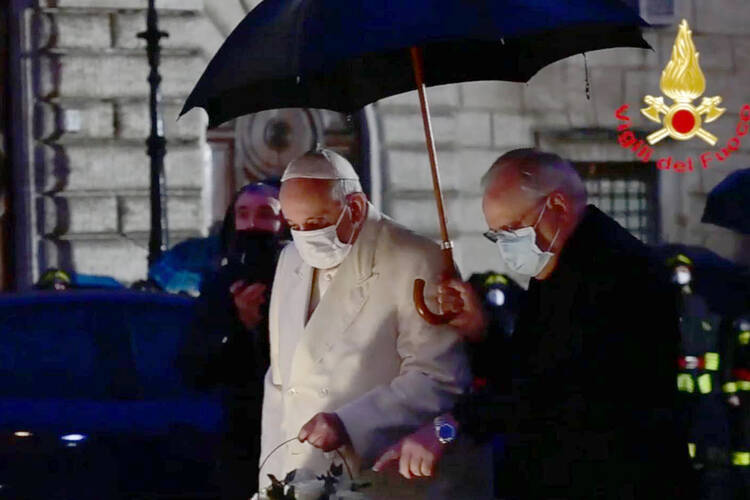 Pope Francis wears a face mask as he arrives at the Spanish Steps in Rome, Tuesday, Dec. 8, 2020. (Vigili del Fuoco via AP)

News of the pope’s proposed visit in March 2021 to the embattled Christian communities of Iraq brought elation to the people of Qaraqosh, a predominantly Syriac Catholic city in Northern Iraq’s Nineveh province.

Yohanna Towaya, a university professor and Qaraqosh resident, expects that when Pope Francis comes to Nineveh, all the Christians of the city and its surrounding villages will surely attend whatever public Masses or other events are scheduled. “He will give us a hope to stay, and also [his visit] means the Catholic Church does not forget the people of the East.”

Hundreds of Christian families fled into Iraqi-Kurdistan when Qaraqosh was overrun by ISIS militants in 2014. After years in camps and impromptu shelters across northern Iraq and Kurdistan, Iraqi Christians began to return to the city and ancestral villages around it just weeks after ISIS militants were driven out by U.S., Iraqi army, Shiite militia and Kurd Peshmerga forces in 2017.

While a visit from the pope will no doubt provide a spiritual and psychological boost to Nineveh Christians, under the current pandemic conditions it is a prospect that must give local public health officials pause. “The people will go to see him even if there is coronavirus,” Mr. Towaya assures. “They don’t care about that; they will not stay home; they will go, and they will receive him.”

While a visit from the pope will no doubt provide a spiritual and psychological boost to Nineveh Christians, under the current pandemic conditions it is a prospect that must give local public health officials pause.

World Health Organization officials and the Holy See Press Office did not respond to questions about how the pope’s visit and related public events could be conducted safely, but W.H.O. guidelines currently in effect urge “that all countries with community transmission should seriously consider postponing or reducing mass gatherings that bring people together and have the potential to amplify disease.”

Though rates of Covid-19 in Iraq have declined since October, on average more than 2,000 new cases have been confirmed each day throughout November and December. More than 571,000 Covid-19 cases have been reported in Iraq since February, and more than 12,500 Iraqis have died.

Even as announcements are made of vaccine breakthroughs and wealthier nations like the United States and United Kingdom line up to reserve millions of vaccine doses, the World Health Organization predicts widespread distribution of a vaccine for coronavirus will not begin until sometime in the middle of 2021, long after the dates currently proposed for the pope’s visit to Iraq. A W.H.O. program to accelerate development and distribution of an affordable coronavirus vaccine faced a $28 billion shortfall in December.

The Holy See announced on Dec. 7 that Pope Francis intends to end a 15-month suspension of international travel by fulfilling a long-term wish to visit Iraq. His apostolic trip is planned from March 5 to March 8 next year, and it is believed that the pope will by then likely have already received a coronavirus vaccine.

According to the Vatican, the pope will visit Baghdad, the southern plain of Ur—considered the birthplace of Abraham—as well as Mosul, Qaraqosh in Nineveh and Erbil in Iraqi-Kurdistan. Christians and other religious minorities suffered greatly in those communities at the hands of ISIS militants and have been struggling against powerful economic and political forces to re-establish themselves. The Chaldean, Syriac and Orthodox Christian community of Iraq has been reduced from approximately 1.5 million before the U.S. invasion in 2003 to a remnant population of an estimated 150,000 to 250,000 today.

“The people will go to see Pope Francis even if there is coronavirus. They don’t care about that, they will not stay home; they will go and they will receive him.”

The pope’s proposed visit was warmly welcomed by the Chaldean Archbishop of Erbil Bashar Warda, who said on Twitter: “I thank the Pope for his courageous decision to visit Iraq in March. It has always been his mission to go to the margins & the marginalised: His important flock here is not forgotten. The Pope will come spreading the gospel of peace, goodwill & reconciliation for all in Iraq.”

Mr. Towaya is confident the pope will be safe during what will surely be, for his security handlers, an anxiety-ridden apostolic visit. In Baghdad, Mr. Towaya says, the pope can count on Iraqi army security and limited public contact. In Nineveh, among a Christian community struggling to restore itself, he is confident the visit can be conducted without incident.

According to Mr. Towaya, as restoration of homes, businesses and churches continues, life has returned to normal in Qaraqosh. “No bombs,” he says cheerfully.

He explains that Christians now feel secure enough to visit Mosul even until late at night, once a forbidding prospect, though he believes only about 20 Christian families have returned to homes in the city that had been seized by ISIS in June 2014. He likened the current security situation to a time long before the ISIS rampage and even before the tension and violence that followed the U.S. invasion, precipitating the nation’s slide into chaos. “It’s like before 2003,” he says.

He likewise diminished the invisible threat of the coronavirus, pointing out that its impact on Qaraqosh seems to have waned in recent weeks, with caseloads trending down and only a few deaths in the community because of Covid-19.

People go about their lives normally here now, Mr. Towaya says. Restrictions have been lifted and the churches are full during Mass. Although most residents wear masks indoors and inside churches, when outdoors they go about normally. “The life is as before Covid,” he says. “All the churches are open; they started all the activities.… We have no restrictions about anything.”

Noting that Nineveh’s Christians have already endured ISIS, Shiite militias, displacement and murderous conflict, he cannot imagine that the threat of Covid-19 will keep them from celebrating the visit of Pope Francis.

“They will see the pope; the pope will give them new hope to stay. They are all awaiting this day,” he says. “This is something for the Christians also, to say, ‘We are here; we will stay; we will not leave.’ That is the message that the Christians want to give for the world.”

– Pope Francis plans to visit Iraq in March after getting a Covid vaccine
– Read: An exclusive essay by Pope Francis on a ‘personal Covid,’ his exile in Argentina
– Explainer: What is the Zaire rite—and why is Pope Francis talking about it now?