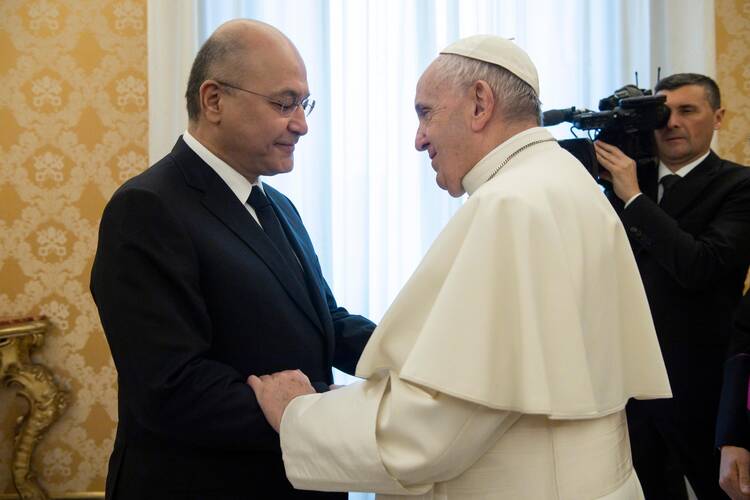 In news that took most Vatican officials and observers by surprise given the ongoing global spread of the coronavirus pandemic, the Vatican announced today that Pope Francis will visit Iraq on March 5-8, 2021. He will be the first pope to visit this majority-Muslim country, the home of the patriarch Abraham, where the Christian presence has been decimated following the U.S.-led war to remove Saddam Hussein, in March 2003.

Francis has long expressed his desire to travel to Iraq to comfort the beleaguered Christian population of this land and to encourage the people of this war-torn country of 38 million people, though the ongoing conflict in the country frustrated earlier attempts to plan a visit.

Francis has long expressed his desire to travel to Iraq to comfort the beleaguered Christian population of this land.

The Vatican broke news of the plans at midday on Monday, Dec. 7, in a statement from the Director of the Holy See press office, Matteo Bruni, who made clear that the visit will last four days and cover four provinces. He said:

“Pope Francis, accepting the invitation of the Republic of Iraq and of the local Catholic Church, will make an apostolic journey to the aforementioned country on 5-8 March 2021. He will visit Baghdad, the plain of Ur, linked to the memory of Abraham, the city of Erbil, as well as Mosul and Qaraqosh in the plain of Nineveh.”

He added that “the program of the journey will be made known in due course and will take into consideration the evolution of the worldwide health emergency.”

Vatican sources admit that the visit is “risky,” expressing concerns not only about the security situation in Iraq but also about the challenge of the pope attracting large crowds during the pandemic. They said the pope is determined to console and encourage the inhabitants of this war-torn land and give new heart to the Christians of this country.

The Vatican statement indicated planning for the visit will take the evolution of the pandemic into account when organizing events in Iraq. Additionally, America has learned that the Vatican, like other countries, has already ordered doses of the Covid-19 vaccine, and expects that the pope and those travelling with him will be able to be vaccinated before the scheduled trip in March.

Francis has been keen to comfort the Christians of this land, who have been decimated during the U.S.-led war to remove Saddam Hussein, the subsequent civil war and the conflict involving ISIS. Before the 2003 war, Vatican sources told America that there were some 1.5 million Christians in this land, but that currently there may be as few as 250,000. Definitive figures are not readily available in the current situation.

Many Christians died during the conflict or were internally displaced, and many were forced to leave the country or opted to go into exile out of fear of death or persecution. In recent years, however, tens of thousands have begun to return and re-settle in the Nineveh plains, an area that was occupied by the Islamic State between 2014 and 2017 and one of the pope’s planned stops on the March trip.

Pope Francis has spoken frequently of his desire to visit Iraq. On Jun. 10, 2019, he told participants at a meeting of Catholic aid agencies for the Oriental Churches, “I think constantly of Iraq—where I want to go next year—in the hope that it can face the future through the peaceful and shared pursuit of the common good on the part of all elements of society, including the religious, and not fall back into hostilities sparked by the simmering conflicts of the regional powers.”

He will be the first pope to visit this country, the birthplace of Abraham.

He will be the first pope to visit this country, the birthplace of Abraham. Pope St. John Paul II had planned to travel to Iraq at the end of 1999 and visit Ur, where Abraham lived, but after lengthy negotiations, Saddam Hussein prevented that visit from going forward.

On January 25 of this year, Pope Francis received the President of Iraq, Barham Salih, in a private audience in the Vatican, where, according to a press statement issued afterwards by the Holy See press office, the two leaders spoke about “preserving the historical presence of Christians in the country” and “highlighting the need to guarantee their security and a place in the future of Iraq.”

Iraq’s president and prime minister have often invited Christians who have fled the country to return and help rebuild the nation.

Last year, Cardinal Louis Raphael Sako, the Patriarch of Babylon of the Chaldeans, the head of the Chaldean Catholic Church to which most Iraqi Christians belong, told the Italian Catholic news agency SIR, that Pope Francis will receive an enthusiastic welcome to Iraq. He said, “Everyone in Iraq, Christians and Muslims, esteem [Pope Francis] for his simplicity and nearness. His words touch everyone’s hearts because they are those of a shepherd. He is a man who brings peace.”

Unicef, the United Nations children’s aid agency, estimates that some 4 million Iraqis require humanitarian assistance, of whom half are children. The Covid-19 pandemic has caused the deaths of thousands in Iraq, and the situation remains dire.