With Biden victory, Pope Francis may find a natural ally in the second Catholic president 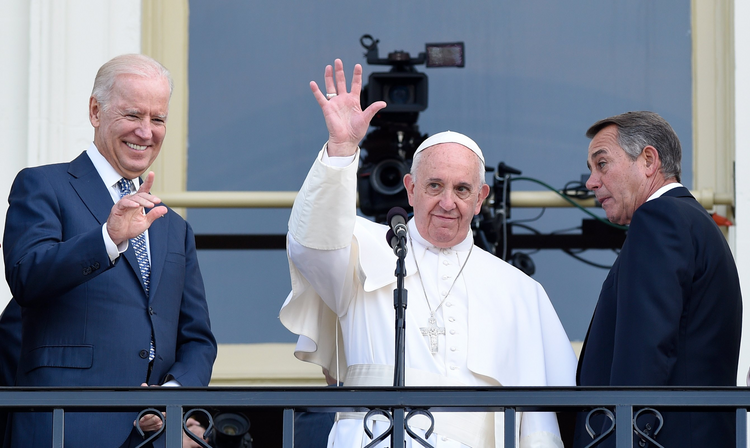 Pope Francis, flanked by Vice President Joe Biden and House Speaker John Boehner of Ohio, waves to the crowd on Capitol Hill in Washington, Thursday, Sept. 24, 2015, as they stand on the Speaker's Balcony on Capitol Hill, after the pope addressed a joint meeting of Congress inside. (AP Photo/Susan Walsh)

VATICAN CITY (RNS) — While Pope Francis and the Vatican will likely wait for President-elect Joe Biden's inauguration before commenting on the result of the fractured elections in the United States, the former vice president is already being received as a promising ally for this pontificate.

Vatican-U.S. relations have grown increasingly strained in recent years, mainly as a result of the opposing views of Pope Francis and the Trump administration on a wide range of issues, from immigration to the environment.

Francis, who has sought to build bridges with other religions, cultures and the scientific community, has often presented an opposing force to Trump's wall-building politics.

Francis, who has sought to build bridges with other religions, cultures and the scientific community, has often presented an opposing force to Trump’s wall-building politics.

The second Catholic president of the United States after John Kennedy will likely align with many of the priorities of this pontificate. The transition plan proposed by his campaign, published on Nov. 9, focuses on addressing the global pandemic, economic recovery, racial equity and climate change.

In a speech on Oct. 27, Biden quoted from Fratelli tutti, asking the questions that Francis says leaders must ask themselves if they wish to engage in politics. “Why am I doing this? What is my real aim?” Biden said, quoting the pontiff, before answering: “To unite this nation. To heal this nation.”

Biden’s recent promise to recommit to the Paris Agreement and “to go much further than that,” will earn a hearty thumbs up from the Vatican.

The theme of unity is a welcome one for a pontificate that has been battling polarization just as extreme as the divide in U.S. presidential politics.

Biden’s intention “of not dividing, but uniting a very polarized society” is a positive answer to “the pope’s appeal to build bridges and not walls,” said the Rev. Antonio Spadaro, a key adviser to Pope Francis and director of the Jesuit publication Civiltà Cattolica, in a Nov. 8 interview with AdnKronos.

The second Catholic president of the United States after John Kennedy will likely align with many of the priorities of this pontificate.

On foreign affairs, the Vatican and the Trump administration often found common ground. The U.S. Embassy to the Holy See has collaborated effectively with the Vatican over the past four years, especially on freedom of religion and human trafficking, working in close partnership with Catholic religious orders and organizing events.

But the two states have clashed over China. In late September, American Secretary of State Mike Pompeo spoke at an event held at the embassy on the topic of advancing international religious freedom, apparently objecting to an experimental agreement the Church has been negotiating to share responsibility for selecting Chinese bishops with Beijing. Pompeo asked that Catholic leaders not renounce their “moral witness.”

Pope Francis’ number two, Cardinal Pietro Parolin, expressed “surprise” at what many in the Vatican saw as interference with its relations with China. The Vatican has been working toward restoring diplomatic ties with the superpower in hopes of making life easier for its roughly 6 million Catholics.

The prospect of a Biden White House rekindles Vatican hopes for a renewed U.S. commitment to multilateralism, including more cooperative engagement with China.

The election of Kamala Harris as Biden's vice president will buttress the themes Francis has pushed over his seven years as pope.

“With Biden’s vice president, Kamala Harris, a woman with Indian origins, we have a powerful immigrant representative who found in the American society an opportunity to realize a dream,” Spadaro said.

“This is one of the radical elements of the American myth that will be recovered,” he added.

Not everyone in Rome is celebrating the election. Biden and Harris’ support for abortion and progressive family policies have already garnered pushback from Catholics, especially conservatives.

Cardinal Raymond Burke, a vocal papal opponent, said in late August that, due to his views on abortion, Biden “is not a Catholic in good standing and he should not approach to receive Holy Communion.”

But even on this Biden and Francis may find ways to express solidarity. While comparing abortion to “hiring a hitman,” Francis has been dovish in condemning abortion legislation globally, preferring to address life issues in a broader framework that encompasses the multitude of human experiences, from poverty to artificial intelligence.

Claire Giangravé - Associated Press
@ClaireGiangrave
Show Comments ()
Join the conversation: Login or create an account
Before you can comment, you need to update your profile to include your first and last name, as required in our comments policy. Then reload this page and you'll be set up for commenting. Update your profile