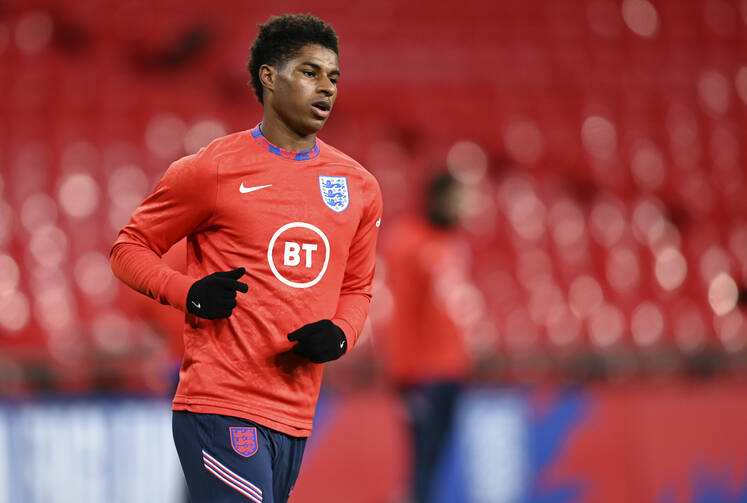 England's Marcus Rashford warms up ahead of their UEFA Nations League soccer match against Denmark at Wembley Stadium in London on Oct. 14. (Daniel Leal-Olivas/Pool via AP, file)

LONDON (AP) — The British government has made another abrupt about-face and now says it will provide free meals to disadvantaged children in England over the upcoming holidays following a hugely popular child hunger campaign by soccer star Marcus Rashford.

British Prime Minister Boris Johnson phoned the 23-year-old Manchester United striker after his team’s Premier League victory over Everton on Nov. 7 to inform him of the government’s decision to spend 170 million pounds ($220 million) in extra funding to support needy families over the coming year.

“Following the game today, I had a good conversation with the prime minister to better understand the proposed plan, and I very much welcome the steps that have been taken to combat child food poverty in the U.K.,” Rashford said. His petition demanding the Conservative government pay for free school meals for disadvantaged students over the holidays attracted more than 1 million signatures.

The money will be handed to local authorities by December in time to support families over Christmas, many of whom are facing financial difficulties due to the coronavirus pandemic.

Rashford, who has eloquently spoken about his own childhood experiences of relying on free school lunches and food banks, said the steps taken will improve the lives of nearly 1.7 million children in the U.K. over the next 12 months, “and that can only be celebrated.”

Breathtaking sums have been spent by Prime Minister Boris Johnson’s government since the Covid-19 tempest broke on U.K. shores in March, and just about every penny of it has provoked some kind of controversy. Wrangles continue over persisting shortages of personal protective equipment in U.K. hospitals, and louder ruckuses have begun over contracts awarded amid allegations of improper procurement.

A fresh squall is brewing over as much as 12 billion pounds squandered ($15.5 billion) on a track-and-trace system for England that still does not work. And the U.K. government’s “job-retention scheme,” initially viewed as generous, is set to end just as a second wave of infections may inundate Britain, sinking both the economy and the national health care system.

Further trouble for the floundering government washed in when Tories rejected demands to maintain meals for schoolchildren during vacations as the Covid-19 pandemic closed their schools. It took a young professional footballer to rescue the kids by creating an impressive public relations challenge to government policy.

In England, Manchester United footballer Marcus Rashford has become a hero off the pitch after championing kids and families living in poverty, refusing to forget that his own background was not much different.

Marcus Rashford, a 22-year-old footballer signed to his hometown team, the world-famous Manchester United, cut an unassuming figure when he first broke into the game’s top tier at only 18. But scoring goals in his first senior appearances, Mr. Rashford quickly caught the eye of football fans. The latest “wonderkid” of English football, he gained selection to the national side and became the youngest English player ever to score in an international debut.

Defenders soon grew wary of this tall, athletic and skillful newcomer, possessed of a potent goalscorer’s shot; someone should have warned the Tories. This season it is the government who failed to deny him possession. Mr. Rashford has become a hero off the pitch after championing kids and families living in poverty, refusing to forget that his own background was not much different.

For over a century, each of the current nations in the United Kingdom provided free school lunches in state schools to children from poorer circumstances. The devolved governments in Wales, Northern Ireland and Scotland have continued to provide these meals. England could have been just as merciful but chose to be miserly.

In 2019 in England alone about 1.3 million children benefitted. Brought up with four siblings by his single mum, Mr. Rashford was among the beneficiaries of that state support.

The Covid-19 situation has exacerbated the problem of hunger in England. The pandemic has meant school closures but created other absences in children’s lives as parents caught the virus.

He attended a Manchester primary school where pupils receiving free school meals numbered twice the national average, a figure broadly unchanged today. His mother worked full-time, but in discussions with British media, Marcus recalls many evenings when there was little food to go around.

The Rashfords were not unique. In-work poverty, in many parts of Britain, has been worsening. Recent studies show that as many as six in ten people in poverty live in a household where at least one person is in paid work, while the respected Joseph Rowntree Foundation reports over four million workers now in poverty.

In June, after the footballer raised an alarm about the impending end of nutrition support, Mr. Rashford forced the government into an embarrassing U-turn. Ten Downing Street agreed to restore the program, dubbing it the “COVID Summer Food Fund” as “a specific measure to reflect the unique circumstances of the pandemic.” The government then sullenly advised that the 120 million pound scheme would “not continue beyond the summer and those eligible will be those who already qualify for free school meals.”

Mr. Rashford then focused his goalscorer’s eye on the autumn half-term school break and the Christmas holidays, demanding a similar U-turn from the prime minister. The Conservative government, despite widespread support for the campaign and a rebellion by up to 100 of its own members of Parliament, so far has refused to budge.

Mr. Rashford responded on Twitter: “Put aside all the noise, the digs, the party politics and let’s focus on the reality. A significant number of children are going to bed tonight not only hungry but feeling like they do not matter because of comments that have been made today.

Marcus Rashford: “Put aside all the noise, the digs, the party politics and let’s focus on the reality. A significant number of children are going to bed tonight not only hungry but feeling like they do not matter.”

“We must stop stigmatising, judging and pointing fingers. Our views are being clouded by political affiliation. This is not politics, this is humanity.”

On Oct. 28 against RB Leipzig, Mr. Rashford came into the game as a substitute and then scored three goals in just 16 minutes. While his fans were marveling at that rare hat-trick, Mr. Rashford used the attention in the team dressing-room to announce that his online petition had just passed a million signatures.

Mr. Rashford’s efforts to protect school meals revealed another injustice in the system, hitherto not widely known, except by those to whom it caused much misery; that to qualify for school meals, families had to forego other benefits such as the Working Tax Credit.

For families with wage-earners in low-paid jobs, including scandalously low-earning frontline health care workers, to accept the vouchers meant losing those tax-credits. Many chose not to, so the children suffered. Frequent reports in British media tell of headmasters and teachers in urban schools spending personal funds to feed pupils, even buying them footwear and clothing.

The Covid-19 situation has exacerbated the problem of hunger in England. The pandemic has meant school closures but created other absences in children’s lives as parents and carers caught the virus. The second wave, currently sweeping across Europe, could lead to more school closures, although the governments of the four British nations are determined to keep them open for as long as possible.

Yet school attendance figures, as winter approaches, are decreasing by the day, down to 86 percent in late October. Educators are expressing concern that, before long, irreversible damage might be done to learning and lifetime achievement; next spring’s exams might have to be postponed.

All four nations of the United Kingdom, rather than returning to the full lockdowns of March, are attempting to apply different levels to different regions and cities, according to the severity of infections. Northern Ireland, with a strict raft of new restrictions, and Wales are in “circuit-breaker” semi-lockdown. Scotland is introducing a new five-tier regime in which the top tier is close to total lockdown.

Mr. Rashford’s campaign still draws widespread support, even as he plays football in empty stadiums, and may in the end keep food coming to hungry children. He has sprinted past the missed tackles of Conservative lawmakers, over 300 of whom voted down the school-meal proposal in the Commons and some of whom tried to trip up his campaign with outrageous suggestions that meal-vouchers would only go to crack dealers in the inner-cities.

Here’s hoping he can continue to score against Tory goalkeeping. As the second-wave tsunami threatens to overwhelm us, we need all the good news we can get.

David Stewart, S.J., London Correspondent for America 2014-2020, files from his native Scotland where he now lives and works.