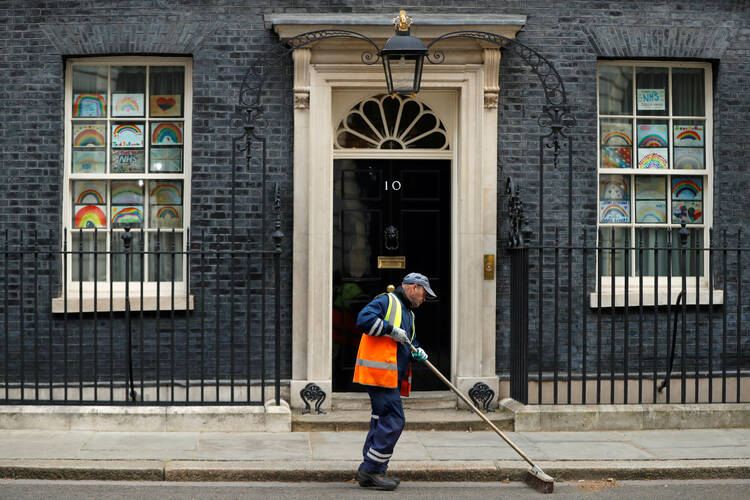 A street cleaner sweeps outside a residence in London May 4, 2020, during the COVID-19 pandemic. (CNS photo/John Sibley, Reuters)

Pentecost Sunday ended an Eastertide like no other. It was on the final weekend of March when the clocks changed to summer time and the evenings suddenly felt much longer than the added hour, when Brits realized that the coronavirus pandemic was actually for real.

As midsummer looms, the United Kingdom now bears one of the world’s highest Covid-19 death tolls. There is anger, especially at the high number of deaths in the country’s nursing homes, and widespread dismay at the London government’s stumbling attempts at managing the pandemic and failure to learn from the experience of other countries like Italy and Germany.

It has become part of the new normal to schedule a Zoom call, and Britons have all become amateur epidemiologists; some wondered why the skin on our regularly washed hands aged 20 years in days. Queuing, supposedly a core skill of your average Brit, outside grocery stores became quickly but wearily accepted.

The House of Commons briefly flirted with video links for Honourable Members locked down in faraway constituencies; it even tried using electronic voting until the Tories forced through a resumption of the old ways, widely thought to be to shore up Boris Johnson’s ragged performances at Prime Minister’s Questions time, deprived of his usual baying horde on the green benches behind him.

There is anger, especially at the high number of deaths in the country’s nursing homes, and widespread dismay at the London government’s stumbling attempts at managing the pandemic.

In the churches of all four nations of the United Kingdom, there is deep sadness because parish teams cannot see the people even as they discover new ways of keeping in touch; livestreamed Masses now abound. We have become very aware that the faithful are “shopping around” online.

Funerals present a particularly vexing situation, emotionally and spiritually demanding for families but also for clergy, whose distress at how little they can do for the bereaved is not always acknowledged. We now move to a limited re-opening of churches for, as the religiously illiterate state has put it, “private” prayer (Is there such a thing? They probably mean “personal”) amid widespread concern that it is too early.

We are reopening the churches weeks after we reopened large stores and bookshops and at the same time as we are reopening zoos. The figures show higher infection rates now than when the lockdown was imposed; there are fears of a “second spike” if not now, then next winter.

There are also more hopeful signs and there might even be a vaccine, thanks to remarkable work at Oxford University and Imperial College, London. This first half of 2020 will not suddenly self-correct at midsummer, but what it will be like by the year’s end, for civil society, government and for houses of worship, is one of the biggest questions Britons have ever faced.

Back in March, the Johnson government’s lack of urgency contrasted with other strands in civil society, which moved unbidden to shut down most of the entertainment and leisure industry. One by one, events were canceled and venues closed, from London’s West End theaters and symphony concerts to Premiership football matches and, of course, church services. Many in the private sector acted before they were told to by government. Now, the reverse appears to be happening; pubs, anxious about suffering staff and lost revenue, are serving again as long as the punters take their pints outside.

June saw particularly inglorious statistics as, on several days, the United Kingdom’s death toll exceeded the aggregate toll of all remaining E.U. states and reached the continent’s top spot for the total number of deaths.

In a move that now looks reckless, a major horse-racing event at Cheltenham in south-west England went ahead unimpeded, gathering up to 250,000 racegoers on each of three March days. Several thousands of Liverpool football supporters attended a big match in Madrid. Weeks later, as England’s mortality figures soared, many wondered how much cross-infection might have occurred in those grandstands.

Maybe it took the news that the prime minister himself had gone into isolation then an I.C.U. or the Covid-19 enforced isolation of his hapless Health Secretary Matt Hancock that finally roused when England slept. Had the U.K.’s top politicians followed their own guidelines or been muddled by them, too? Or maybe it was the news a rich elderly landowner had defied one particularly explicit bit of public health advice and fled London for a second home in the Highland Scottish countryside, a rural area with limited public health assets, with his consort and a large cohort of servants?

For this was Prince Charles, the heir to the throne and vast personal wealth, bolting to Balmoral Castle despite explicit guidelines to stay in place then duly discovering that he had caught the virus. Corona had hit the crown. This was our spring of discontent, made inglorious by this son of Windsor. Maybe that scandalous display of sheer entitlement at least helped other Britons to get the message.

April, for most people, quickly became the cruelest month. At least that is for those not already infected themselves or in isolation because a family or household member had caught the virus or because someone close had died from it. The Johnson government was touting “herd immunity,” despite the World Health Organization’s disparagement of the concept.

Then came May, when heroic health care professionals battled not only the contagion but bungling and deadly government complacency. Death rates soared, passing both previous hot spots, Italy and Spain. Rumors of the scandalous carnage in many care homes spread. Yet still there was too little testing and a widespread shortage of personal protective equipment for exhausted health care workers in England.

June saw particularly inglorious statistics as, on several days, the United Kingdom’s death toll exceeded the aggregate toll of all remaining E.U. states and reached the continent’s top spot for the total number of deaths.

Many in the private sector acted before they were told to by government. Now, the reverse appears to be happening; pubs are serving again as long as the punters take their pints outside.

Through it all, Britons have displayed heart-breaking examples of altruism and community spirit but also much crass and selfish behavior. The traditional Easter holiday weekend exhibited more of the latter as most of the country basked in lovely warm spring sunshine and temperatures in the high 20s (68 and above degrees Fahrenheit) that led many to think they could make that seaside trip or gather friends for a barbecue in the park with impunity.

Since then, the fine weather has continued to draw day-trippers to the fury of many villagers and vulnerable rural communities. V.E. Day, at least in England, already scheduled to replace the customary early May public holiday, brought more warm sunshine and crowds into the streets for parties and, in one notorious instance, a neighborhood conga-dance that precluded any social distancing and indulged the fiction of many, not even born at the time, that plucky Britain alone had won World War II by dint of sheer dogged determination and bulldog spirit.

Mr. Johnson’s government, already reeling from criticism of its incompetent response, had to try to weather yet another storm entirely of their own making. Svengali-like Dominic Cummings, the special advisor to the prime minister, was found to have broken lockdown rules on travel that he personally helped draft.

He had driven, with his Covid-symptomatic wife and toddler son, to Durham, over 300 km (186 miles) from London. During a self-exculpatory press conference in the Rose Garden outside the back door of Number 10, he acknowledged breaking the pandemic rules but came nowhere near an apology; parental instinct superseded all.

Mr. Cummings has built a career on deprecating elites but is now widely reviled for ignoring rules, which apparently apply only to the common herd. Determined not to sack his special advisor, Mr. Johnson told the country that Mr. Cummings had “acted responsibly, legally and with integrity,” leading many to wonder what he might reveal if fired.

His political survival probably owes more to the prime minister’s desire to get the final Brexit push done by December’s conclusion of the current one-year transition period. Once more, although it barely makes the front pages, the specter of a no-deal final exit rises again.