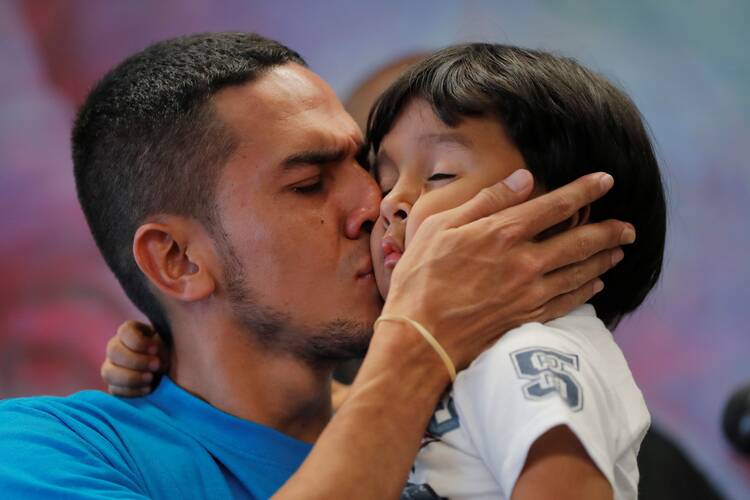 Javier, a 30-year-old immigrant from Honduras, kisses his 4-year-old son, William, July 11 in New York when they were reunited after being separated for 55 days during detention at the Texas border. (CNS photo/Lucas Jackson, Reuters)

Pope Francis called the Trump administration policy of separating children at the border “cruelty of the highest form” in a new documentary that premiered in Rome today.

“It’s cruelty, and separating kids from parents goes against natural rights,” the pope says in the documentary “Francesco.” “It’s something a Christian cannot do. It’s cruelty of the highest form.”

Under the Trump administration, U.S. border enforcement officials began separating children from their parents as early as 2017, according to the Associated Press. The administration implemented a zero-tolerance policy in May 2018, leading to more than 2,700 children being separated from their parents in less than a month. That June, a U.S. district judge ordered an end to the practice.

In a new documentary, Pope Francis says separating migrant children from their parents is “something a Christian cannot do. It’s cruelty of the highest form.”

Yet today, three years after being separated, 545 children have still not been united with their parents, according to court-appointed lawyers.

“We know that the separation of children was a willful and calculated strategy to weaponize against vulnerable migrants at the border the most sacred thing they had—their family,” Dylan Corbett, the executive director of the Hope Border Initiative, said in an email to America.

“The revelation that years later we still have not been able to reunite hundreds of families points to the lasting and irreversible damage of this awful moment of moral darkness in our nation’s history,” he said. “We need to remember, make amends and end the cruel strategies of deterrence against migrants in every form they take.”

Ashley Feasley, the director of migration policy and public affairs at the U.S. Conference of Catholic Bishops, said that while separations from children and parents happened on occasion under the Bush and Obama administrations, the Trump administration policy is different. “This has been large scale and strategic and intentional,” she said.

The Trump administration also had no plan to reunite the children with their parents, and they have yet to establish a tracking system to keep track of children, Ms. Feasley said. She noted that Lutheran and Catholic agencies worked together to reunite 1,500 families in 2018. Yet, Ms. Feasley said, many of those families suffer ongoing mental health problems stemming from the traumatic separation experience.

Today, three years after being separated, 545 children have still not been united with their parents, according to court-appointed lawyers.

“They knew they had no way to ensure that families could be reunited and moved forward anyway,” she said. “It was calculated to wreak havoc on families’ lives. And it did.”

Linda Dakin-Grimm, an immigration attorney, described the separation of children from their parents as a deterrence tactic on the part of the administration. When the zero-tolerance policy was announced, then-Attorney General Jeff Sessions admitted as much.

“The White House has been rolling out policies to discourage people from coming to this country since 2017,” said Ms. Dakin-Grimm, the author of Dignity and Justice: Welcoming the Stranger at Our Border. A number of immigrant advocate groups she works with challenge Trump administration efforts to curb immigration. “We almost always win because the policies are blatantly against the law,” Ms. Dakin-Grimm said. But, she explained, the Trump administration implements the broad measures to deter immigrants from coming to the border.

“They knew they had no way to ensure that families could be reunited and moved forward anyway. It was calculated to wreck havoc on families’ lives. And it did.”

“Using something like that as a tactic is evil,” she said. “As Catholics, we do not cooperate with evil ever. We’re not utilitarians. We work for the common good. Everyone should have what they need to survive and thrive and love God.”

Pope Francis also spoke about the construction of a border wall between the countries during the documentary. “And to build walls as if that were a defense. To defend what? Territory? The country’s economy? Or who knows what?” he says. “He who builds walls becomes a prisoner of the walls he builds.”

Ms. Dakin-Grimm, who has represented 75 children separated from their families, said Francis' statements on immigrantion can be traced to the teachings of previous popes, like Leo XIII and Pius XII. In 1952’s “Excul Familia,” for example, Pius XII wrote that a family’s right to migrate is part of the natural law.

Sometimes, after she gives talks in Catholic settings, people will approach her and say it is the parents fault that they were separated from their children. They should not have brought them to the border in the first place, they say. They do not understand that families, like the Arrendondos, are fleeing to save their lives.

Norma Pimentel, M.J., executive director of Catholic Charities of the Rio Grande Valley in Brownsville, Tex., is also featured in the documentary. She describes the experience of visiting children separated from their parents in a detention center in Tornillo, Tex.

“I was in the cells of the detention facility with children all around me crying, with their faces full of tears. And I’m there crying with them,” Sister Pimentel says. “It was so amazing to feel that presence of each other. Just embracing each other and that woundedness of the children needing their mother.”

The children begged her to please get them out. Border patrol agents, she says, thanked her for helping them see that the children are human beings.

[Listen to Voting Catholic: Do American Catholics have a responsibility to vote for policies that help immigrants?]