Voting Catholic: Do American Catholics have a responsibility to vote for policies that help immigrants? 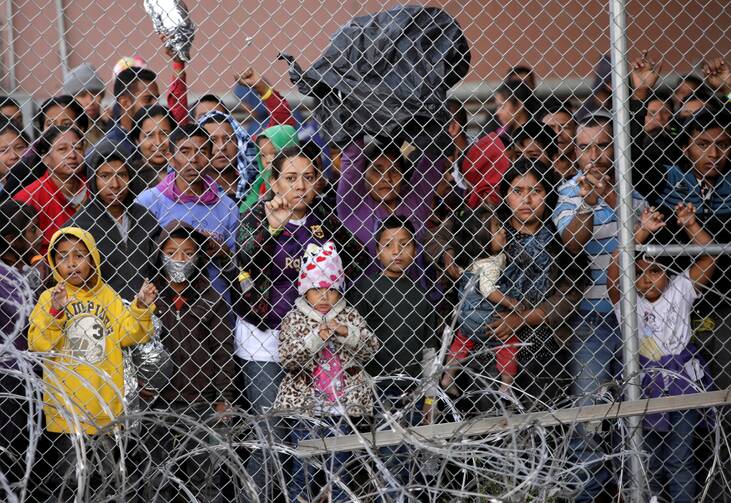 Central American migrants are seen inside an enclosure in El Paso, Texas, March 27, 2019. They were being held by U.S. Customs and Border Protection officers after crossing the U.S.-Mexico border and turning themselves in to request asylum. Under Trump administration policy, the migrants must be returned to Mexico and apply for U.S. asylum from there. (CNS photo/Jose Luis Gonzalez, Reuters)

When José Arnulfo Cabrera was four years old, his family decided to move to the United States.

“I was born in a small village,” Mr. Cabrera told Sebastian Gomes, an executive editor at America and the host of its new podcast Voting Catholic. “We lived in a small shack with aluminum walls and an aluminum roof. [We had] no running water, no electricity. My mom and I just had a bed and a bucket. My mom knew there was no life, no future for me in Mexico.”

Now, after growing up on the streets of Cincinnati and graduating from Xavier University, Mr. Cabrera works as the director of education and advocacy for migration at the Ignatian Solidarity Network, a Jesuit social justice organization. Much of Mr. Cabrera’s job involves finding ways to advocate for and help migrants and undocumented immigrants, something which he says is crucial to being a faithful Catholic.

Discussing how Catholics should approach comprehensive immigration reform, Mr. Cabrera said that the United States needed to enact policies “that see immigrants in a humane way that ensure that their dignity is being protected.”

“Immigration is always going to be a pawn for politicians to push their agenda.”

“The policies that legislators are writing and that advocates are fighting for, the foundation and the core of these policies must keep in mind that all immigrants are human beings that have dignity and that should be treated with respect,” he said. “I think, especially in the last few years, we have seen how children have been treated in detention centers at ports of entry at the border and how many immigrants have died in detention. We have to see this as a life issue. We must protect all life.”

Immigration is an issue that is very important to Mr. Cabrera. He talked extensively about the excitement he felt when Barack Obama spoke on this issue in 2008 and the disappointment that ultimately resulted when three million people were deported under his watch.

“We saw the start of the militarization of the border,” he said. “We started to see [the U.S. Immigration and Customs Enforcement, also known as] I.C.E become more organized. Obama was the first to push for E-Verify at a national level.” E-Verify, a database that checks if workers are in the country illegally, has harmed undocumented people considerably, according to Mr. Cabrera.

Deferred Action for Childhood Arrivals, commonly known as DACA, was one of the few Obama-era policies that Mr. Cabrera praised. DACA helped him and many other undocumented immigrants remain in the country. Donald Trump’s election in 2016 put DACA’s existence into jeopardy.

Mr. Cabrera spoke about the fear he felt after hearing the results of the election. He was unable to sleep, shocked by the reality he was facing. It was his final semester at Xavier University. He had just registered for his final classes. Now there was a good chance that he would never get to go to attend them. While he was fortunate enough to be able to graduate from Xavier, the Trump administration indeed rescinded DACA in 2017. But federal court orders have kept the program on life support.

“Immigration is always going to be a pawn for politicians to push their agenda,” Mr. Cabrera said. “We’re always getting played no matter what aisle you want to look at.”

Ultimately, he said, standing up for immigrants reflects an important concern of Catholic social teaching.

“I think a lot of [American Catholics] need to have more encounters with undocumented immigrants and asylum seekers and refugees,” he said. “And they have to understand where they’re coming from. They have to practice what the Bible tells us to do: Welcome our neighbor.”

To hear more of Mr. Cabrera’s story, including his personal experiences with American politics and how he became an activist for undocumented immigrants, be sure to listen to Voting Catholic, a new podcast by America Media that helps Catholics discern how to vote in the 2020 presidential election.