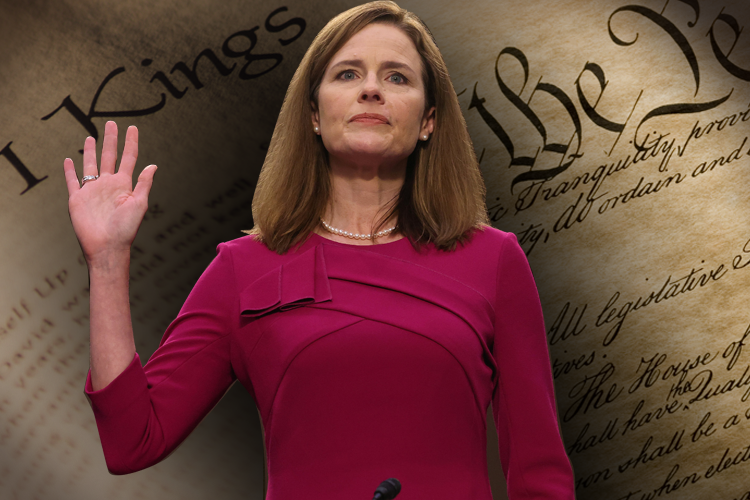 Judge Amy Coney Barrett of the U.S. Court of Appeals for the 7th Circuit, President Donald Trump's nominee for the U.S. Supreme Court, is sworn in for her confirmation hearing before the Senate Judiciary Committee on Capitol Hill in Washington Oct. 12, 2020. (CNS photo/Win McNamee, Pool via Reuters/iStock composite)

The nomination of Judge Amy Coney Barrett to the U.S. Supreme Court has prompted a vigorous discussion among American Catholics about her faith as well as her method for interpreting the U.S. Constitution. As a practicing Roman Catholic, Judge Barrett presumably adheres to a Catholic method of biblical interpretation—that is to say, a broad approach, one that considers more than the literal meaning of the text. As a practicing attorney, Judge Barrett’s preferred method of constitutional interpretation is textualism, which is a narrow approach to interpreting the text.

The short answer is yes.

How do Catholics interpret the Bible?

The first thing to remember is that the Bible, or sacred Scripture, is a source of divine revelation, but it is not the only source. As is stated in the document on divine revelation from the Second Vatican Council, “Dei Verbum,” there is also something called sacred tradition, which is the revelation that was entrusted to the apostles but was not committed to the sacred texts. Basically, that means that Catholics do not believe that everything God has revealed is written down in the Bible.

As for the method of biblical interpretation, let us turn again to “Dei Verbum”: “The books of Scripture must be acknowledged as teaching solidly, faithfully and without error that truth which God wanted put into sacred writings for the sake of salvation.”

Also notice the word “books,” as in “the books of Scripture.” What the council fathers are acknowledging there is that the Bible is not a book but a collection of books, each of which belongs to a specific genre of literature. From this diversity it follows that there is not just one method of biblical interpretation for Catholics but several different methods. Again, from “Dei Verbum”:

Since God speaks in Sacred Scripture through men in human fashion, the interpreter of Sacred Scripture, in order to see clearly what God wanted to communicate to us, should carefully investigate what meaning the sacred writers really intended, and what God wanted to manifest by means of their words. To search out the intention of the sacred writers, attention should be given, among other things, to “literary forms.” For truth is set forth and expressed differently in texts which are variously historical, prophetic, poetic, or of other forms of discourse. The interpreter must investigate what meaning the sacred writer intended to express and actually expressed in particular circumstances by using contemporary literary forms in accordance with the situation of his own time and culture.

Here is the upshot: According to Catholic teaching, the sacred Scriptures are to be interpreted in a way that 1) acknowledges their divine inspiration working through human agency; 2) distinguishes between the content that is essential for our salvation and that which is not; 3) uses a methodology that is appropriate for the kind of literature the text is (Gospel, history or poetry, etc.); and 4) privileges the intention of the author, or what the author meant to convey.

The Bible, or sacred Scripture, is a source of divine revelation, but it is not the only source.

And an important point: At the end of the day, if there is confusion or a dispute about the right interpretation, then the College of Bishops has the authority—entrusted to them as successors of the apostles—to make a definitive judgment.

Textualism is a method of interpreting the U.S. Constitution. There are several different forms of textualism, but all of them give primary weight to the text and structure of the document itself. Judge Barrett’s textualism is best described as “original meaning” textualism. She believes that the text should be interpreted according to what it would have been understood to mean by an ordinary person at the time that it was written.

The late Justice Antonin Scalia is probably the most well-known advocate for the textualist method of “original meaning.” In a 2013 column, I described Justice Scalia’s approach:

The advocates for this form of textualism simply believe that in a democracy, the standard of constitutional interpretation should center on the voter: What would the voters who voted for a particular constitutional provision, through their elected representatives, have understood it to mean at the time that they voted?

Mr. Scalia always referred to his method as “the lesser evil,” especially in comparison with the principal alternative method of interpretation: the “living Constitution.” The “living Constitution” is the idea that the Constitution is a kind of organic entity, that it “evolves” along with the nation’s social standards. Since the Constitution is somehow “alive,” it can mean different things to different generations. For textualists, the problem with that approach is that if there is that much room for the Constitution to mean what a judge wants it to mean, then we have a kind of undemocratic judicial overreach on our hands. Courts can take away rights just as easily as they grant them.

The advocates for original-meaning textualism simply believe that in a democracy, the standard of constitutional interpretation should center on the voter.

If people want to outlaw abortion or the death penalty, Justice Scalia once said, “Then do what we do in a democracy: Go out and vote for it.” If voters do not like the meaning of something, vote to change it, but do not let unelected judges decide the matter on behalf of voters.

“But,” you might say, “what about civil rights and all those objectively good things that the courts have brought about? Using his method, wouldn’t Mr. Scalia have voted against Brown v. Board of Education, for example?” No, Mr. Scalia said. If the court had applied his method, Brown would never have been necessary because “separate but equal” would never have been declared constitutional in the first place.

[Related: I see my own pro-life feminism in Amy Coney Barrett]

But all that is beside the point. We probably should not decide the best method of constitutional interpretation according to whether it produces decisions that we personally like. That, after all, is what people were constantly accusing Justice Scalia of doing.

I should note that even when they adhere to the same textualist standard of interpretation, two people can reach different conclusions in a range of cases.

But according to this method, the answer will be “no” more than “yes.” The Constitution, after all, is as much about limiting government and preserving the balance of democratic power as it is about enumerating rights. It is significant, for instance, that the Bill of Rights is largely a list of “noes” rather than “yeses” (“Congress shall make no law...,” etc.).

Whatever method is chosen, it is important to remember, too, that a method of constitutional interpretation is concerned with what the law is, not with what it should be.

Whatever method is chosen, it is important to remember, too, that a method of constitutional interpretation is concerned with what the law is, not with what it should be.

A second example: America’s editors have consistently  opposed Roe v. Wade, not primarily because our editorial board believes that abortion is immoral and should be restricted, which it does and always has, but because the decision in Roe is bad law. The decision reads into the text a right that is not there and that no one ever voted for.

[The Editors: Abortion is the real reason the Supreme Court is broken.]

So where does that leave us?

But more important, the Bible is divine revelation. As the council fathers note in “Dei Verbum,” what is most important in interpreting Scripture, therefore, is the intention of the author. We need to listen carefully for God’s voice.

The Constitution is not divine revelation. God is not speaking to us through our nation’s charter. It is, rather, the voters who are speaking to us through it. For textualists, what matters most is not the intention of those voters but the meaning the words would have had to those voters when they voted. In the early 20th century, American voters, through their representatives in state legislatures, passed the 19th amendment, giving women the right to vote. Why? Because no one who voted for the Constitution the first time around thought they were voting to grant women that constitutional right. It was not in the Constitution, so Americans voted to add it.

The Catholic method of interpreting Scripture prevents us from merely making the text say whatever we want it to (so that we can listen to the voice of God speaking through it), whereas the whole point of textualism is to preserve exactly the democratic possibility of making the text say (and do) what we want. The two methods are not only compatible but appropriate methods for the kind of text each document represents.