The Editors: At its core, the death penalty is indefensible 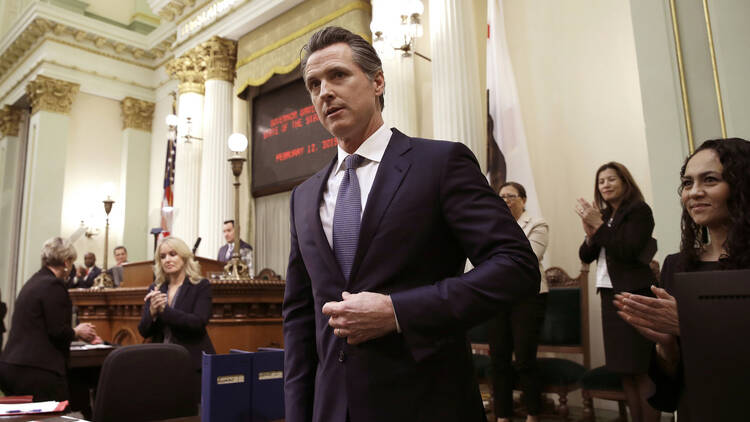 In March, Gov. Gavin Newsom of California imposed a moratorium on the use of capital punishment in that state, which has the highest population on death row (737 inmates) in the Western Hemisphere. The Democrat also ordered the dismantling of the state’s gas chamber; any future governor who seeks to restart the execution process will have the grisly task of procuring the equipment to do it.

Meanwhile, the U.S. Supreme Court is bedeviled by never-ending questions about capital punishment that underscore the practice’s capriciousness and cruelty. This winter the court refused to hear the case of an inmate in Alabama who had been denied the presence of a Muslim imam instead of a Christian chaplain in the execution chamber. In a 5-to-4 vote, the court said that the prisoner had failed to meet a state deadline for such requests. He was put to death by lethal injection on Feb. 8. But in late March, the court voted 7-to-2 to block an execution in Texas because officials there did not allow the inmate’s Buddhist spiritual adviser to be present in the execution chamber. Unfortunately, Texas responded by banning all clergy from the execution chamber (which is the policy of most states).

And on April 1, in another 5-to-4 vote, the court ruled that the Eighth Amendment’s prohibition of cruel and unusual punishment should not prevent the execution of an inmate in Missouri who said that a rare medical condition would cause him excruciating pain upon receiving a lethal injection.

These moves toward speeding up the execution process came after the Supreme Court narrowed the scope of the death penalty over the past couple of decades, abolishing it for crimes other than murder, crimes committed before the age of 18 and crimes committed by those deemed “mentally retarded.” The court has also wrestled with the question of racial bias in the application of the death penalty, though it has focused on jury selection and has pointedly declined to rule that the execution chamber is irredeemably tainted by racism.

Death penalty opponents have clearly failed to make a convincing case that the practice itself is unconstitutional. Even when the Supreme Court imposed a moratorium on executions in 1972 (by another 5-to-4 vote), it was on the grounds that the imposition of death sentences at the time was arbitrary and blatantly discriminatory against certain groups, not that the punishment was excessive. Still, the frequency of serious legal challenges since capital punishment was reinstated in 1976 demonstrates the difficulty—and the futility—of devising a perfect death penalty law.

Mr. Newsom has recognized this futility. “Our death penalty system has been, by all measures, a failure,” the governor said in March. “It has provided no public safety benefit or value as a deterrent.” Pope Francis went further when he revised the Catechism of the Catholic Church on this point last summer, declaring that the death penalty “is an attack on the inviolability and dignity of the person.”

Those who work in the U.S. criminal justice system, whether as defenders of the accused, as prosecutors or as advocates for victims of violent crimes and their families, increasingly consider capital punishment ineffective as a deterrent, as well as unjust and prone to uncorrectable errors. Consequently, the number of death sentences imposed each year fell by more than 80 percent between 2000 and 2018, and the annual number of executions fell from 85 to 25 over the same period.

This is a welcome trend, but our revulsion at state executions does not disappear when they happen less frequently. Indeed, the great fluctuations in its use over the past half-century only prove how much its use is driven by individual judges and lawyers, trial venues, changes in popular opinion and prosecutors’ personal judgments. The only rational—and moral—approach to the death penalty is to take its use off the table.

Amnesty International, in a report issued on April 10, 2019, pronounced the good news that worldwide the number of people killed by capital punishment had declined significantly from 2017-2018. Also, it's encouraging that last year by a court decision Washington became the twentieth state to ban the death penalty. Unfortunately, according to Amnesty International, the number of executions in our nation increased slightly from 2017-2018.
I oppose both capital punishment and legal abortion. Despite the commendable human rights work of Amnesty International, it's tragic that the group favors the violence of legal abortion.