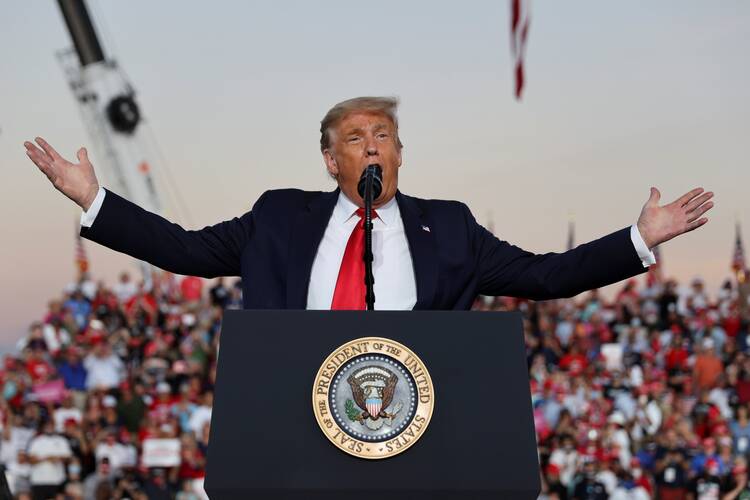 President Donald Trump campaigns at Orlando Sanford International Airport in Sanford, Fla., Oct. 12, 2020. It was his first rally since being treated for the coronavirus disease. (CNS photo/Jonathan Ernst, Reuters)

Just three weeks ahead of the Nov. 3 election, former Vice President Joseph R. Biden Jr. leads among Catholic voters in the United States. A sharp distinction between white and Hispanic voters gives President Trump the edge with white Catholics, though his support among that group seems to be softening.

According to an analysis published on Oct. 13 by the Pew Research Center, 51 percent of all Catholics said they would vote for or that they leaned toward voting for Mr. Biden if the election were held today, while 44 percent said the same of Mr. Trump. Broken out further, Mr. Biden leads among Hispanic Catholics 67 percent to Mr. Trump’s 26 percent. Mr. Trump has the support of 52 percent of white Catholics compared to 44 percent who chose Mr. Biden.

The gap among white Catholics “has narrowed significantly” from a poll conducted during the summer, the report found, when Mr. Trump led by 19 points over Mr. Biden, 59 percent to 40 percent. But the seemingly diminished support for Mr. Trump from white Catholics has not translated into significant gains for Mr. Biden, the report said, suggesting that some of the president’s defectors may choose third party candidates. Six percent of voters said they may choose someone other than the two major candidates.

White evangelical Protestants continue to be Mr. Trump’s most fervent supporters, with 78 percent picking Mr. Trump in this poll and 17 percent going for Mr. Biden. Among non-evangelical white Protestants, the match up is closer, with 53 percent choosing Mr. Trump and 43 percent Mr. Biden. Among all other groups polled—including “nothing in particular,” Jewish, “atheist/agnostic” and Black Protestant—support for Mr. Biden ranges from 30 to 80 points higher than for Mr. Trump.

The Pew poll was conducted between Sept. 30 and Oct. 5.

Supporters of both campaigns have engaged in targeted outreach to religious voters, including Catholics.

On Tuesday, a bipartisan group of faith activists announced the creation of a political action committee that aims to discourage Catholic and evangelical Christians from casting votes for Mr. Trump.

The gap among white Catholics “has narrowed significantly” from a poll conducted during the summer, the report found, when Mr. Trump led by 19 points over Mr. Biden, 59 percent to 40 percent.

The group, called Not Our Faith, will run digital ads in Michigan and Pennsylvania, the Associated Press reported. One ad shows Mr. Trump awkwardly handling a Bible this past summer as he posed in front of an historic church located across from the White House, a photo op made possible after federal law enforcement forcibly removed protesters from the area with tear gas.

“Trump eked out [a win in] 2016 with unprecedented support from white evangelicals and, important to note, a really strong showing among Catholics. We’re going after all of it,” Michael Wear, a former faith outreach adviser to President Barack Obama, told the AP. “We think Christian support is on the table in this election.”

[Voting Catholic: Should Catholics ever be single-issue voters?]

Earlier this month, Sister Deirdre Byrne, who endorsed Mr. Trump at the Republican National Convention in August, led a rosary event for the Trump campaign in Philadelphia. On Tuesday, the Trump campaign released a Spanish-langauge ad claiming the president supports Christian values and attacking Democrats for how they have talked about the faith of Supreme Court nominee Amy Coney Barrett. Catholics for Trump has also organized events in some swing states, including Wisconsin and Pennsylvania, where former New York Mayor Rudolph Giuliani questioned Mr. Biden’s Catholicism.

[Read this next: Trump or Biden? What’s a Catholic voter to do?]