Voting Catholic: Should Catholics ever be single-issue voters? 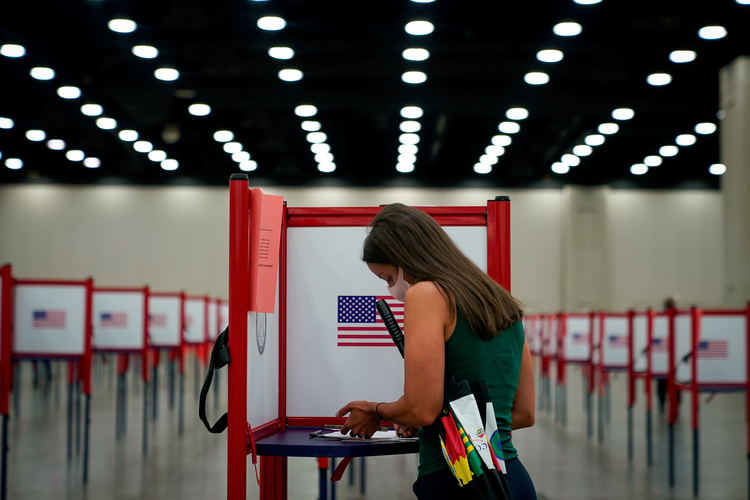 A young voter in Louisville, Ky., casts her ballot during the Kentucky primary election June 23, 2020, during the coronavirus pandemic. (CNS photo/Bryan Woolston, Reuters)

In November 2019, the U.S. Conference of Catholic Bishops released “Forming Consciences for Faithful Citizenship,” a document meant to help American Catholics discern how to vote responsibly. It addressed a range of topics, among them immigration, racism and care for creation. It also included the following statement: “The threat of abortion remains our preeminent priority because it directly attacks life itself.”

When the bishops were drafting the document, Bishop Robert W. McElroy of San Diego made a pointed appeal to his fellow bishops to qualify the phrasing of that statement.

“In my own view, abortion is a preeminent issue for Catholics,” Bishop McElroy told Sebastian Gomes, an executive editor at America and host of its new podcast Voting Catholic. But, he was quick to add, it is “one of several.”

“My concern was that when you say abortion is the preeminent issue we face as a nation, you are setting up an election choice,” he said. According to Bishop McElroy, discerning whom to vote for as a faithful Catholic cannot be boiled down to a single issue and must instead focus on establishing and maintaining the common good.

“The common good is, in Catholic theology, the advancement of the whole series of issues in society which allow the fullest expression and enhancement and achievement of human life and dignity for all people in our society and in the world,” he explained. “To say that abortion is the preeminent issue in a particular political season is to reduce the common good, in effect, to one issue.”

“That’s a distortion of Catholic teaching,” he said. “In fact, the assertion that abortion is the preeminent issue in this political campaign for Catholics is itself a political statement, not a doctrinal one, because it is inevitably rooted in a political analysis of the situation.”

Instead, Bishop McElroy said, U.S. Catholics must assess the entire range of issues.

“To say that abortion is the preeminent issue in a particular political season is to reduce the common good, in effect, to one issue.”

“But,” he challenged, “the house itself and the foundation rest on the earth, and the earth is at stake in climate change and in the care of creation. And so you don’t have a house and you don’t have a foundation if you don’t have the earth. If you don’t attend to the coming catastrophes we are beginning to witness now in the winds and the fires and the hurricanes...there will be no Earth in terms of a habitable place for our humanity.”

Bishop McElroy implored voters to be “attentive to a comprehensive understanding of what our faith teaches us and what Catholic social teaching teaches us. It’s a bad thing to reduce that to any one issue or any small set of issues.”

Ultimately, the role of the church is to “bring us the proclamations of the Gospel,” he said, and not to make political determinations for the faithful. That responsibility, he explained, rests on a well-formed conscience.

“If you’re doing that authentically, then your highest authority is conscience,” he said. “In Catholic teaching, not only can you follow your conscience, you must. It is sinful not to follow a well-formed conscience.”

To hear more from Bishop McElroy, including his discussion on political polarization and what he considers the preeminent issues U.S. Catholics face, be sure to listen to the final episode of Voting Catholic, a new podcast by America Media that helps Catholics discern how to vote in the 2020 presidential election.