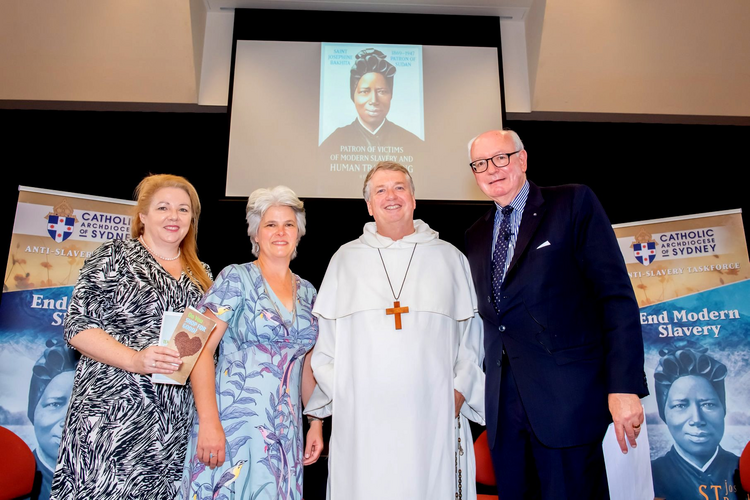 SYDNEY (CNS) -- Archbishop Anthony Fisher and archdiocesan staff welcomed a commitment by the government of New South Wales to enact anti-slavery legislation passed by the Australian Parliament more than two years ago.

The state of New South Wales endorsed the Modern Slavery Act 2018 and supported, in principle, a recommendation to implement the act before the end of the year.

Under the new laws, companies with annual consolidated revenue of over 100 million Australian dollars ($71.3 million) would have to produce public statements detailing how they are keeping their supply chains slavery-free. Modern slavery includes, but is not limited to, human trafficking and child labor.

"I am grateful to the more than 10,000 people who petitioned the government over recent months, calling for an end to the stalling tactics that were delaying the enactment of these laws," he said.

How the church in Australia is working to eradicate modern slavery
John McCarthy, Q.C.

He also said it was encouraging to see the state government appoint an anti-slavery commissioner.

"Our community cannot be indifferent to modern slavery and human trafficking or our responsibility to eradicate it," Archbishop Fisher said. "Like the good Samaritan, we must reach out with a supportive hand to those in greatest need. I look forward to these laws coming into effect and urge the government to ensure this happens before the end of this year."

Alison Rahill, executive officer of the Sydney archdiocesan Anti-Slavery Taskforce, said she was glad to see the state government "call for local councils to face the same reporting obligations on operations and supply chains as state government agencies."

"We know from the experience overseas, in countries such as the United States and the United Kingdom, that when states and counties take the lead on this issue, it breathes a whole new life into it and encourages a response in communities and on the ground," Rahill said.

"We're also pleased to see the government commit to amending the legislation to give the victims of modern slavery access to recognition payments" and to work to consider better ways to protect potential victims, Rahill added.

Provide feedback on this article
Join the conversation: Login or create an account
Before you can comment, you need to update your profile to include your first and last name, as required in our comments policy. Then reload this page and you'll be set up for commenting. Update your profile
More: Australia / Criminal Justice