The church should rid its supply chains of links to modern slavery, says former Vatican ambassador 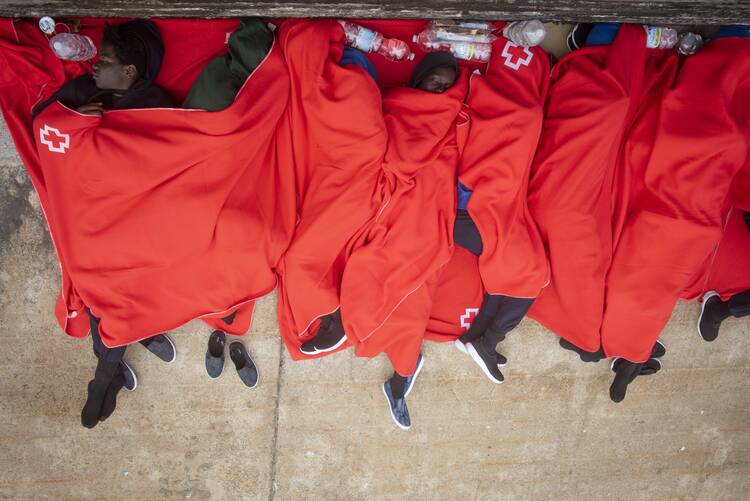 Migrants rest at the port of Tarifa, southern Spain, on July 27 after being rescued by Spain's Maritime Rescue Service. Authorities said 751 migrants were rescued from 52 dinghies trying to reach Spanish shores from northern Africa, this year's most popular route into Europe for human traffickers. (AP Photo/Marcos Moreno)

“Even here in Rome” the phenomenon of human trafficking and compelled labor is present, Pope Francis told pilgrims at St. Peter’s Square. He reminded the assembled, speaking a day before the World Day Against Trafficking in Persons on July 30, that it was everyone’s duty to denounce and oppose the “shameful crime” of human trafficking, “this scourge” that “reduces many men, women and children to slavery.”

Catholic humanitarian groups, including Caritas Internationalis, Dominicans for Justice and Peace, Franciscan International and Jesuit Refugee Service, religious orders and coalitions of women religious joined Pope Francis in an appeal for government and community action in observation of the World Day Against Trafficking. Around the world, perhaps the most publicized victims of human trafficking and modern compelled labor are connected with the global sex trade or domestic servitude. But among 40 million worldwide who are believed to be caught in a trap of forced labor are many millions who work in manufacturing, assembly, agriculture and food services.

“People are trafficked within local settings as well as across international borders for domestic servitude, sexual and labor exploitation, begging, forced marriage, organ removal, surrogate wombs and criminal acts,” said a statement distributed by the International Union of Superiors General, the organization representing the heads of Catholic orders of women.

Forty million worldwide are believed to be caught in a trap of forced labor, including millions who work in manufacturing, assembly, agriculture and food services.

That ratio of victims to trafficking convictions has troubled John McCarthy, Q.C., a former ambassador to the Holy See (2012-16) from Australia who has worked intensely on the issue.

Ambassador McCarthy argues that the offense of human trafficking and modern slavery can never be countered by enforcement efforts alone. He says that the root of the problem must be addressed. That is at the very beginning of the modern supply chain where most contemporary compelled, uncompensated labor can be located.

During a visit to America’s offices in May, the ambassador said that the victims of modern slavery can be found in every country and every industrial sector, but notable high-risk sectors include construction, manufacturing and agriculture. And because of the sheer extent of the supply chains that eventually reach Catholic institutions—a primary example in Sydney are the thousands of school uniforms manufactured in Asia each year for Catholic school children—the possible exposure of the church to modern slavery is enormous.

But, he argued, so is its capacity to respond to the problem, given the church’s size and reach.

Ambassador McCarthy urges the global church to take the lead on fighting modern slavery. By aggressively policing its own supply lines, the church could be an example for other large contemporary institutions to follow, he said. The ambassador had been visiting the United States in an effort to publicize an effort by the Archdiocese of Sydney to get its own house in order. The church in Sydney has begun a pilot program aimed ultimately at ridding the archdiocese’s services, schools and parishes of slavery-tainted goods and services.

By aggressively policing its own supply lines, the church could be an example for other large contemporary institutions to follow.

In March 2017, Archbishop Anthony Fisher, O.P., publicly committed the Archdiocese of Sydney to the program. He said then: “It is not enough for groups such as churches to lecture or exhort the rest of the community in such matters [as modern slavery and human trafficking]. We must demonstrate our own willingness to act where we can.”

That is no small challenge in a global economy where manufacturers and well-known brands often outsource the real work of production to increasingly anonymous subcontractors, obscuring direct corporate connections to unseemly labor practices conditions and diminishing the ethical responsibility to mitigate them.

The Archdiocese of Sydney began its effort with a fact-finding Antislavery Task Force in 2017 that assessed the archdiocese’s reliance on dubious suppliers and eventually established a comprehensive response that included anti-slavery diocesan-wide procurement guidelines; anti-slavery education for officials charged with procurement and parish families; and welfare services for victims of trafficking or slavery.

According to Ambassador McCarthy, the Catholic Church in Australia is both the largest employer and the largest procurer of goods and services in the country outside the public sector—one in five Australian children are educated in Catholic schools and one in 10 hospital patients and elder care residents receive care in Catholic health facilities. So ridding the church’s supply lines of slavery should have a meaningful impact in his homeland. But he wonders what the impact would be if the global Catholic Church committed itself—from the parish school on up to the largest institutions—to purging slave-produced goods from its supply chains.

What if all Catholic parishioners around the world were taught how to avoid products and services that have been connected to human trafficking and compelled labor?

The ambassador ran through a litany of other sometimes vast Catholic-directed or -oriented enterprises—investment funds, development programs, insurance groups. “All of them have millions of dollars at their control, but they don’t have an anti-slavery policy.”

What if all Catholic parishioners around the world were taught how to avoid products and services that have been connected to human trafficking and compelled labor?

“You’ve got to get ordinary people into the big fight to change this,” Ambassador McCarthy told America.

That would have a two-fold impact, diminishing the commercial advantage of slavery while assisting another group that Pope Francis has frequently expressed a special concern for—the world’s 68 million displaced and refugee people. Migrant people are frequently among the most vulnerable targets of human traffickers “both during their journeys and when they arrive in their countries of destination,” according to the statement issued by the consortium of Catholic humanitarian groups. These church humanitarian agencies argue that stopping criminal networks of human traffickers will require the creation of “safe, legal and responsible migration pathways” so that vulnerable migrants and refugees do not feel forced to turn to smugglers to reach their destinations.

Was your car cleaned by a slave? A new app in the U.K. tries to answer.
David Stewart

In addition to ensuring legal pathways to migration are available, the groups called for more government and private collaboration in efforts to educate people at risk of the most common ruses used by traffickers, to run programs in refugee camps on the dangers of human trafficking and to advise migrants on how to protect themselves.

Ambassador McCarthy, who with Katherine Moloney, co-authored a progress report on the Sydney Archdiocesan Anti-Slavery Task Force, hopes to have other dioceses around Australia on board with anti-slavery procurement protocols by next year. After that, he believes he can pressure the Australian government to do the same.

If he can demonstrate the impact of the archdiocese's policies, he said members of Parliament in Australia will have to ask: “Why is it that the Catholic Church can do a better job [on eradicating slavery-tainted goods] than the state can?”

I'm glad that Pope Francis is an outspoken advocate for assisting human trafficking victims. I do my small part to confront the immorality of forced prostitution by occasionally making modest contributions to a service in Philadelphia that provides shelter and other services to women who are human trafficking victims. In regards to labor/worker injustice, each year I make purchases from a Christian -based company that sells products handmade by people who are often impoverished in foreign countries who are paid fair trade wages. I hope that more people who perpetuate the crime of human trafficking will be prosecuted, and that Church agencies will do their best to avoid purchasing products made by forced labor.