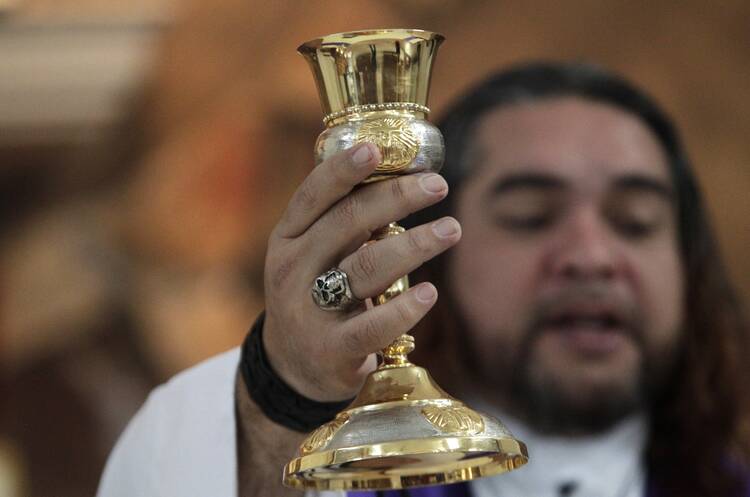 A priest is pictured celebrating Mass in Saltillo, Mexico. A Mexican archdiocese reported that phony priests have increased in numbers during the COVID-19 pandemic. (CNS photo/Daniel Becerril, Reuters)

MEXICO CITY (CNS) -- A Mexican archdiocese has disavowed people posing as priests during the coronavirus pandemic.

The Archdiocese of Toluca, west of Mexico City, said the priests were not in proper standing, but had targeted people wanting to celebrate Mass in their homes and receive sacraments there or at funeral parlors, the newspaper El Sol de Toluca reported Sept. 26.

The newspaper reported "dozens of complaints" from people, some of whom had tried to register the sacraments that they or their family members had received. Attempts to reach an archdiocesan spokesman were unsuccessful.

Archbishop Francisco Javier Chavolla Ramos of Toluca told an archdiocesan radio program in June that he had noticed an upswing in reports of phony priests identifying themselves as part of the archdiocese, according to the newspaper Milenio.

"(A) priest who offers to celebrate a Mass at your house is not valid, he is not a priest, rest assured, he is not a Catholic priest," Archbishop Chavolla said, adding people "from other denominations" were presenting themselves as "bishops" and prelates.

A source with the Mexican bishops' conference said officials had not heard of cases of phony priests emerging during the pandemic.

The coronavirus pandemic closed parishes across Mexico for public services. Priests, meanwhile, often were unable to fully attend to the families losing loved ones or assist with novenas or in-person funerals.

"Pandemics and disasters are like springtime for phony priests," said Rodolfo Soriano-Núñez, a sociologist who studies the Mexican church.

The problem of improper priests is long-standing in Mexico, where dioceses have issued periodic advisories for parishioners to avoid priests not belonging to the Catholic Church.

"There's a of lot of it in big cities ... because many people don't identify with their parishes," said Father Andrés Larios of the Diocese of Apatzingán in western Mexico. In smaller cities, he said, "people know their priests."

Soriano-Núñez said the issue of false priests "lets you see how distant are parish priests from their folk."

"Instead of being close to them and giving away their cellular so people are able to call them, lots of priests in Mexico work as bureaucrats" in diocesan offices, he said.

Soriano-Núñez said some people find phony priests for events such as weddings since they "do not want to attend the two or three hours of (marriage) preparation" or confess prior to the ceremony or reveal the fact that one of the persons is "already married."