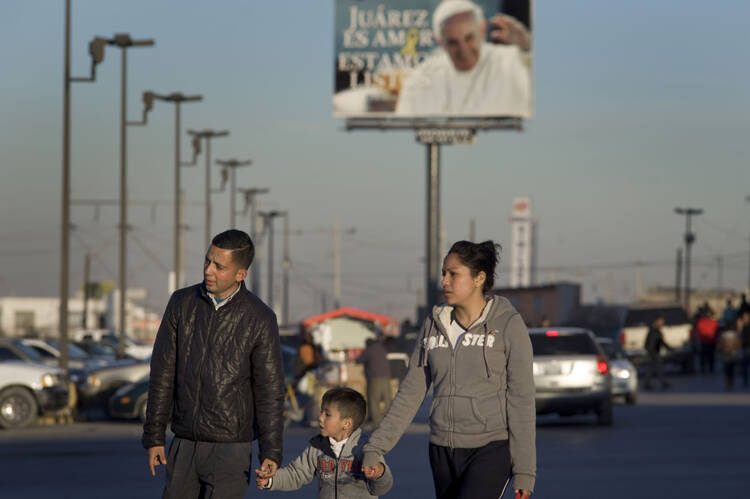 Just in time for rumination before Pope Francis arrives in Mexico—after a brief stop to make history in Cuba with Patriarch Kirill on Feb. 12—the Pew Research Center offers some statistics on the state of Catholicism in Mexico. Mexico is not only home to the world’s the largest Spanish-speaking population, Pew reports, it also represents the globe’s second-largest Catholic community, after Brazil.

“And a larger majority of Mexicans have remained tied to their Catholic faith compared with people in many other Latin American countries,” Pew researchers say. Among its neighbors, percentages in the numbers of adults who identify as Catholic have fallen by more than twice the rate found in Mexico. According to Pew, in Mexico, about one-in-ten adults were raised Catholic but no longer identify with Catholicism.

Like their fellow Catholics around the world, Mexican Catholics are fond of Pope Francis; 86 percent viewed him favorably in a Pew survey from 2013. And in keeping with a revolutionary tradition that at times has been brutal repressive of the Catholic church, “most Mexicans say religious leaders should not have an influence in politics (59 percent) and that religion should be kept separate from government policies (74 percent).

Pew reports, “On these questions, Mexico ranks among the more secular-minded nations in Latin America.”

Another statistical tidbit: the Mexican migration into the United States appears to be reversing, something you probably did not hear during this election seasons presidential debates so far. Pew reports that from 2009 to 2014, 1 million Mexicans and their families (including U.S.-born children) left the U.S. for Mexico. That's according to data from the 2014 Mexican National Survey of Demographic Dynamics (ENADID). U.S. census data for the same period show an estimated 870,000 Mexican nationals left Mexico to come to the U.S., for a net loss of 140,000. Most returning migrants cited a desire to reunite with family members as the main reason for their voluntary return, though a slowing job market in the United States and more opportunities in Mexico contributed to the reverse journey.