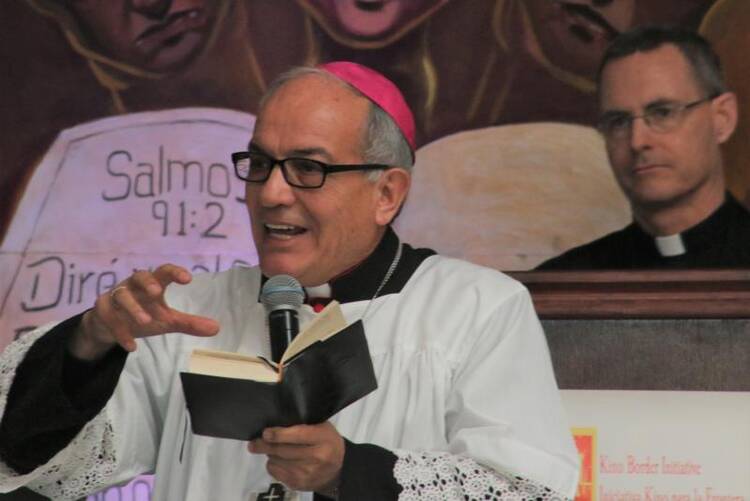 NOGALES, Mexico (CNS) -- Through many "ups and downs," God "has led us to this day," said Jesuit Father Sean Carroll, head of Kino Border Initiative, at the official blessing of a new 18,000-square-foot facility at the international border in Nogales.

The center, in the state of Sonora, is just across the border from Nogales, Arizona, which is in the Tucson Diocese.

More than 400 volunteers, supporters and migrants crowded into the facility Feb. 12 to hear from religious and civic leaders, before Bishop Jose Leopoldo Gonzalez Gonzalez of Nogales, Mexico, blessed and cut a ribbon on the new Migrant Outreach Center.

Tucson's Bishop Edward J. Weisenburger and retired Bishop Gerald F. Kicanas at the Vatican for their "ad limina" visit and were unable to attend.

The $1.5 million facility replaces the humble "comedor," or dining hall, across the street that was established in 2009. Since then, the hall has distributed two meals a day for the poor blocked from entering the U.S. or who have been returned from the U.S. while their asylum cases are pending.

For those same years, the number of women and children seeking refuge at the initiative's Nazareth House, more than doubled from 380 to 839.

Katie Sharar, spokesperson for the Kino initiative, said the new center will have 170 beds for "several thousand" immigrants in Nogales.

Since the Trump administration imposed the "Remain in Mexico" policy last fall, the flow of asylum-seekers into the U.S. has been largely reduced.

Under the policy asylum-seekers must return or be returned to Mexico while their cases goes through the courts. Those crossing into the U.S. at Nogales are detained by Border Patrol, relocated to Ciudad Juarez, Mexico, through El Paso, Texas. They eventually work their way back to Nogales for their court dates.

Last spring the seemingly endless flow of asylum-seekers led agencies such as Catholic Community Services' Casa Alitas in Tucson to open a new and expanded shelter in a former juvenile detention center to accommodate detainees in the U.S.

Sharar said that previous flow of immigrants has virtually stopped.

Meanwhile, Mexican border cities, like Nogales, deal with the crises of growing numbers of refugees.

At the opening celebration for the Migrant Outreach Center, Bishop Gonzalez noted that when he was named as the first bishop of Nogales, he stopped at the comedor on the day he was appointed.

He thanked the media who were present and who have reported on the Kino Border Initiative over the years. "It is because of the media that this work can be known in all of Mexico and all of the United States."

Msgr. Raul Trevizo, vicar for Hispanics in the Tucson Diocese, who also is pastor of St. John the Evangelist un Tucson, started his comments by pointing out the flowers around the face and the heart of a nearby image of Our Lady of Guadalupe.

"The face and the heart together combine to reveal who the person is," he said. "Policies on both sides of the border want to hide the faces and the hearts (of migrants). People are afraid that if we see them, it will change our hearts."

He recounted the story of a good friend who was a supporter of U.S. border policy. Msgr. Trevizo challenged his friend to visit Casa Alitas with him and to see the faces of the people affected by that policy.

"We were there for five minutes and he saw the children's faces and the women there nursing their children," the monsignor recalled.

"My friend is a very big man, and he started to scream. He said, 'Why doesn't someone bring President Trump here so he can see the faces of the people so he can change his mind?'"

Msgr. Trevizo thanked the supporters in the room: "You make us see their faces and their hearts." He added, "The heart of Jesus is at the center of the work of KBI."

"I see the tragedies that are unfolding all over the world," said another speaker, Joan Rosenhauer, executive director of Jesuit Refugee Service USA. "What keeps me up at night is the children." She said she was buoyed to be in "a room full of people who have not ignored the crisis at the border."

The Kino Border Initiative and the new facility "are a model on how migrants should be treated as a people," Rosenhauer said. "It's really important that all of you bring this message to others."

Father Prisciliano Peraza, from Altar in Sonora, Mexico, and a supporter of the Kino initiative from the beginning, recalled the meeting he had with Father Carroll and Bishop Kicanas, to float the idea of the cross-border effort.

"People thought it was crazy," Father Peraza said. "Bishop Kicanas listened and he accepted it and that's how we were able to begin this work 15 years ago."

"This is such a large building," he started, adding quickly, "yet, today this space is inadequate for the need."

He also reached out to thank those who are being served there. "Thank you to our brother and sister migrants. You have helped us to become better people."

Sister Diana Lorena Rubio, a member of the Missionaries of the Eucharist, said the Kino Border Initiative mission was to "be similar to Jesus, who doesn't judge us, who doesn't have prejudice, but who welcomes people in need."

The Missionaries of the Eucharist have staffed the comedor and other Kino relief efforts for years.

Michael Brown - Catholic News Service
Provide feedback on this article
Join the conversation: Login or create an account
Before you can comment, you need to update your profile to include your first and last name, as required in our comments policy. Then reload this page and you'll be set up for commenting. Update your profile
Show Comments ()
Comments are automatically closed two weeks after an article's initial publication. See our comments policy for more.